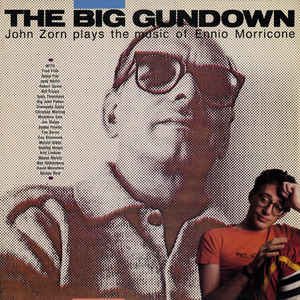 John Zorn is an artist with a boundless imagination who works within a seemingly endless range of settings, styles and orchestrations. Over the years, he has managed to maintain the integrity of his vision and his own independence intact. The Big Gundown stands as one of the most fascinating releases of his spectacular oeuvre. This is a tightly constructed studio project featuring reinterpretations of compositions by Ennio Morricone. The Italian maestro endorsed the project and many of the tracks are drawn from his collaborations film filmmaker Sergio Leone. These reworkings keep the melody in mind but also get very adventurous. Influenced by Carl Stalling’s jump-cut arrangements, The Big Gundown also features an army of contributors performing what David Dacks calls “twisted orchestrations,” – an army featuring Tim Berne, Wayne Horovitz and Toots Thielemans, among others.

Michel Petrucciani was born with every bone in his body broken. Despite this, he rose to become one of the greatest pianists of his generation. Early on in his career, he drew comparisons with such greats as Art Tatum and Bill Evans. Their influence is present on Pianism, the album with which he kicked off a nine-year affiliation with the legendary Blue Note label. Recorded just shy of Petrucciani’s 23rd birthday, this is a stellar piano trio album featuring Palle Danielsson on bass and Eliot Zigmund on drums that is regarded by many as essential post-bop. The tracklist includes compositions by Petrucciani himself, including his impressive 11-minute suite, “The Prayer.” Also on the album are inspired readings of Cole Porter’s standard “Night and Day” plus “Here’s That Rainy Day,” originally written by Jimmy Van Heusen and Johnny Burke.

Saxophonist/free jazz innovator Ornette Coleman developed the musical philosophy known as harmolodics, defining it as “the use of the physical and the mental of one’s own logic made into an expression of sound to bring about the musical sensation of unison executed by a single person or with a group.” Guitarist Pat Metheny experiments with this philosophy on his collaborative album with Coleman himself, Song X, thereby challenging the folk-like and melody-driven style that had defined his music since his emergence. Upon its release, Song X was greeted with some hostilities. However, in retrospect, this is a fascinating experiment that works from the tropical sounds of “Police People” to the frenzied 13-minute track “Endangered Species,” arguably the most representative track of the LP.

British saxophonist Evan Parker is a free jazz pioneer as well as a celebrated player of improvisational avant-garde music. Best known are his solo records, made up of memorable solo, the approach of which Parker himself has described as a manifestation of a desire to create the “illusion of polyphony” on a monophonic instrument: “There is still some sense of dialogue in the music but it’s just one person speaking to himself.” The Snake Decides is arguably the most celebrated of his solo saxophone records. The album features four solos recorded live in 1986 in St. Paul’s Church, Oxford, England by the late great engineer Michael Gerzon. Described in The Penguin Guide to Jazz as “an essential document of modern music,” the recording culminates with an almost 20-minute title cut, which draws on a woodcut of the same name by George Murphy and gives Parker an opportunity to focus on the serpentine qualities of his playing.

In 1986, French filmmaker Bertrand Tavernier, a jazz aficionado, made a film named Round Midnight. This was the half-fictional story of an American saxman and his friendship with a Frenchman keen on saving him from alcoholism, in a portrait of the Paris jazz scene of the ’50s at once nostalgic and tragic. Real-life saxophonist Dexter Gordon played the lead and Tavernier hired pianist Herbie Hancock not only as a supporting actor but as the composer of its score. Hancock put together arrangements of classic tunes plus new compositions in a remarkable soundtrack drawing on a vast and wide variety of styles, moods, genres and tones that earned him an Academy Award for Best Music, Original Score. The session is also loved for its ensemble, made up of some of the best jazz stars of the day, including Freddie Hubbard, Bobby Hutcherson, John McLaughlin, Billy Higgins, Bobby McFerrin, Ron Carter and many others – as well as Gordon, on five of the tracks.