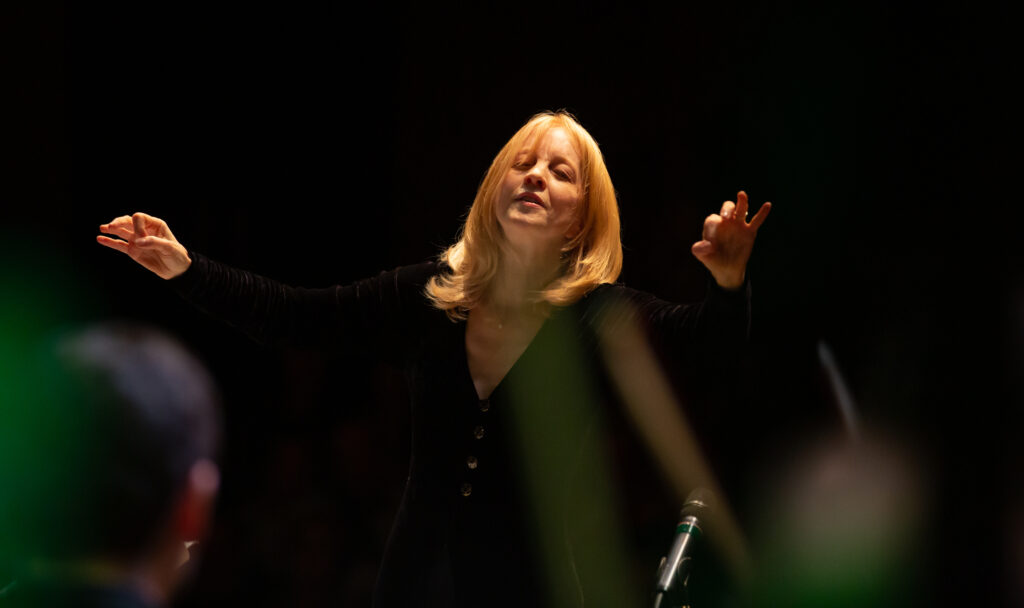 The concert debut of composer, arranger, and conductor Maria Schneider as Artistic Director of the University of Miami’s Frost School of Music Henry Mancini Institute on January 25 was as much a musical event as a statement of purpose.

For the young players, and probably some members of the audience at the university’s Gusman Hall, it was an exercise in musical range. Part of what you get when you have an NEA Jazz Master and five-time GRAMMY winner who has proven as skillful working with The Saint Paul Chamber Orchestra, singer Dawn Upshaw, the later rock icon David Bowie, and her jazz band.

“We wanted Maria as artistic director of the Mancini Institute for several reasons,” said pianist, composer, arranger, and producer Shelly Berg, the Dean of the University of Miami’s Frost School of Music. “She’s one of the great composers alive today. I don’t know if there’s another composer who has GRAMMY awards in both jazz and classical music, and the Mancini Institute is a combination, a mash-up of those two things, so her ability to be in both worlds is very important to us. We’re thrilled to have her.”

Schneider occupies a peculiar space in the jazz universe. She builds her writing around translucent textures, peculiar turns, and a distinct way to musical storytelling, entire pieces unspooling from images of the family’s station wagon down a country road or bird watching. Her music might one moment suggest echoes of European classical music, and an update of the luminous sonorities and quiet power of Gil Evans, one of her mentors, the next. She also sounds as comfortable updating standards as exploring Brazilian pop and Afro-Peruvian rhythms.

“She’s one of the great composers alive today.” — Shelly Berg, Dean of the Frost School of Music

“What I’m hoping to do with the orchestra is to […] feature music from different kinds of composers, not just studio orchestra jazz composers, but [composers for] classical orchestras,” she said in a conversation from her home in New York City, the week before the concert. “And I also want to give people experimenting with writing a chance to write something for a big orchestra like this one. So there are different components to what I’m trying to do, giving players different playing experiences but also inspiring writers.”
Her new position brings Schneider back to the University of Miami, where she spent a semester as a graduate student in 1983.

“I fell in love with a lot of the people here,” she said. She especially noted arranger and composer Gary Lindsay, whom she also acknowledged from the stage at the concert, and the former chair of the Department of Studio Music and Jazz, Whit Sidener. “They gave me tremendous opportunities for writing, they recorded my music, and I stayed in touch with them.”

In fact, “Three Romances,” a piece featured in her Grammy-winning Concert in the Garden, was a commission by the University of Miami’s Frost School of Music. She premiered the piece in 2001, in the same hall where Saturday’s concert took place.
Schneider grew up in Windom, a small town in Minnesota, and credits much of her attitude about ignoring lines between styles and genres to her first music teacher, Evelyn Butler, a classical pianist who, she noted, was also “a terrific stride player.”

“She only ended up in Windom because she had a horrible family tragedy: her son and husband dying within a month of each other,” reminisced Schneider. “So here’s this extraordinary, world-class musician transplanted to this small town and half of every lesson she taught me theory and with that theory, she taught me to play chord changes and a little bit of stride, and half of every lesson was about classical music. But she didn’t talk about their being different. She didn’t label them. It was just like ‘OK, let’s play this Cole Porter song, and here’s how you dress it up. OK. Let’s now work on the Bach Two-Part Invention.’ so I grew up with both things integrated as a part of my own life.”

She reflected the approach in her first program. When Brazilian composer and multi-instrumentalist Egberto Gismonti, who was originally scheduled to be part of this concert, had to bow out to attend “medical issues,” as Berg noted, Schneider called on McCaslin, a long time collaborator. “I was telling him backstage of so much music I would have never written if not for him and everything that he brings to it,” Schneider said in introducing him.

The first half of the concert included “El Viento,” which she described as a combination of the music of German composer Paul Hindemith and the flamenco of Spanish guitarist Paco De Lucia; “Walking by Flashlight,” recorded on Winter Morning Walks (2013) and updated on The Thompson Fields (2015); and “Hang Gliding,” from Allegresse (2000). The last two were performed in impressive arrangements by Bryan Kennard and Alan Hsiao, respectively, both students.

McCaslin’s half of the concert comprised several of his pieces, most of them including vocals, but also two songs by Bowie, including a moving version of “Warzawa” that suggested a requiem. The saxophonist not only participated in Schneider’s work with Bowie but went on to be a key collaborator in Blackstar, released just days before the singer’s passing in January 2016.

The concert “is a chance for us to bring in students from different programs within the music department and offer a chance to some of those who maybe don’t integrate with an orchestra — a rock drummer or rock guitar player – be part of it,” had said Schneider in a conversation before the event. “And then we’ll also have classical players playing with a rhythm section. It’s a chance for them to really feel that feeling of locking-in. The point is to try broadening the experience for everybody.”