Pianist Harold López-Nussa’s forthcoming album Te Lo Dije, due out August 28 on Mack Avenue Records, takes its name for the Spanish equivalent of the English phrase “I told you so.” It’s a fitting title, because if you haven’t started paying attention to this Cuban keyboard sensation yet, you better start soon. He’s already released two phenomenal albums on the Mack Avenue label — Un Dia Cualquiera and El Viaje — and with his latest, he is poised to position himself among the top ranks of modern jazz pianists. So if you blink and next thing you know he’s a superstar, well … te lo dije. 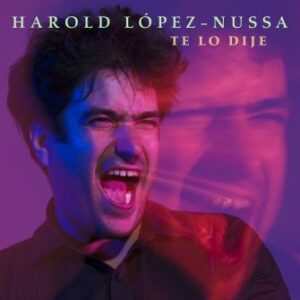 Musically, Te Lo Dije is all about bridging the gap between jazz and Cuban pop music, an audacious project, but one that his working ensemble — with drummer Ruy Adrián López-Nussa, bassist Julio César González and trumpeter Mayquel González — rose to the challenge to accept. “When I first told the guys that I wanted to mix reggaeton with jazz they looked at me like, ‘Are you crazy or what?’” López-Nussa saidin a press statement. “They have nothing in common. The same with Mozambigue or Songo. But I told them it would work.”

And work it does. Songo, Mozambigue, Son Montuno — from a panoply of styles López-Nussa is able to fashion a completely new and totally original musical aesthetic. Even contemporary reggaeton finds a place in his patchwork of sounds, with all of it enlivened by the fleet-fingered jazz style that has become his signature. Te Lo Dije also benefits from the inclusion of a number of special guests, including Afro-Cuban funk superstar Cimafunk; singer Randy Malcom of famed Cuban reggaeton band Gente de Zona; and vocalist Kelvis Ochoa, another longtime collaborator.

Award-winning French accordionist Vincent Peirani appears on the group’s version of “Windmills of Your Mind,” which has its video premiere here. The tune is a nod to López- Nussa’s French ancestry, and for his fondness of the composer Michel Legrand, who composed the score for the 1968 film The Thomas Crown Affair.

López-Nussa’s arrangement preserves the swirling sense of mystery and longing at the song’s core, but injects it with a healthy dose of groove courtesy of a propulsive piano ostinato, a searing solo by Pierani and some white-hot cajon work from Ruy Adrian López-Nussa. Stick around until the end of the video for the funky, chopped-up breakdown, in which the group pivots hard and fast toward a new groove. It’s a bracing and pleasant surprise, as if the tune’s energy suddenly explodes out of its original container.

Te Lo Dije is available for pre-order on the Mack Avenue website. More information on Harold Lopez-Nussa can be found here.