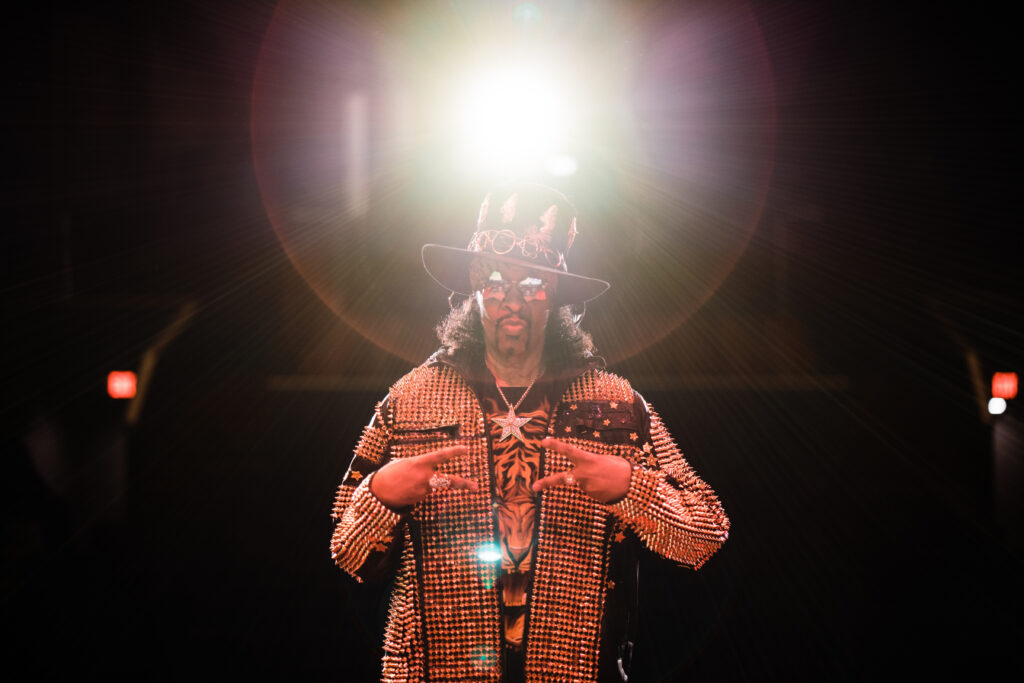 And now for some funkier news…

Bassist, Rock and Roll Hall of Famer and all-around funk guru Bootsy Collins is about his latest album, The Power of the One (Oct 23, Bootzilla Records / Sweetwater Studios).   The album will be available on CD and all streaming services on October 23 and on vinyl in December.  Preorder the album here.

Get on up for the super-galactic ride on Bootsy’s Funkship Area-51 in his new video for “The Power of the One,” featuring George Benson.  True essence of funk is the Power of the One, and it all began when James Brown and his musicians dominated the first count of each measure.

For Bootsy, it’s also a philosophy: “The Power of the One is what pulls us through,” he says.  “Everyone has “The One” inside of them.  You never know who is using you for guidance, so always be pure and never fake the funk.   Everybody’s got a light. Everybody needs to shine.  It’s there, we just have to trust and use the guidance that is within us, and know that The One knows your program.  It was written inside your heart before you made that mad dash racing to be the first one to the egg!  You are perfect in the eyes of The One.”

Produced, co-written and arranged by Collins, The Power of the One began before the pandemic at Sweetwater Studios and was completed during lockdown at his own Boot-Cave Studios in Cincinnati.  “In these tragedies and in these storms is when the most beautiful messages can come out,” says Bootsy.  “Funk is making something out of nothing.  As a team, it’s easier to pursue your dreams.  It’s official:  Family Approved, One Nation under a Groove!”

And with that, Bootsy called on a few of his humble musician friends to join him and let the real party begin.  Now for the pure funk track we call the “Funkship Area-51,” Collins channeled his P-Funk days, with fellow James Brown bandmember, Christian McBride.  Snoop Dogg takes the lead on “Jam On” along with Brandon “Taz” Niederauer on lead guitar, and the song “Creepin’” features blues guitarist Christone “Kingfish” Ingram.

You can join Bootsy on Friday, October 23 at 6:00 pm PT / 9:00 pm ET  for the livestream broadcast event, ‘Bootsy Collins Album Release Galactic Birthday Bash.’  The lineup will be announced shortly, and tickets are available at bootsycollins.com.  Ahead of his birthday, Bootsy reflects, “I don’t ever want to grow up and lose that kid inside of me.  That’s the guy who really keeps me going.  I’m always experiencing and learning new things.”