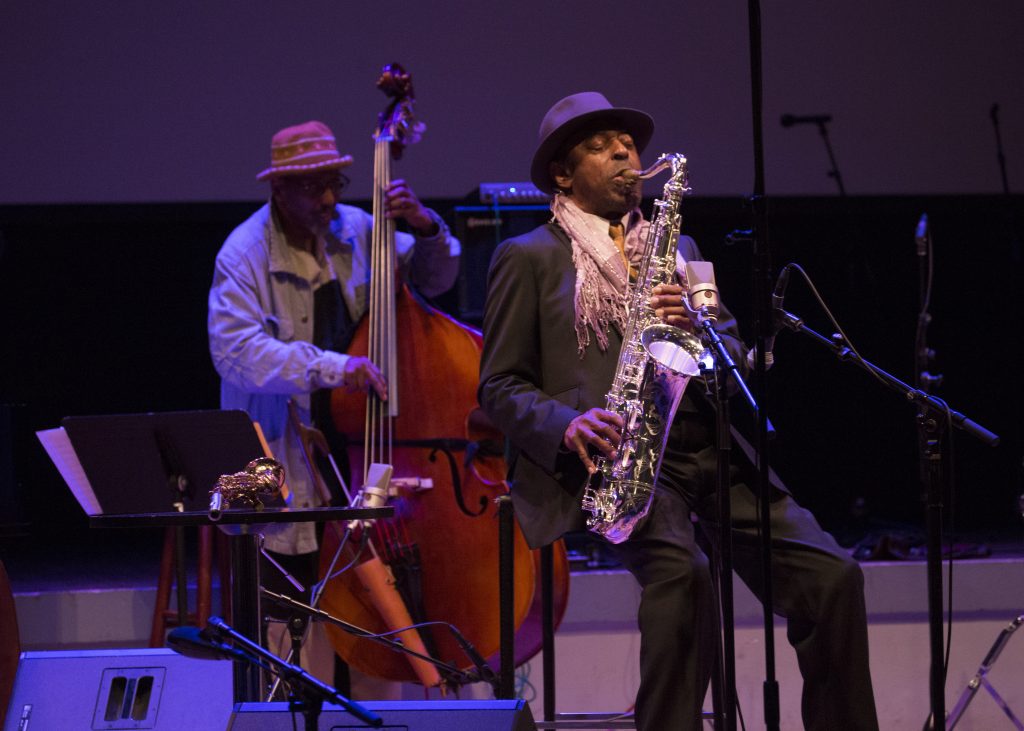 Vision Festival, the weeklong celebration of free improvisation that recently celebrated its 23rd year in existence, has since its founding served as a platform for creative and socially conscious musicians. And though the music championed by this festival is rightly billed as avant-garde (in that it seeks to be future-facing, ahead of its time), the spirit that animates the proceedings belongs to an existing jazz tradition, namely, the politically minded free-jazz of the 1960s, which was set into motion by giants like Ornette Coleman, Albert Ayler, John Coltrane and Cecil Taylor, all of whom were driven by a thirst for social justice and artistic freedom.

The impulse that led to the creation of that early 60s scene is still very much alive, and in our modern political climate, it has reclaimed a measure of strength and acuity. A number of performers at Vision Fest – including the phenomenal quartet Women with an Axe to Grind — grappled directly with the current administration through pointed lyrics and tempestuous improvising. Others – such as the coolly minimalist Matthew Shipp Acoustic Ensemble — opted to divert attention away from the specter of politics, focusing instead on quiet investigations of art. Either way, the connection to those early pioneers remained strong.

The best of the bunch managed to channel their creative energies in myriad directions. The pianist Dave Burrell, for example, who was honored with a Lifetime of Achievement award on the fest’s opening night, seemed to be operating in multiple spheres at once, balancing cleanly articulated composition with improvised pandemonium and social comment. His set was a high watermark in a week full of big moments.

Below is a review of Burrell’s enlightening performance, as well as several other highlights from this year’s Vision Festival.

Born in Ohio and raised in Harlem and Hawaii, pianist Dave Burrell has long been admired for the ease with which he slips between traditional jazz and the avant-garde. His recorded history bears out an uncanny fluidity with genre. High Won-High Two, from 1968, is one such example, culling together a medley from West Side Story, a Harlem-style stride piece and a few cuts of frenetic, convention-shattering free improvisation. Eclectic as it is, it’s hardly an outlier. Further ahead in his discography, one finds solo tributes to Duke Ellington and Jelly Roll Morton, as well as the jazz opera Windward Passages.

On opening night, Burrell appeared in various guises: in the group Harlem Renaissance, a project inspired by the artistic flourishing that took place in Harlem’s African-American community in the 1920s; in a quartet with the saxophonist Archie Shepp, a longtime collaborator; and in a newly assembled quintet featuring the dual saxophone frontline of James Brandon Lewis and Kidd Jordan. The night was a fitting summary of Burrell’s work: In every setting, he displayed the same harmonic ingenuity and rhythmic instinct that has defined his entire career.

A highly attuned improviser, Burrell has a habit of elevating those around him through his own ruminative improvisations. It can be fascinating to watch how subtle changes in his own playing result in rippling consequences for his musical colleagues. In his performance in the Harlem Renaissance ensemble — with Harrison Bankhead on bass, Andrew Cyrille on drums, Darius Jones on alto sax and Steve Swell on trombone — he was cast in simultaneous roles of shepherd and flock. He first led the band through steamy written passages of early swing and blues, and later became part of the fray as the music untangled into trembling threads of improv.

Burrell’s performance with Shepp, 81, reunited the pianist with a longtime friend and collaborator. The pair’s history extends back to the 1960s, and includes highpoints like a joint performance at the Pan-Africa Festival in Algeria in 1969. Shepp, a fire-hearted improviser and vocalist best known for his works Attica Blues and Four for Trane, drew most of the spotlight for this performance, blowing full-throated lines that emerged scathed and scorched from the bell of his horn. Burrell’s piano provided a harmonic equilibrium — steady, limber and poised. But that’s not to say he was subdued. At times he would slash his hands across the keyboard or jab his fingers at a pair of keys in the upper register. It was a thrilling and kinetic thing to behold, but always in service of the music’s collective good.

Burrell’s final set was completely improvised, which provided listeners with a real-time view of his creative process. The music had a highly narrative quality, vacillating between moments of pounding intensity and cavernous stillness. Through it all, Burrell seemed to have some kind of clairvoyant sense about where things were heading. He anticipated with striking precision the headlong shrieks of Jordan’s horn and the coruscating upward swells of Lewis’ improvised lines. The overall effect was that Burrell, a master improviser, possessed a key to the music’s inner-most chambers, and that he was letting listeners in for a better view.

Mary Halvorson, one of today’s most fearless improvisers, appeared with her new ensemble Code Girl, featuring drummer Tomas Fujiwara, bassist Michael Formanek, trumpeter Adam O’Farrill (substituting for regular band member Ambrose Akinmusire) and vocalist Amirtha Kidambi. Performing selections from their self-titled new album, the group held forth with music that was sonically dense and rhythmically nimble, meaning there was little wiggle room, except when there was wiggling to do. Halvorson is adamant that she’s not a poet, but her lyrics prove otherwise. They’re earthy and symbolically rich, distilling themes such as isolation and loneliness into lovely verbal fragments: “These days there’s no real light here/it’s mostly sharply dull,” she sang on “Pretty Mountain.”

Women with an Axe to Grind

Musical gestures were made physical during the performance by Women with an Axe to Grind, as dancer Patricia Nicholson performed a choreographed interpretation of music by flutist Nicole Mitchell, bassist Joelle Leandre and violist Melanie Dyer. The four artists used various elements of sound – chants, whispers, string scrapes, flutters, percussive taps – to create a musical tone poem about the necessity of defiance in the face of oppression. At times that poem became literal, as when Nicholson led her colleagues in a powerful chant: “We will never accept the lies, the pettiness, the greed, the virulent racism or sexism as normal.”

The trio SPACE was originally formed in 1979 by reedist Roscoe Mitchell, vocalist Thomas Buckner and multi-instrumentalist Gerald Oshita. They were a distinguished group, producing a kind of prickly, highly textured art-music that regarded the exploration of sound as a gateway to creativity. After the untimely death of Oshita in 1992, the trio disbanded, though Mitchell and Buckner continued to work together each year. They eventually became acquaintances of Scott Robinson, a free-jazz musician whose instrumental arsenal includes the slide saxophone, the bass sarrusophone and other oddities. The new trio’s performance at Vision Fest was animated by a persistent, crackling energy: Mitchell blew streams of uninterrupted lightning from his sopranino saxophone, while Bruckner emitted glorious, full-bodied intonations to match Robinson’s floor-shaking squawks and squeals.

Seraphic Light – a trio consisting of multi-instrumentalist Daniel Carter, bassist William Parker and pianist Matthew Shipp – was convened for a special purpose: to commemorate the life of visual artist Marilyn Sontag, who was Carter’s partner since 1970. As such, the music held substantial emotional weight, but was swaddled in beauty and grace. Carter’s playing, on cornet and alto saxophone, was fragile and tenderhearted, doled out in lovely vignettes. Shipp and Parker mostly filled in the details with gestures of harmonious support.

The Nasheet Waits Equality Quartet – with bassist Mark Helias, pianist Aruan Ortiz and alto saxophonist Darius Jones – transformed sentiments of anger and indignity toward an unjust world into wall-rattling music of immense volume and mass. Waits was the dynamic engine of this group, unleashing torrents of brash, explosive sound from his drumkit. The set was cranked to 11, fueled by high emotions and raw nerves, but it was also highly musical, and the rhythmic and harmonic shapes that emerged from the rumble were made even more beautiful in their amplified state.

Matthew Shipp’s Inward Motion cast the pianist in the rare role of conductor, overseeing a crack ensemble that included the bassist Michael Bisio, the drummer Newman Taylor-Baker, the violinist Jason Kao-Hwang, the clarinetist Mat Walerian and the trumpeter Nate Wooley. Sparse and calmly executed, the music was in no rush to resolve itself. It advanced deliberately, taking pleasure in examining its own texture and inner mechanisms. Trumpeter Nate Wooley and clarinetist Mat Walerian proved an especially captivating pair. For every atonal growl from Wooley’s trumpet, Walerian countered with a terse and pointed melodic phrase.

The members of Mutations for Justice – vocalist Fay Victor, trumpeter Jaimie Branch, bassist Luke Stewart and drummer Michael Vatcher – began their performance by entering from offstage, carrying electronic candles and chanting a wordless incantation. The whole proceeding had a serious, consciousness-lifting air about it, but was not without a sense of wry humor. The same can be said for their music, which married loose, elastic funk grooves with hooky melodies and hot-tempered lyrics. The project was started by Fay Victor as a way to document her community’s anger throughout the Trump administration, and with titles like “Wikileaks” and “Stormy Daniels, I Love You,” her songs did indeed capture the tumult and absurdity of our times.

Afro-Algonquin began in the 1970s as a vehicle for exploring the African-American and Indigenous musical identities of the group’s founder, Mixashawn Rozie. Since then the group’s musical repertoire has grown to accommodate everything from Curtis Mayfield to Ornette Coleman to Fela Kuti. Their set at Vision Festival – featuring Mixashawn’s brother Rick on bass and Royal Hartigan on drums – typified their genre-straddling approach, incorporating muscular Coltrane-esque post-bop, native Algonquin chants, electric mandolin jams and even a cover of Jimi Hendrix’s “Purple Haze.”

Trumpeter Ambrose Akinmusire, pianist Kris Davis and drummer Tyshawn Sorey first performed together as a trio as part of a residency at The Stone, in Manhattan, earlier this year. Their simpatico was obvious at the group’s Vision Fest reunion. Through their completely improvised set, the musicians hung together with almost telepathic closeness; Sorey, especially, seemed to be intuiting the direction of his fellow bandmates before they reached their destinations. A spacious, cogitative quality presided over much of the set, with musical ideas unfolding in slow, ominous chapters. But at points the energy would change, and suddenly the trio would find itself swarming around a quick, staccato line. The tension between those two moods – and the anticipation ahead of the change – was a thrill in itself.