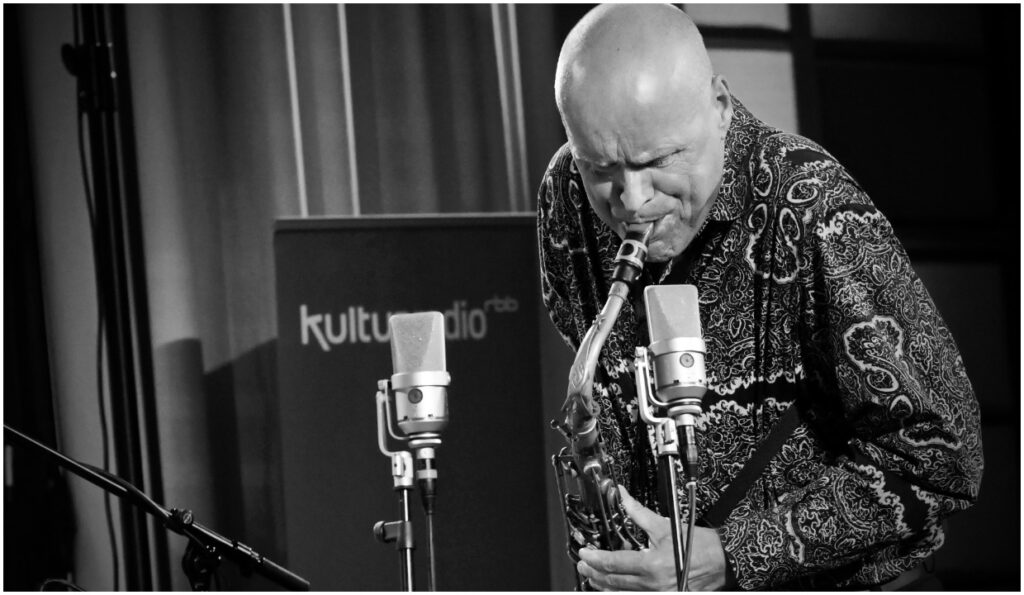 Gebhard Ullmann, one of the most active and acclaimed saxophonists on the German jazz scene, voices his characteristic inquisitiveness on mikroPULS, his new album for the Intuition label, released on October 18. The music on this exciting new record explores freedom and tonality, often blending and mixing diverse traditions, such as the African-American ones of the blues and the microtonality most often associated with Western European compositions.

He’s not alone on this venture. Joining him on this project, an exciting ensemble of fellow musical adventurers – Hans Lüdemann on pianos, Eric Schaefer on drums, and Oliver Potratz on double bass – with all members contributing one or more original compositions to the project.

We asked Ullmann to take us through each track of mikroPULS to understand the inspiration behind each song and some of the work that went into the making of this new album.

“Flutist With Hat and Shoe”

This is a good example of how this quartet combines quarter-tone compositions with more jazz-like chords. While it starts as a modern open jazz ballad with a beautiful melody plus chords, I later introduce a quarter-tone line that is performed in unison by saxophone and piano. Hans Lüdemann uses a sampled grand piano tuned a quarter-tone apart with the original grand piano and plays all microtonal lines with both hands, while I play them with specific fingerings in unison with him on tenor saxophone. The composition as a whole shifts between the two worlds of 24 quarter-steps to an octave. The title, “Flutist with Hat and Shoe,” could be the name of an imaginary surrealist painting.

This is a composition by Hans Lüdemann. It starts with a pizzicato bass solo, while the piano comes in later, introducing the conventional harmonic world before the sax comes in and pushes the music towards the microtonal world. The melody first moves around the G notes and the quarter-tone between G and F# which explains the title “EngeBewegung” (tight movement). Piano and drums are featured as a duo before bass and saxophone bring back the second part of the quarter-tone melody.

A composition of mine dedicated to Eddie Harris’ “Freedom Jazz Dance.” This is one of the key compositions for this quartet. It is about freedom in music and tonality which is the approach that we use from Eddie Harris’ composition while everything else is in 24 quarter-steps leaving the 12 half-step world completely. The introduction is a long unison line between piano and saxophone and drums and bass when they join work completely independent shifting between 6/4 and 7/4 meters while the main theme is loosely in 4/4.

This is a composition that Eric Schaefer brought to the band. It is, again, completely in the 24-step world. It is an intertwining number of four different lines for each instrument, strictly built in four parts with a declining and diminishing coda melody, played in the end by piano and saxophone alone. This may be the composition that is leaning most towards contemporary chamber music, as everything is through-composed.

Written by Hans Lüdemann, this composition is based on “normal” broken chords of which the bottom note moves in quarter tones. It features a bass arco solo in the microtonal world above these chords and a long saxophone solo exploring the world beyond 24 steps of sound and noise. This beautiful piece is entitled “Ankunft” (arrival).

This is a piece written by Oliver Potratz. It starts with a never-ending microtonal world buzzing around the tone B using circular breathing on saxophone. The rhythm section works again completely independent starts and stops while piano and drums move on and add new notes until in the end, they play a cluster of seven quarter-tone and half-tone notes. After the tour de force of this piece, built purely on evolving sounds, it is easy to understand what Oli describes with his title of the piece.

This composition – “Dance of the Microbes” – is in 7/8. It is a good example of the combination of the two harmonic worlds that come together on this CD plus a 7/8 groove from the jazz world with solos. The theme moves through different tonal centers shifting between half steps and quarter steps always re-introducing the “shimmering” of the quarter-tone world.

This is maybe the main ballad of the CD that I wrote a while ago based on a quarter-tone melody with quarter-tone soloing plus chords that keep the melody somewhat “in between.” This piece is dedicated to Charles Lloyd and is recorded here for the first time with quarter-tone piano. Zeit Lupe are two words in German meaning separately time and enlargement glass – and if you put them together (Zeitlupe) it means slow motion.

For more information on Gebhard Ullmann and his new album, visit him online.