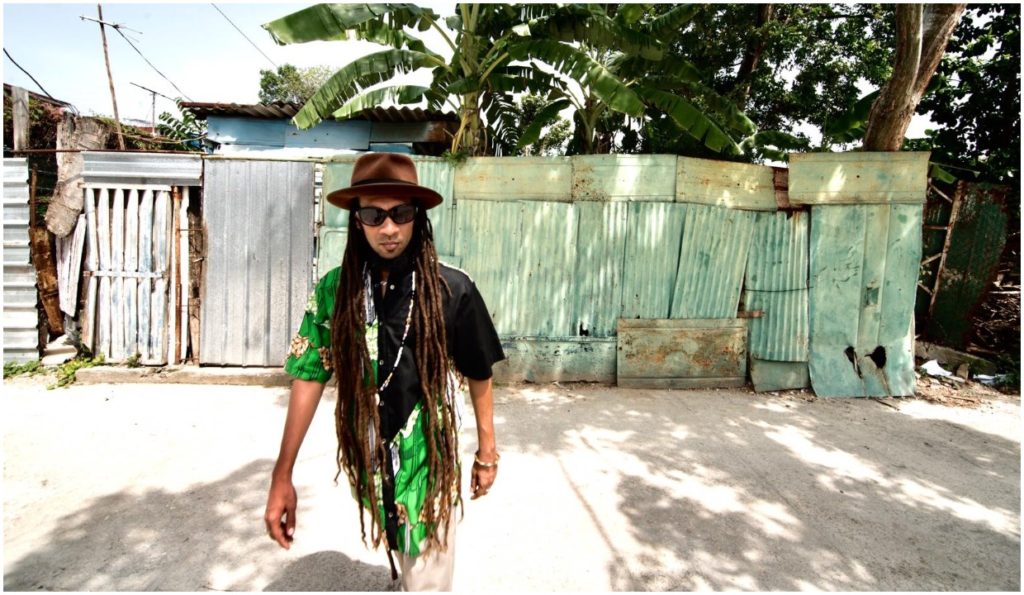 Cuban producer/vocalist/multi-instrumentalist Kumar Sublevao-Beat, a.k.a. Afrosideral, boasts a career of over 20 years, over which he has been involved in many fascinating projects and become renowned for his magnetic stage presence. On September 13, he released his new album, El Olimpo de los Orishas, via Wonderwheel. The LP marks his first major release with his Afrocuban Electronic Ensemble, which blends Afro-Cuban sounds and rhythms with melodies inspired by the Yoruba people, all woven together with electronic threads and duo sensibilities.

The album, Afrosideral explains, is an update of sorts to the Yoruban ancestral traditions and is inspired by the Orishas, deities of the Yoruba people that rule over the forces of nature and the endeavors of humanity. “It’s a multidimensional journey that cleanses you with magic herbs from Osain, to be cared for by the parents of the Orishas – Obatala and Yemaya- and guided by the Odde Orishas,” Afrosideral explains, “including the inseparable brothers Oshosi and Oggun. In this Olympiad, the beat is religion and the song to Eshu is never-ending – leaving the door open for more stories to unfold.”

We asked Afrosideral to take us through each of the tracks on El Olimpo de los Orishas, to understand the inspiration behind each song and some of the work that went into the making of the album.

The first song on this album begins with a tribute to Osain – the Orisha of wild plants, healing, magic and hunting. He understands the languages of animals and plants, represents nature. His songs are essential for beginning any sort of cleansing ceremony or liturgy in the tradition, and his prayers manifest the power within the rocks and the herbs used in the ceremonies.

With this song, my intention is to begin a ceremony. Through the downtempo rhythm, I invoke the magic of nature so as to bring us closer to his inner universe. Collaborating on the song is influential Afro-Cuban instrumentalist Dreiser Durruthy on the batá drums and vocals, giving the song a unique and deep energy.

This song is a prayer to the father of all Orishas, Obatala, a deity that represents consciousness and communication, creator of all humans. Wise, just, generous, pacifistic, always acting from a place of wisdom. Arayé means “problem” – and all of those begin in the mind. Who better than him to liberate us from them?

The music is the result of a collaboration between musicians from Santiago de Cuba. It was recorded at Egrem studios at the Manana Festival, opening the door to the creation of the entire album.

This is a journey across the seas that connected Africa with the new world, its children, who would later become slaves, bringing with them wisdom, songs and the beliefs of their ancestors to places like Cuba and Brazil. This song is inspired by Yemayá (goddess of the sea).

Using elements of Capoeira and Afro-Brazilian instruments, mixed with Afro-Cuban hymns, this song connects us with the Caribbean. Present on this track is Alan Sousa on percussion and Jurandir Santana on the guitar (from Bahía), as well as Cubans Martin Melendez on bass, Ariel Brínguez on the saxophone, Arena Arega on backing vocals – all coming together to create a sound that’s both futuristic and ancestral.

This means “fortune seeker.” This track is a turning point on the album, leaning into heavier house sounds that brings us into the futuristic mountains of Oshosi – master of birds, the hunter, the wizard, member of the Odde Orishas, the warriors.

This is a song from the Iyesá nation to Oshosi – one that’s not very well-known on the islands, but one that stands out because of its various unusual elements – the voices of the Matanza province in Cuba, that are typical of the Afrocuban traditional singing. It’s on this track that the collaboration with Nickodemus (co-producer of the album) shines through as well, given the way the bass launches us directly onto the dancefloor, like a bow and arrow.

Oggún, Oshosi’s brother and also of the Odde Orishas, is the Yoruban god of war and technology. He’s the weapon of the Olimpo de los Orishas. The album is his mausoleum.

I craft my elegy with heavy rhythms, the mystic energy of the forests detachable through the drums alongside deep house sophistication on the hypnotic keys, all atop a soul-grabbing groove that winds flawlessly in and out of the vocals. Many parties for the Orishas involve a musical trance-like element, and this song serves that purpose.

Chango is the love of the drum, the warrior of excellence and the enemy of Oggún. He represents the best and the worst of man – masculine strength and its vanity – at times a righteous leader and others a dictator. Chango is preferred by many seeking power.

With the strength of the Batá drums, the song is balanced by ancestral flutes meant to accompany the dance of “Alaafin de Oyó” (ruler of the Oyó village in Nigeria). The song tempts us into tantric ancestral dance, a song full of fire.

Eshu. The first Orisha on Earth, also known by the Elewá – creator of chaos in humanity after getting Obatala drunk. The messenger of the gods, a trickster of sorts. He plays with truth and lies, traps and clever trucks. Eshu’s represented as the child of the Pantheon and is the Orisha that opens and closes the ceremonial songs.

His is the sweetest music. It’s the sound of the cosmos in every beat of the leather drums, and the seeds in the shakers – woven with the whispers of a sampled ensemble of voices called Sexto Sentido, masterfully interpreting “Barasuayo” – one of the most popular songs of this Orisha. This song paves the road for this gathering of the gods. 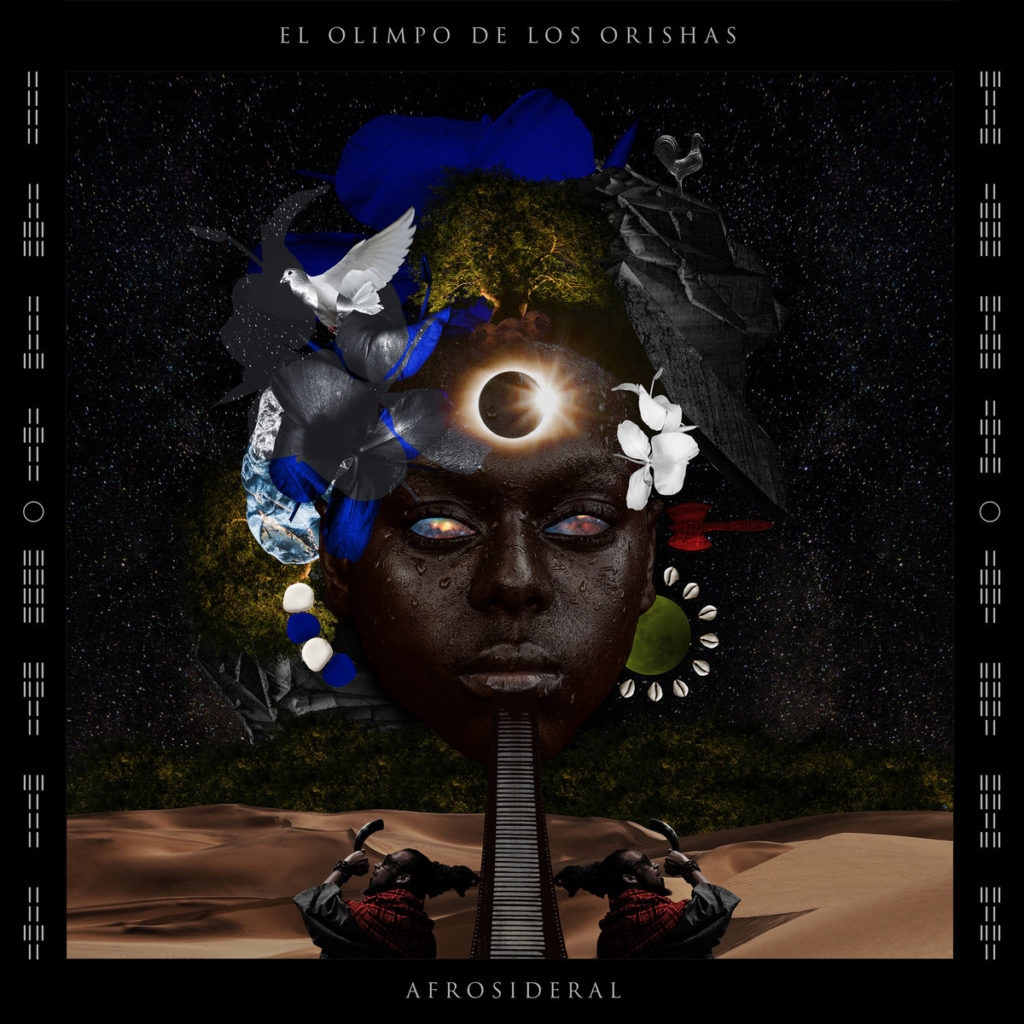 For more information on Afrisideral and his new album, visit him online.