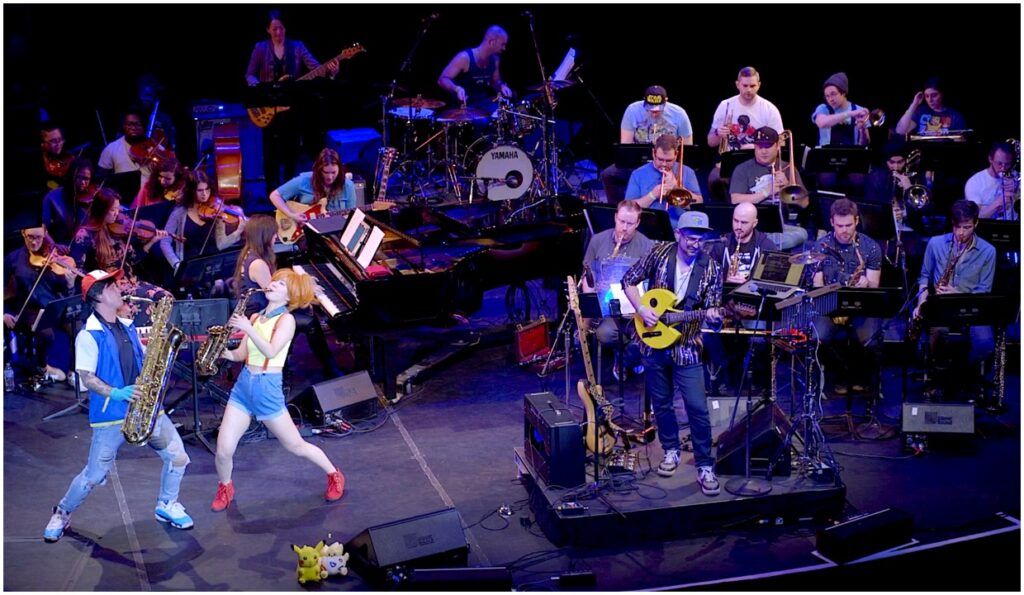 The 8-Bit Big Band, under the direction of 29-year old multi-talented bandleader/composer Charlie Rosen, is redefining the concept of a modern big band. This 33-piece ensemble specializes in original “big band” arrangements of music from some of the world’s most popular video games – and since its inception, it has become nothing short of a viral sensation.

“As a lifelong gamer who also grew up listening to the best in orchestral and big band music, I see the music of many video games as musically equivalent to other great works of music set to media such as film scores and Broadway shows,” says Rosen via a press release. “I truly believe that video game music deserves to be included in a ‘New American Songbook,’ just like classic film and Broadway music has been canonized by the Golden Age American Songbook.”

We asked Rosen to help us get a better grasp of his vision by selecting ten of his best videos, which perfectly illustrate the exciting concept behind the music of The 8-Bit Big Band.

One of the most ubiquitous melodies from the video game music songbook, it’s actually an excerpt from the Russian folk song “Korobeiniki.” Because of that, I wanted to create an arrangement infused with other material from that region of the world including some Tchaikovsky, some Jewish music, Kalinka, and other idiomatic influences through contemporary Big Band instrumentation.

Originally a pop/rock song that ends the game “Portal” this re-imagined arrangement begs the question: What if Nelson Riddle had arranged this tune for Ol’ Blue Eyes to sing in the golden age of big band?

In this video, the first 2 worlds of Super Mario Bro’s are given a full film scoring treatment, totally mapped out gameplay accompanied by a studio orchestra of big band, strings, woodwinds, and choir, with all sound FX performed live by percussionists!

Originally ambient electronic music that accompanies a water level, I wanted to give an orchestrational nod to Kenny Wheeler while imagining this level accompanying a visual cinematic sequence.

“Rosalina in the Observatory (from Super Mario Galaxy)”

The original is composed to resemble a Strauss waltz, in this context we give it a contemporary big band feel featuring clarinetist Mark Dover with influences from Miles Davis’s “Someday My Prince Will Come”

The original already being a nod to Gypsy Jazz, I expanded it to include a violin cadenza upfront and then some Grappelli influence in the tune proper, drawing from other trad jazz horn writing to fill out the rest of the band.

“Zelda’s Lullaby (from Ocarina of Time)”

A 5/4 time signature treatment of this beloved melody from the Zelda franchise, featuring flute phenom Sharpeye.

What would happen if we took this funky classic and expanded it for a big band in the style of New Jack Swing? In this 80s production/big band hybrid I wanted to find out.

A pop/electronic big band arrangement of this quirky tune from the lesser-known series Katamari Damacy sung in Japanese by Kaho Kidoguchi.

To find out more about The 8-Bit Big Band, visit them online.