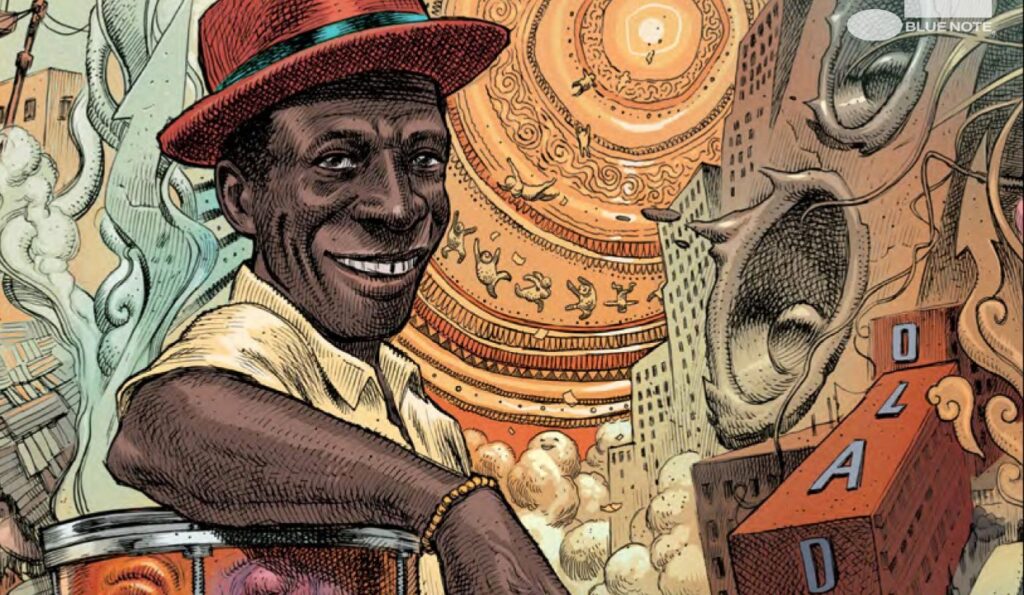 If you’re looking for some great new music to discover this weekend, look no further than our weekly New Release Cheat Sheet. This week, we bring you new music and videos by Tony Allen, the Angela Wrigley Trio, Kiefer, Butcher Brown and more.

Vocalist/pianist/composer Angela Wrigley will release her new album, You Don’t Know What Love Is, on June 18 via Cellar Music. Alongside her trio members Derek Stoll and Dave Lake, plus some stellar contributions, the record finds her representing the pains and gains of being in love, drawing on jazz, rock and pop. Wrigley explains that “Crazy Fool” from the album is about “that person who’s stuck in your head like a bad habit. You know it’s not going to work but the sweetness of nostalgia seems worth it at the time.”

The Hilo Hi-Flyers, “The Island of My Dreams”

“The Island of My Dreams” is a new sun-soaked single from Souther California’s exotic jazz band The Hilo Hi-Flyers, led by vocalist/multi-instrumentalist Kale Stiles. The song, written in the style of Tin Pan Alley, showcases their characteristic sound, which blends tropical tradition with elements of hot swing and Rat Pack-era jazz. “The Island of My Dreams” is featured on the band’s upcoming album, Adventure, due out on May 28 via Hi-Tide Recordings. Pre-order it here.

Pianist/producer Kiefer has shared his take on Roy Ayers’ sun-soaked classic “Everybody Loves the Sunshine,” featuring Theo Croker. This is one of the tracks featured on Between Days, Kiefer’s last installment in his trilogy of EPs, following Bridges and Superbloom. “Between Days is about transition,” says Kiefer via an official statement, “feeling old even though I’m not, missing friends and remaining hopeful.” Order Between Days via Stones Throw here.

Butcher Brown will release their EP, Encore, on June 4 via Concord Jazz, which features five previously unreleased tracks recorded during the same time as their major-label debut, #KingButch. One of the tracks is the fiery “Truck Fump,” which you can hear via the payer below. The band says via a statement that “Encore is full of musical gems from the #KingButch sessions. With these songs, we go further into some of the directions that we tapped for the album.” Pre-order it here.

Michael Wollny, Emile Parisien, Tim Lefebvre and Christian Lillinger are four leading figures in today’s improvised music scene. XXXX is a live album emerging from their week-long collective, free improvisation sets at the A-Trane in Berlin, Germany, from December 2019. The LP distills their collaboration into ten tracks, capturing the joy and emotion shared by the four musicians of this stellar trans-Atlantic quartet. Order XXXX here.

Organist Robert Walter, guitarist Eddie Roberts and drummer Adam Deitch have joined forces as WRD. Together, they are releasing today their debut LP as a trio. The Hit features eleven tracks that invoke an energetic mix of ’70s fusion, funk and soul-jazz. We’re three people pushing, which is really integral for an organ trio. There’s no room for passengers,” says Roberts via a press release. Order it here.

Tony Allen, There Is No End (Blue Note)

There Is No End is legendary and pioneering Afrobeat drummer Tony Allen’s first posthumous release and is out on the one-year anniversary of his passing. The album was produced by Allen, Vincent Taeger, and Vincent Taurelle and its 14-tracks feature guest vocals from Danny Brown, Sampa the Great and Lava La Rue, among many others. Order There Is No End here.