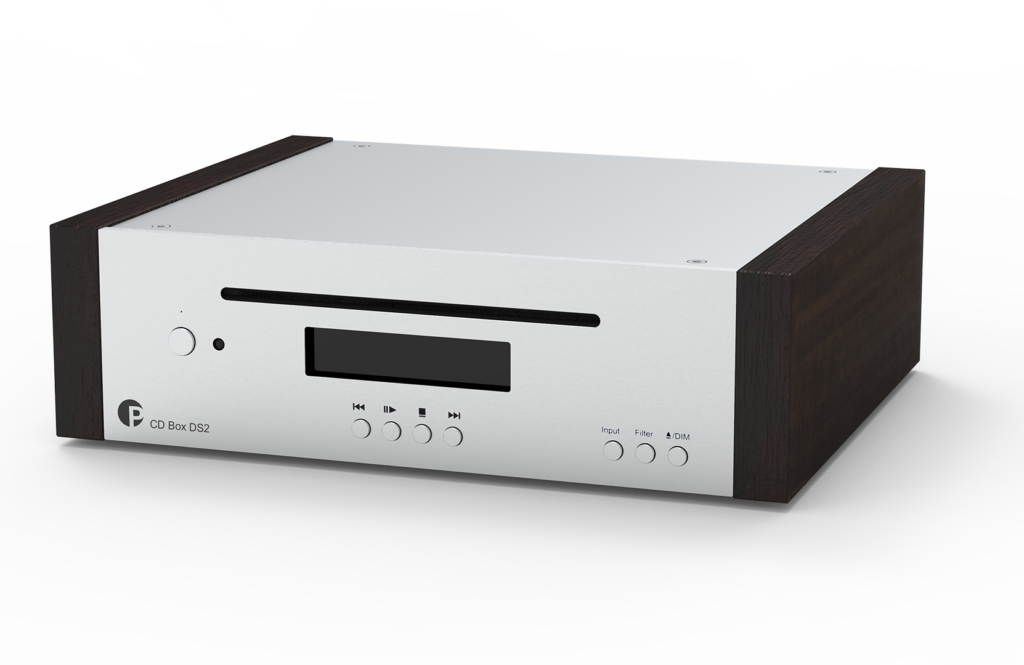 The CD is dead. Long live the CD. There is a certain degree of irony that in the era of digital streaming, vinyl has emerged as the leading physical format for music pushing the CD into the dustbin of history. But is that really the case? The truth; as we’re discovering during the ongoing COVID-19 global pandemic, is somewhere in the middle.

People still buy CDs. Music listeners in Germany, Japan, and China continue to buy millions of new CDs every single year. North American consumers have jumped aboard the streaming locomotive (more than 50 million paid subscribers in 2019) giving the format almost 85% market share in less than five years, but they are also still buying CDs and records. Consumers purchased 46 million CDs in the United States in 2019. Yes – that is a far cry from the 942 million they purchased in 2000 but there is still demand.

A pre-COVID trip in early March to Princeton Record Exchange uncovered bins of new and used CDs; used jazz titles from the JVC XRCD Series have been fetching between $50 and $100 each depending on the scarcity of the release. Rare SACD and MoFi gold CD releases are selling for twice their original asking prices. Two of my local record dealers in NJ report strong CD sales via their Discogs online stores and a growing list of customers.

New CD players are also being released by McIntosh, Rega, Audiolab, Luxman, Cambridge Audio, Marantz, NAD, Bel Canto, Yamaha, and Naim so it’s hard to write off the format if manufacturers continue to support it.

The resurgence of vinyl has been a boon for companies like Pro-Ject Audio Systems; the world’s leading manufacturer of turntables who decided to expand its operations to keep up with global demand. That uptick in business enabled Pro-Ject to invest its considerable engineering and manufacturing resources into a wider range of audio components (amplifiers, streamers, headphone amplifiers, loudspeakers) that are selling well and pushing the envelope from a price/performance perspective. These “lifestyle” components are serious pieces of hi-fi kit designed to offer complete solutions for music listeners who demand performance; albeit in a much smaller physical package.

For those transitioning to working remotely, the six levels of Pro-Ject components offer a very compelling road map for building a high-end desktop or home audio system that will not break the bank. Pro-Ject builds its components in Europe and there is a lot to like about the form factor which is very space friendly.

One of the most interesting components in the 2020 line-up is the CD Box DS2 CD player/transport/DAC ($799.00 – $900.00 depending on finish) which has proven to be quite the performer over the past two months.

The CD Box DS2 is not a very large component (8”W x 3”H x 8”D) and will take up less space than even a large hardcover book making it ideal for a media unit or even bookshelf. The walnut endcaps are a welcome touch giving these somewhat utilitarian looking components some necessary warmth and depth.

The high contrast dot-matrix display conveys a lot of information which is easy to read from across the room and I found myself drawn to the teal blue color which isn’t irritatingly bright with the lights off.

The supplied remote is of the plastic variety that you consistently see at this price point which I found disappointing, but it does deserve high marks for its usefulness. You do not want to lose this remote unless you enjoy fiddling with the 8 buttons on the front panel.

The slot-in mechanism works very well; the CD transport is very quiet, reliable, and it’s clear that the transport has been properly isolated from vibration and RFI. Over the years, I’ve owned CD players and transports that were substantially noisier and less reliable so Pro-Ject clearly put a lot of thought into both the mechanical and electrical engineering of the CD Box DS2.

Pro-Ject selected the AK4490 DAC chip for the CD Box DS2 which makes it compatible with high-resolution digital tracks. It also features 4 digital inputs which only adds to its versatility as a standalone DAC. The USB input can be used with any computer and offers high resolution file support for PCM up to 32-bit/384kHz and even DSD256. The optical and coaxial inputs can be used up to 24-bit/192kHz.

The CD Box DS2 also offers digital filters to shape the sound to your liking; 5 filters for PCM files as well as 2 filters for DSD can be chosen. It also offers two digital outputs to further pass a digital signal to another digital to analogue converter. A line level RCA output can be used for any pre- or integrated amplifier.

Having ripped 2,000 CDs to a dedicated Roon server over the past few years, I have not focused so much on my dusty CD collection but all of that changed when I inserted the CD Box DS2 into both my reference rig and home office system. 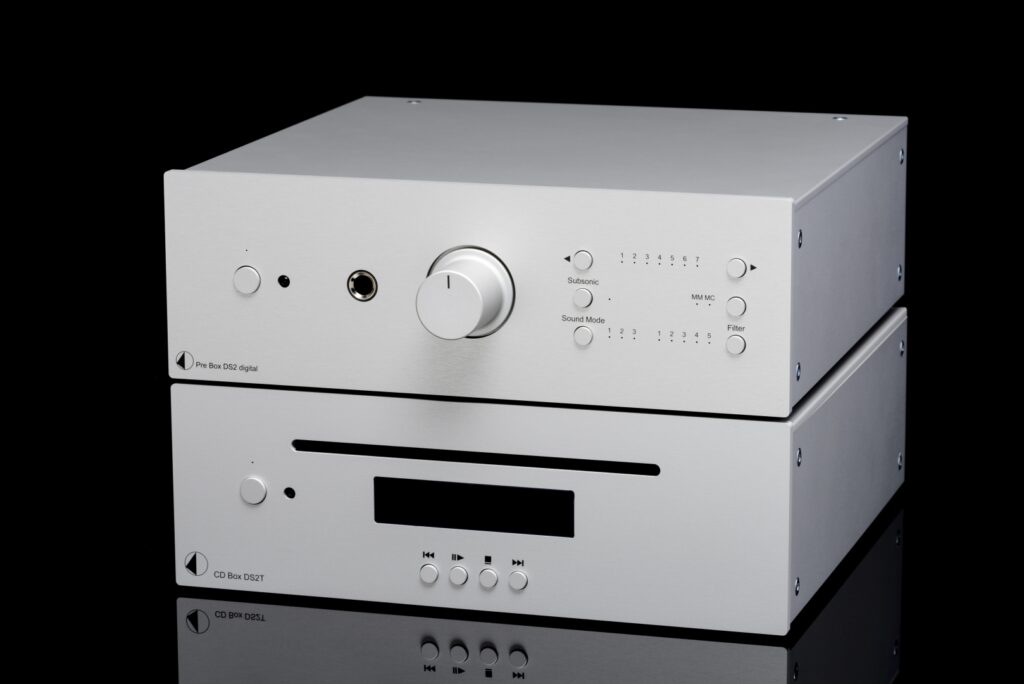 Ella Fitzgerald and Joe Pass’ Take Love Easy (JVC XRCD, JVCXR-0031-2) has been available on both Tidal and Qobuz for a number of years as a high-resolution 24-bit/48kHz stream, but the CD clobbered it in every meaningful way; depth, resolution, and the richness of Fitzgerald’s voice. The streams sound quite good, but they don’t reach out and touch you in the same way.

The CD Box DS2 split its time between the Schiit Audio Ragnarok 2, Cambridge Audio Edge A, and Bluesound PowerNode 2i integrated amplifiers and the way that it breathed life into CDs long forgotten kept my mind focused on music and not COVID-19 which has turned New Jersey into a prison.

The DCC CD release of Wes Montgomery’s So Much Guitar (Riverside/DCC GZS-1078) is a tone monster and the CD Box DS2 soared through “Cotton Tail” and the rest of the tracks; the CD version had more detail, tonal color, and soundstage depth than any version available for streaming.

The CD Box DS2 was consistently good with most CDs but it will not turn horrible recordings into good ones; even switching between the 5 PCM filters did not act as a panacea. Great sounding CDs benefitted from the quality of the internal DAC and output stage and on that alone the CD Box DS2 would earn a solid recommendation.

When used as a standalone DAC, the CD Box DS2 delivered a robust and incisive presentation while being fed high-resolution streams from both Tidal and Qobuz; with slightly less warmth that I was hearing from the same CDs. Ella Fitzgerald sounded more vivid and tightly anchored in the recording space but with less body.

Music moved along with great pace regardless of source and that was a boon with jazz, blues, and rock recordings. There is nothing holding back music through the CD Box DS2.

Used as a CD transport into two integrated amplifiers with their own internal DACs, and two external DACs demonstrated the versatility of the Pro-Ject unit. Very few music listeners are likely to use the CD Box DS2 with a $5,000 DAC or $6,500 integrated amplifier but at no point did it sound out of place or embarrassed by the significantly more expensive competition.

If you still listen to CDs or are looking for an one-box interface for all of your digital streaming platforms, the Pro-Ject CD Box DS2 performs even better than advertised and is well worth the asking price. Highly recommended.

A Musical Boost: 5 Phono Pre-Amplifiers That Will Make Listening to Vinyl Better When Working Remotely