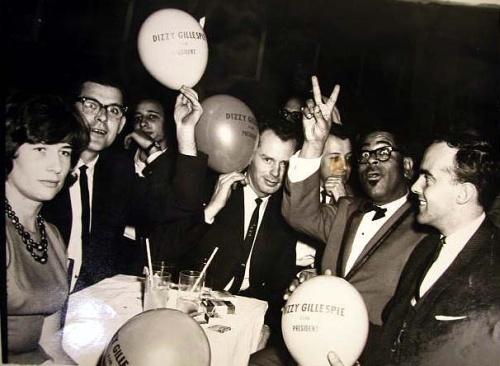 Trumpeter Dizzy Gillespie wasn’t only a key innovator of bebop and the jazz idiom at large; he was also known for being a prankster whose mischievous humor occasionally got him in trouble. He played his most remarkable prank in 1963 and 1964, when he got as close to becoming president of the United States as a black jazzman possibly could. 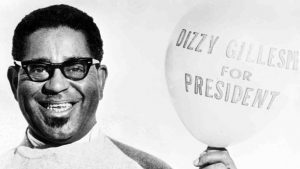 His campaign started as a joke. A few years earlier, his booking agency had buttons with the slogan “Dizzy Gillespie for President” as a gag. The very same buttons were enlisted in his campaign, which kicked off during a staged rally in Chicago. Proceeds from the sale of the buttons went to the Congress of Racial Equality (CORE).

The Dizzy Gillespie band played at the 1963 Monterey Jazz Festival. Their performance was recorded and released in an album titled Dizzy for President. On stage, the band performed one of Gillespie’s most famous numbers, “Salt Peanuts,” which had been reworked in a version titled “Vote Dizzy,” and included such lyrics as “Your politics ought to be a groovier thing / Vote Dizzy! Vote Dizzy! / So get a good president who’s willing to swing / Vote Dizzy! Vote Dizzy!” 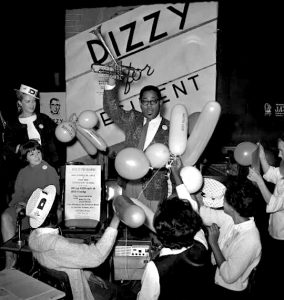 “Vote Dizzy” became the official song of the campaign, which had been designed by Jean and Ralph Gleason. The latter even started using his jazz columns to promote his candidate. The following year, fans of Gillespie had successfully formed the formed the John Birks Society, which had chapters in 25 states, and tried unsuccessfully to get him on the ballot in California.

In his autobiography, the trumpeter said that his reasons for keeping up with the campaign was that “the proceeds from the sale of buttons went to CORE, SCLC (Southern Christian Leadership Conference) and Dr. Martin Luther King, Jr., and I could threaten Democrats with a loss of votes and swing them to a more reasonable position on civil rights.” 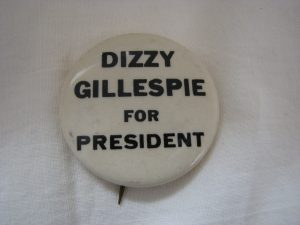 So, his was more than a mere provocation. Furthermore, the the U.S. presidential campaign came down to Democratic President Lyndon Johnson and his Republican challenger Barry Goldwater. Goldwater in particular was a conservative who endorsed extremism and had voted against the civil-rights bill. Goldwater fought back the provocation by stating that his favorite jazz player was Dixieland trombonist Turk Murphy.

Of course, Gillespie could never truly have had a chance of running, but his staged campaign remained significant nonetheless. Plus, if he had been elected as president, he promised to change the name of the White House to “the Blues House,” and to have Duke Ellington as Secretary of State; Miles Davis as Director of the CIA; Max Roach as Secretary of Defense; Malcolm X as Attorney General; Charles Mingus as Secretary of Peace; Ray Charles as Librarian of Congress; Louis Armstrong asSecretary of Agriculture; Mary Lou Williams as Ambassador to the Vatican, and; Thelonious Monk would be Traveling Ambassador. Now, doesn’t that sound groovy? 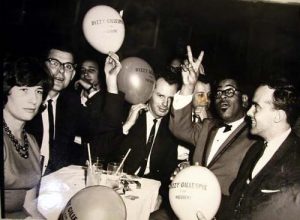 5 Record Store Day Releases That You Need to Know: August 29