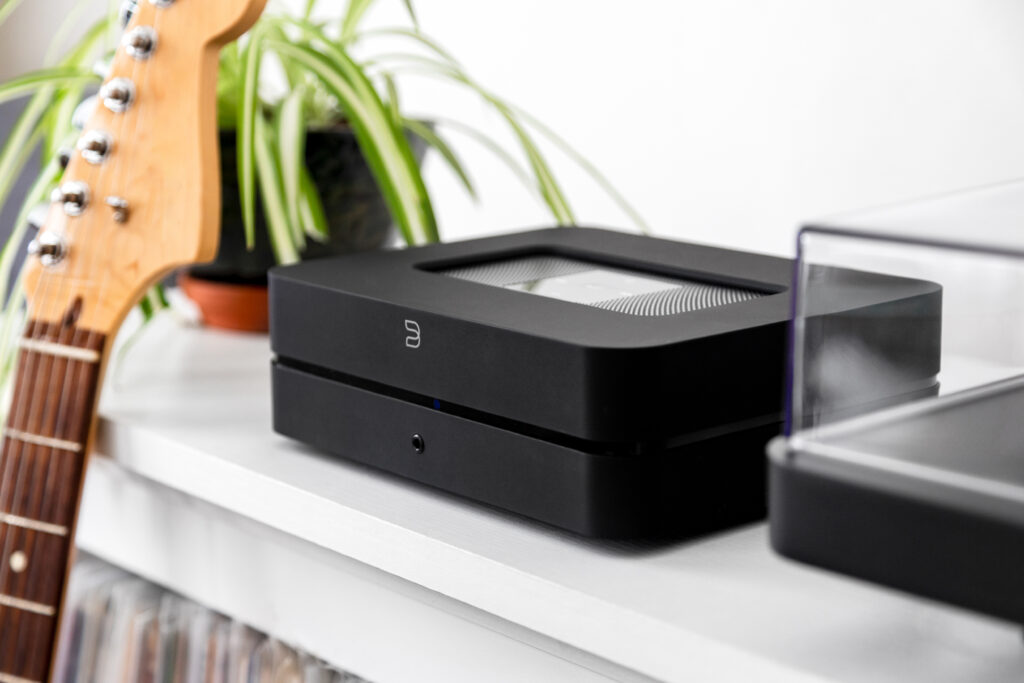 Digital music streaming is barely a decade old, but it is clear that the platform has matured and grown beyond expectations; very few formats have ever commanded such a large market share or offered so much choice this quickly. My 72-year-old mother streams music via her iPhone to a wireless Bluesound Pulse Flex 2i portable loudspeaker in her Florida kitchen; it took me years to convince her to use a Roku or communicate via email so her recent adoption of Tidal is a sign of the times.

Even those of us committed to vinyl and CD playback have taken the plunge with multiple streaming libraries scattered across Spotify, Tidal, Qobuz, and Amazon Music HD. Choice and access to millions of tracks have proven to be a godsend for tens of millions of customers in the United States alone. The icing on the cake is that high-resolution audio streaming is even better if you have the hardware to hear the improvements in sound quality that it can provide; something the Bluesound PowerNode 2i ($899.00) does remarkably well in a very compact package.

With its 32-bit/384kHz DAC, the PowerNode 2i supports all of the high-resolution audio formats including MQA which makes a significant difference with streaming platforms like Tidal.

Digital network streamers like the Cambridge Audio CXN V2, Sonore ultraRendu, and Bluesound Node 2i deliver access to the same libraries of music as the PowerNode 2i but without an internal power amplifier.

Bluesound has packed a lot of technology into the PowerNode 2i; high-resolution audio streamer, DAC, power amplifier, headphone amplifier, and wireless multi-room streaming. With a footprint smaller than a shoebox, the PowerNode 2i requires nothing more than a bookshelf and cable access to become the hub of a multi-room system for an entire home.

The PowerNode 2i features a HybridDigital™ amplifier that can deliver 60 watts per channel into 8 ohms and don’t be fooled by its size; this powered streamer can drive a lot of loudspeakers with ease.

Home theater users can connect the PowerNode 2i to Blu-ray player or UHD 4K television via the HDMI input (ARC and eARC connectivity), and to a subwoofer through the mono subwoofer output.

All of this technology packed into the PowerNode 2i would be for naught if the control app was an unmitigated disaster and the sound quality did not offer a comparable level of performance to that of an integrated amplifier like the Cambridge Audio AXA35 used in conjunction with a DAC like the AudioQuest DragonFly Cobalt which retails for a lot less money.

The PowerNode 2i is controlled through the BluOS app (available for both iOS and Android) and where it earns its stripes is in the integration of the various streaming services into one platform. Bluesound also allows you to adjust the EQ of the PowerNode 2i through the app, and control multiple Bluesound wireless streamers and loudspeakers in use throughout your home.

I experimented with both wireless streaming and a hardwired Ethernet connection to see if there was any appreciable difference in sound quality; the hardwired connection was only marginally superior which surprised me. The real benefit was the stability of the signal which was not dependent on the wireless performance of my ASUS router which was located in the next room or that of my iPhone which consistently has issues with Bluetooth-enabled headphones and loudspeakers.

The PowerNode 2i has a distinct sonic signature that showed up almost immediately with Lee Morgan’s “The Sidewinder” (The Sidewinder, Qobuz, 24-bit/192kHz); horns had more than enough bite but without an excess of energy that would make anyone reach for the volume control. The PSB Alpha P5s and Q Acoustics 3050i loudspeakers were used throughout my time with Bluesound streaming amplifier and it was the sibling from PSB that won the day consistently.

The PowerNode 2i is most certainly warmer sounding than something like the Audiolab 6000A integrated amplifier or even the Cambridge AXA35 which makes it ideal for neutral sounding loudspeakers from PSB, Paradigm, Monitor Audio, and even Klipsch. There is a boldness to the sound that lost some of its control when used with the warmer sounding 3050i which can go much lower in the bass department than the smaller PSB bookshelf loudspeakers.

Rather than bring a sense of solidity to the bass, the PowerNode 2i created an excess of low-end response that overloaded the room (with the speakers almost 3 feet from the wall behind them). When I switched out the PowerNode 2i for the Cambridge Audio Edge A integrated amplifier, the leaner sounding British kit took command of the 3050i and created a totally different sonic experience; the restraint that can make the 3050i sound too polite was curtailed and bass tightened up.

Comparing the $900 PowerNode 2i to a $6,000 amplifier might not be a fair fight, but it only illustrated what I heard with the two amps driving an $800 pair of loudspeakers that are likely to be considered by a potential PowerNode 2i buyer.

Switching gears, the PowerNode 2i was the perfect match for the PSB Alpha P5 which need some added warmth in the midrange and punch in the bass. 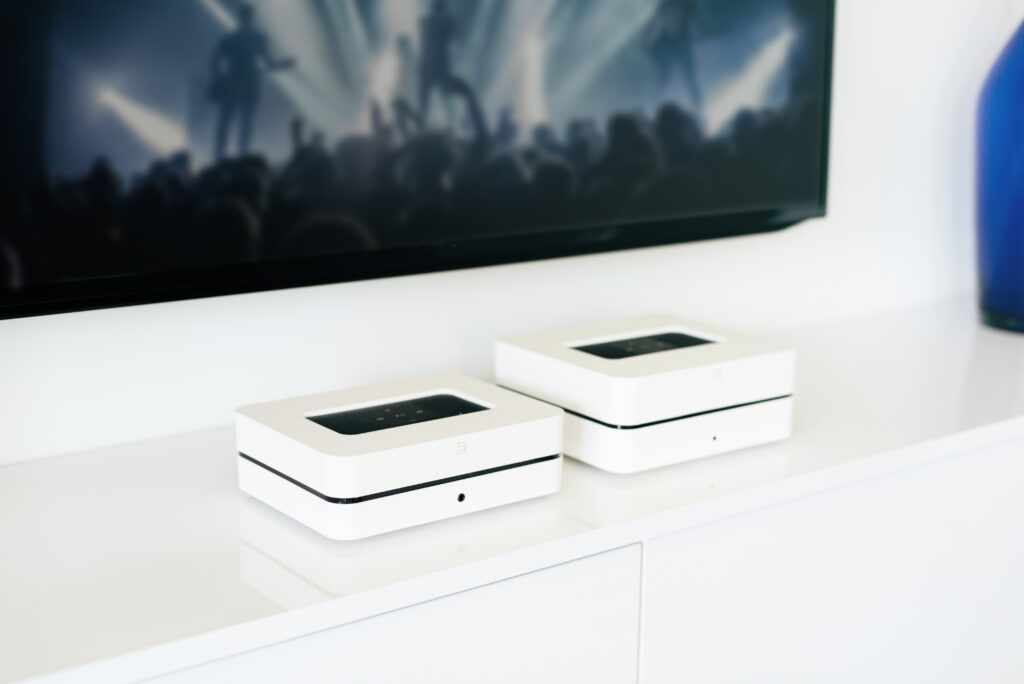 Jason Isbell’s “Cover Me Up” (Southeastern, Qobuz, 16-bit/44.1kHz) filled my listening space with a palpable sense of flesh and blood and conveyed just how adept the PowerNode 2i is at recreating the moment in the room. Depth and soundstage width were excellent through this combination and was often the case with well-recorded albums. Flat sounding recordings don’t transform themselves with the PowerNode 2i but there is no question that this streaming amplifier is capable of making music come alive with the right pair of loudspeakers.

The absence of a phono stage is a strike against the PowerNode 2i, but one can be connected through the 3.5 mm input with an adapter if listening to vinyl is a priority.

Power is certainly not an issue with the PowerNode 2i as long as you use relatively efficient loudspeakers. The Alpha P5 were driven to very loud levels throughout and ran out of gas long before its sibling was even breaking a sweat.

Who is the PowerNode 2i for?

If you have already invested your money in platforms like Spotify, Tidal, Qobuz, and Amazon Music HD, the PowerNode 2i offers almost seamless integration of those services in a beautiful sounding streaming amplifier that has no competition at its price when it comes to sonics, feature set, and usability.

With support for Alexa when used with an Echo, multi-room wireless connectivity, MQA, and almost every streaming service, Bluesound has created a workhorse of a product that might serve as the hub of your home audio experience for many years to come.

A future audio classic worth owning at a very fair price.

Bluesound Audio Buyer’s Guide: Your Music. Your Home. All In Hi-Res