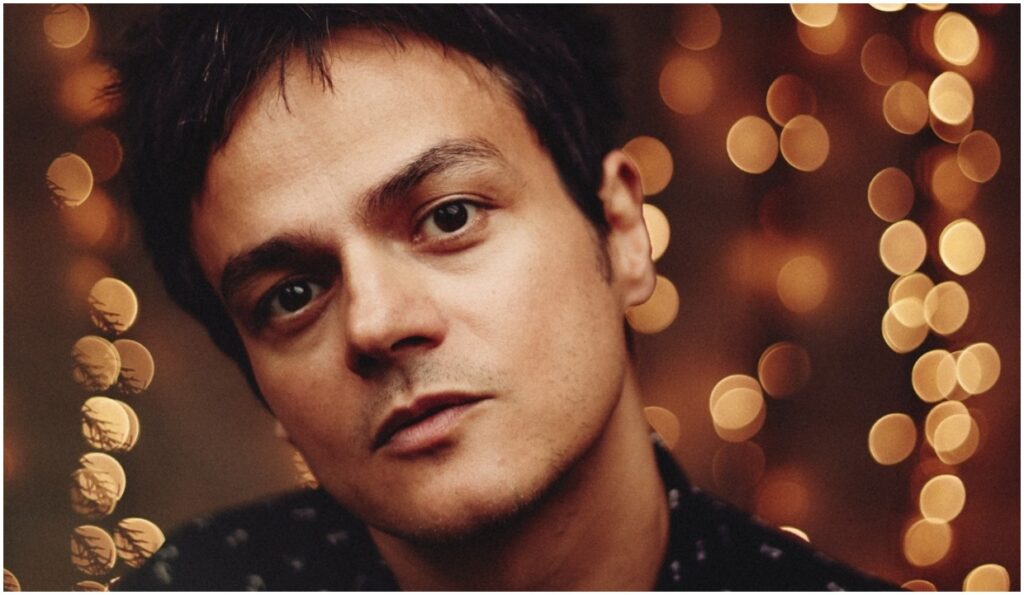 Stevie Wonder Shares First New Music in 15 Years: Stevie Wonder released two new songs earlier this week, “Where Is Our Love Song” and “Can’t Put It in the Hands of Fate.” Both powerfully explore the theme of systemic racism. This is the first new music the legendary artist has released in 15 years. The songs were released via his newly-formed label, So What The Fuss Music.

Jamie Cullum to Release His First Christmas Album: Pianist/vocalist Jamie Cullum has announced the release of his first full-length Christmas album. The Pianoman at Christmas, recorded earlier this year at London’s Abbey Road Studios, will include ten original songs and features a 57-piece big band. It will be released on November 20 via Island Records and you can listen to its first single, “Turn On the Lights,” via the player below.

Jazz Dispensary Announces Vinyl Me, Please Series: Jazz Dispensary has partnered with Vinyl Me, Please, to release special limited colored vinyl editions of five of the finest jazz-funk recordings from its “secret stash.” The series kicked off earlier this week with the release of David Axelrod’s Heavy Axe from 1974, and will continue over the next months with Bernard Purdie’s Purdie Good! (1971), Idris Muhammad’s Black Rhythm Revolution! (1970) and Leon Spencer’s Where I’m Coming From (1973). Those who purchase the full bundle of albums will also be gifted with a limited edition beanie. 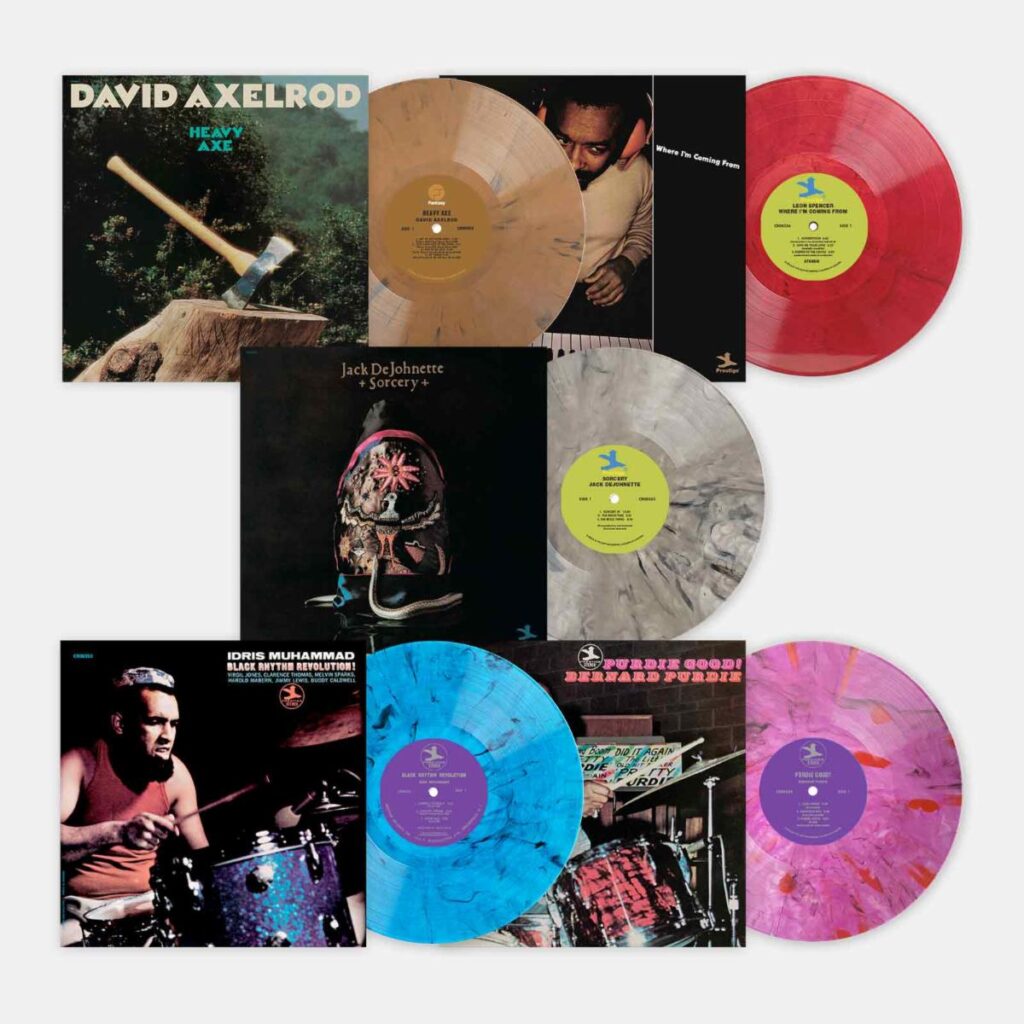 Concord Theatrical Announces Irving Berlin Video Series: Concord Theatricals has announced a new video series celebrating the 85th anniversary of Irving Berlin’s 1935 musical film Top Hat, starring Ginger Rogers and Fred Astaire. These videos will feature modern renditions and brand new choreography for some of the film’s iconic songs, including “Cheek to Cheek,” “No Strings (I’m Fancy Free)” and “Isn’t This a Lovely Day (To Be Caught in the Rain).” The latter is the first song to be shared from the series, performed by The Powder Room and was directed/choreographed by Al Blackstone.

Charles Lloyd Livestream Concert, October 23: The Charles Lloyd Ocean Trio featuring Gerald Clayton and Anthony Wilson will be streaming an exclusive pay-per-view performance live on October 23 from Santa Barbara’s historic Lobero Theatre. This will be a new installment in the Lobero’s series of specially-priced, live-streamed concerts and follows shows with Kenny Loggins and KT Tunstall. 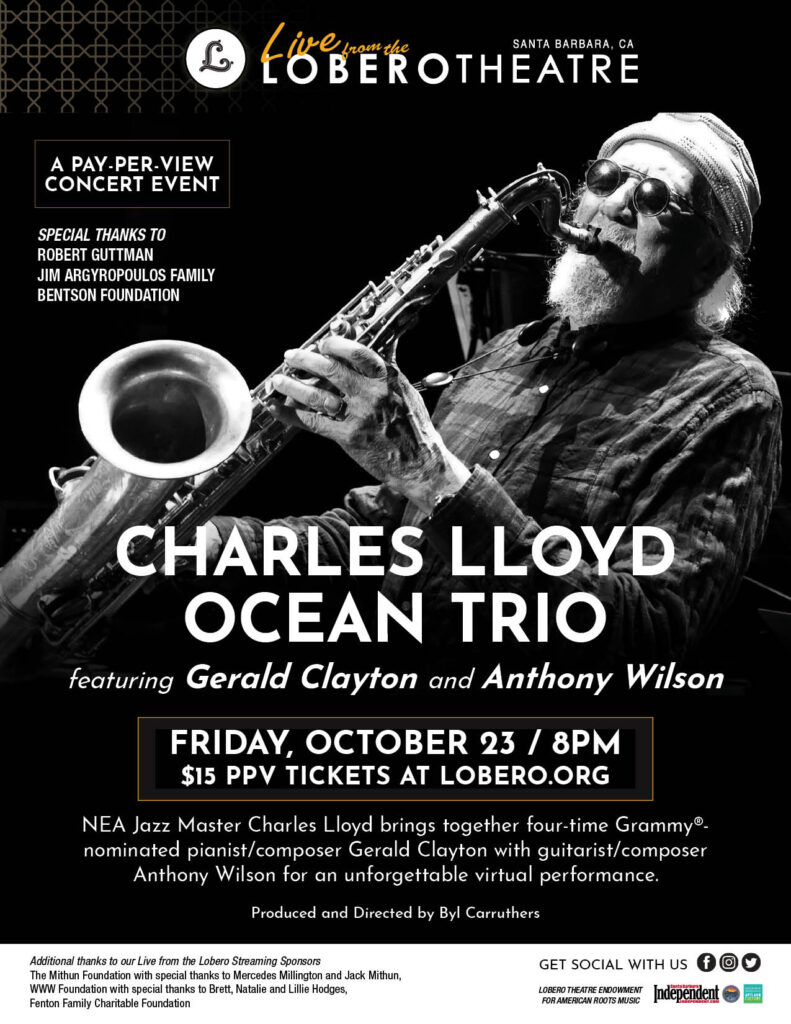 Afro Latin Jazz Alliance Presents Notes 4 Votes: The Afro Latin Jazz Alliance (ALJA) is presenting a “get out the vote” initiative, Notes 4 Votes, on October 25. The event will be emceed by Arturo O’Farrill, Larry Blumenfeld, and Tracy Hyter-Suffern. The one-time gathering will be live-streamed via ALJA’s Facebook page, and spotlight speeches and performances by preeminent guests, including Terence Blanchard, Vijay Iyer, Carla Bley, Dr. Cornel West and more. 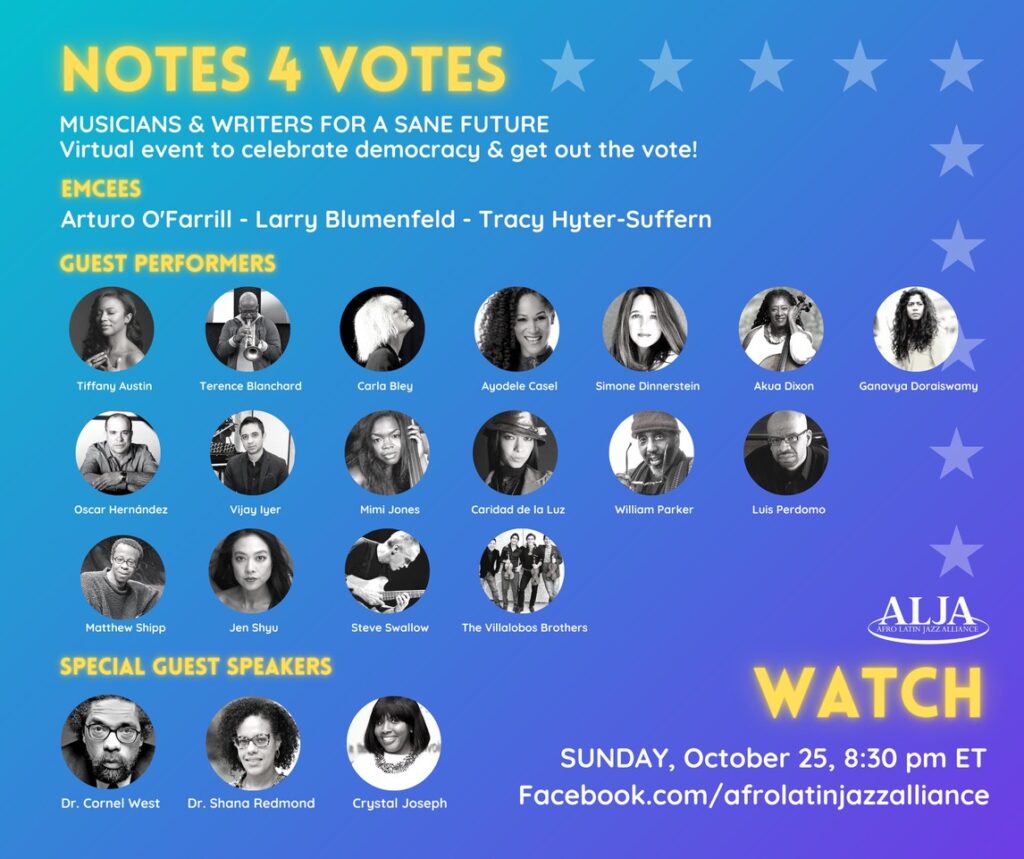 Pinecrest Gardens Announces All-Star Online Jazz Series: Pinecrest Gardens will respond to the cancelation of its jazz series due to the pandemic with an eight-show online concert series, titled JazzAid Live from the Banyan Bowl. The series kicks off on October 17 with a performance by Jon Secada and the following shows will include Dee Dee Bridgewater, Kurt Elling, The Manhattan Transfer and more. A generous percentage of the proceeds from the COVID-19 relief fundraiser will go directly to World Central Kitchen. 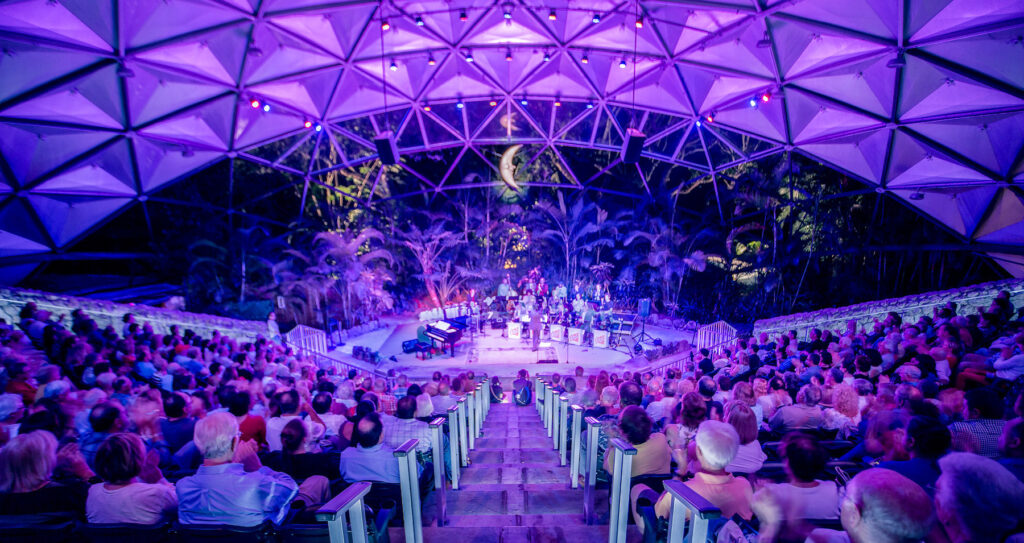 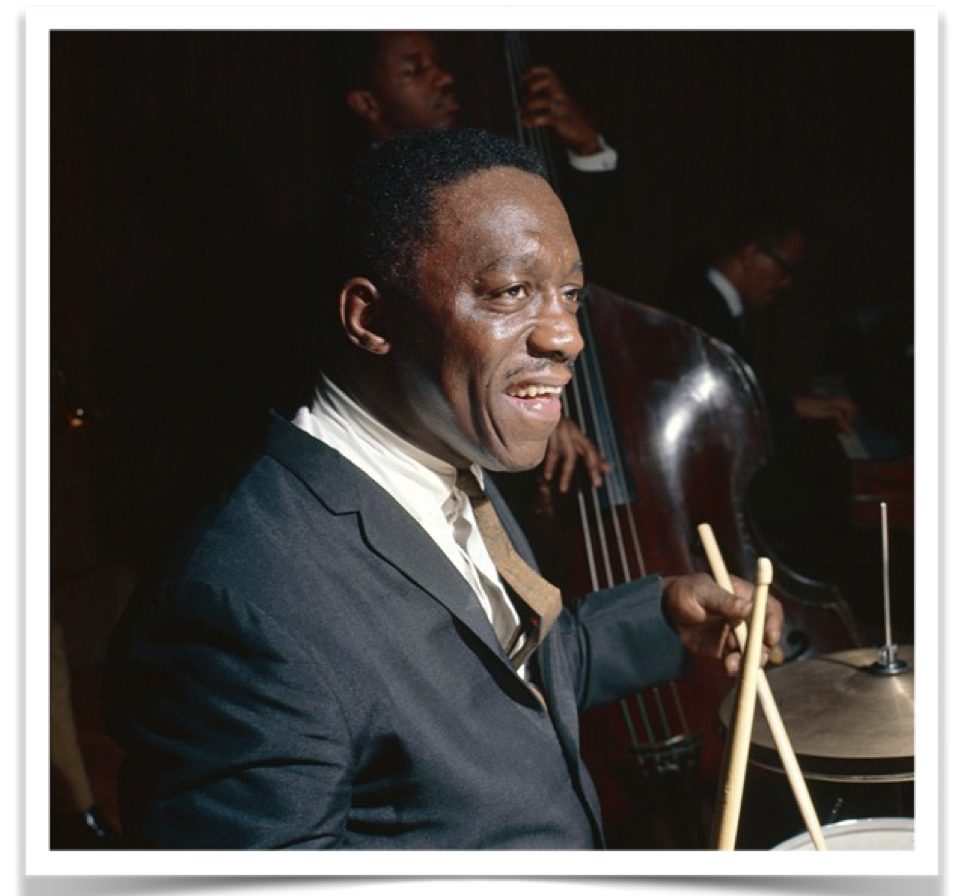 Paul Winter’s Light of the Sun is his first record where he appears as a featured soloist throughout, showcasing his signature sax voice. The album is conceptually designed as a celebration of light and the many meanings we attribute to it. “Music,” he explains, “is the common medium that can embody both the spiritual and physical aspects of light.”

Without Dimensions is Hungarian vocalist Júlia Karosi’s genre-melding project and her fourth album as a leader. Known for synthesizing jazz and classical sensibilities, here she explores the works and concepts of Bartók and Karósi, in collaboration with guitarist Ben Monder, within a contemporary jazz setting.

Trumpeter/composer Nate Wooley engages with 14 artists of varied and mingling musical lineages on the sixth edition of his eclectic series, Seven Storey Mountain. The confrontation led to new compositions, performed with a large ensemble and choir, which premiered in November 2019 at Saint Peter’s Episcopal Church in Manhattan and was recorded the following afternoon. 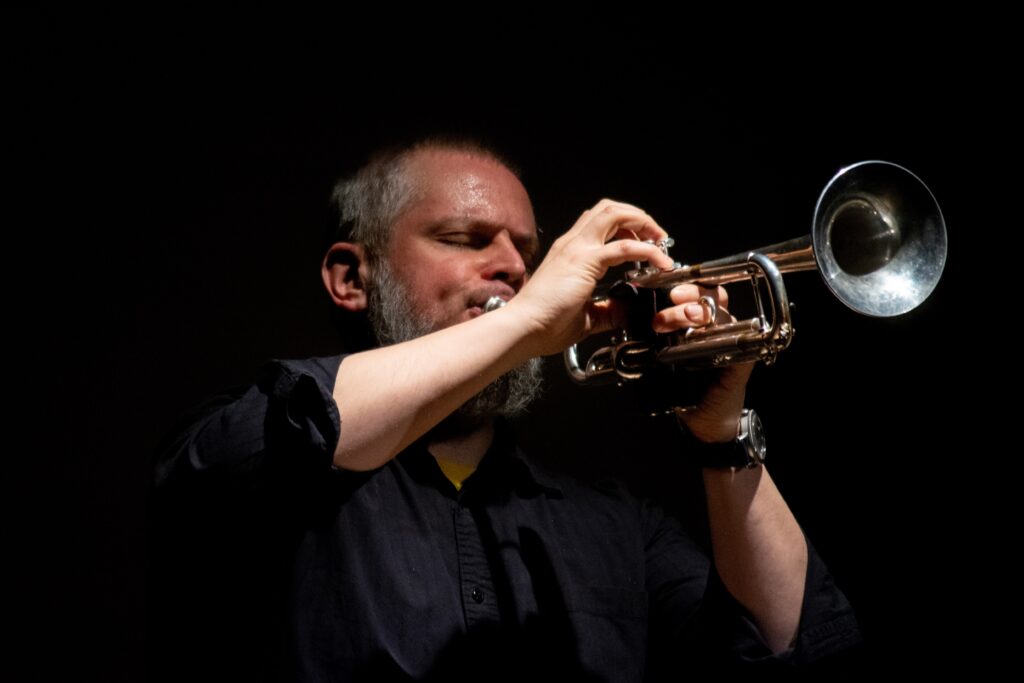