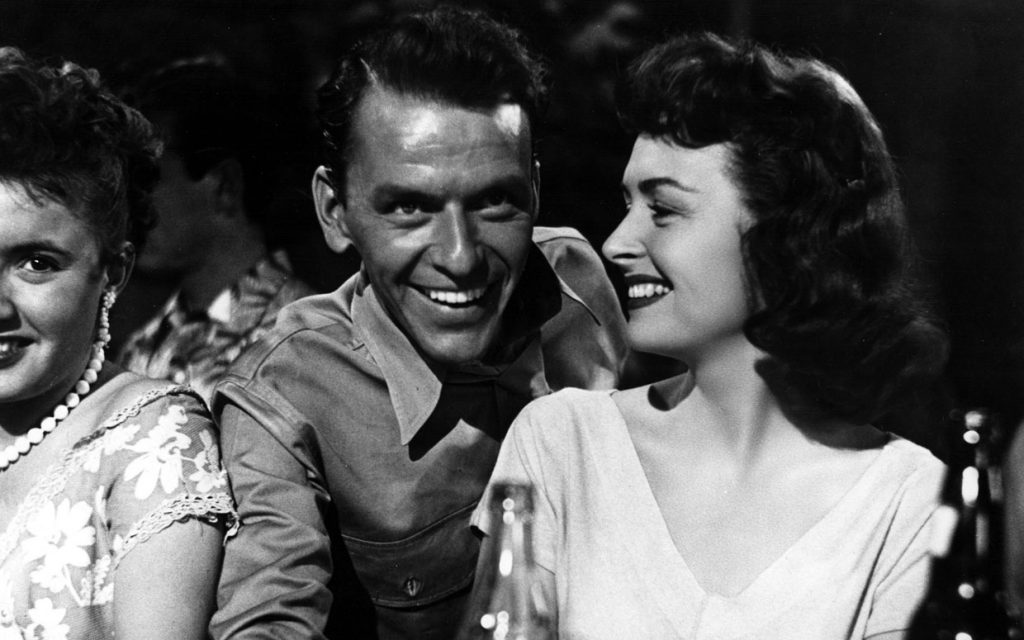 On top of being a celebrated vocalist, Frank Sinatra found praise for his many cinematic roles, which spanned from musical comedies to dramatic features. The most significant of these, however, was his supporting turn in the 1953 film From Here to Eternity, which is arguably discussed more for his turn in the film than anything else, despite being a top quality film from the Golden Age of the Hollywood Studio System.

Directed by Fred Zinnemann, From Here to Eternity film follows the tribulations of three soldiers played by Burt Lancaster, Montgomery Clift and Frank Sinatra stationed on Hawaii in the months before the infamous attack on Pearl Harbour and their intricate romantic predicaments. It was based on a best-selling novel of the same name by James Jones, loosely based on Jones’ experiences in the pre-World War II Hawaiian Division’s 27th Infantry and the unit in which he served and was named one of the 100 Best Novels of the 20th century by the Modern Library Board.

In this film, Sinatra plays the third lead. He is Maggio, the wisecracking best friend of Private Prew, a loner who lives by his own code of ethics and communicates more with his bugle than he does with words. Throughout the film, he is targeted for persecution by a sadistic stockade sergeant, Fatso Judson played by Ernest Borgnine, whose bullying progressively and quite painfully drives Maggio to the ground.

By the early fifties, Sinatramania that had seen his rise to superstardom had faded out, and his career was floundering. He eventually found himself without a recording or a film contract. In order to be cast in From Here to Eternity, he was forced to bite the bullet and chew it, accepting $8,000, which was a tiny fraction for what he had made in his previous cinematic musical outings such as On the Town and Anchors Aweigh in the forties. On top of that, in Zinnemann’s film, he was relegated to a supporting role.

There is a famous rumour that accompanies the casting choice of Sinatra for the role of Maggio. It was encouraged by the passage in Mario Puzo’s novel The Godfather, in which a producer’s mind about a casting choice is made up for him when the mafia have him waking up with the severed head of his favourite horse in his bed beside him, blood trickling in the morning sun. The rumour has been ridiculed by Zinnemann himself, who said “the legend about a horse’s head having been cut off is pure invention, a poetic license on the part of Mario Puzo who wrote The Godfather.”

A more plausible explanation for the casting of the music personality in a dramatic role is offered by Kitty Kelley in her Sinatra biography. She says that it was actress Ava Gardner, Sinatra’s wife at the time, who persuaded producer Harry Cohn’s wife to use her influence with him.

Despite the film being a watered down version of the much grittier and racy novel upon which it is based, From Here to Eternity was released in 1953 and proved to be very successful with critics and audiences alike. Sinatra too received much praise for his role, which earned him an Academy Award for Best Supporting Actor. In retrospect, one can see that his character Maggio is not as interesting or as enigmatic as the ones played by Clift or Lancaster. But what endeared him to the public’s eye is arguably one thing in particular – for the first time, the film required him to play the role of the victim, which differentiated the cocky and over-confident crooner’s image, softening it up and humanizing it to a level that would revive his career and status in the entertainment industry for the rest of his career as an acclaimed entertainer.

It was also a much darker role than his previous ones. From then on, he would gain confidence in his leading dramatic roles. For instance, his sneering disdain as the villain in Suddenly, an assassination thriller made the following year, received no Oscar recognition, but takes the kind of risks that From Here to Eternity never demands of him. But perhaps his greatest actng achievement came in 1955, when he played the lead in The Man with the Golden Arm by Nelson Algren, in which he plays a drummer and drug addict who gets clean while in prison, but struggles to stay that way in the outside world.

Following the success of From Here to Eternity, Sinatra once again became a requested music artist. On March 13, 1953, Sinatra met with Capitol Records vice president Alan Livingston and signed a seven-year recording contract. He started recording in April, where his collaboration with established arranger and conductor Nelson Riddle began. After recording the first song I’ve Got the World on a String, he could not contain his enthusiasm, and after listening to the playback, he reportedly exclaimed “I’m back, baby, I’m back!”.