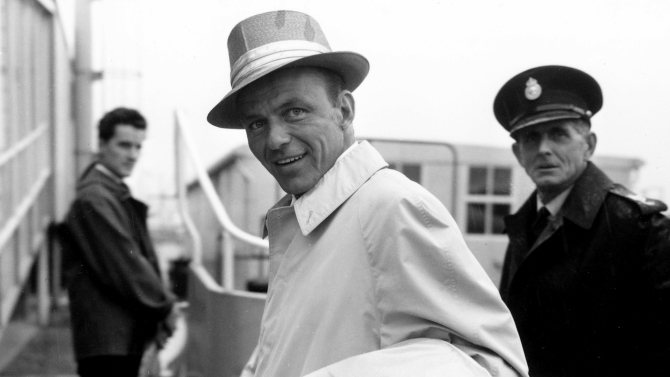 Sinatra was viewed as a role model by the Italian-American community and beloved by audiences in Italy.

Roughly five million Italians emigrated to America from 1880 and the beginning of the First World War. Among them were his father Anthony Sinatra, who came from the small Sicilian village of Palagonia, and mother Natalina Garaventa, more commonly known by her middle name Dolly, who came from Genoa. This was a community of over five-million people who remained starved for role models until Frank Sinatra’s rise to stardom.

Non had an impact quite like him before, and even some of his contemporaries didn’t quite fit the bill. Rudolph Valentino was one of the first silver screen idols, but was more closely identified with the exotic characters he portrayed, such as the Sheik, than his Italian background. Even worse, in his private life, he was often ridiculed by more conservative and traditionalist audiences, labelled with the demeaning and ignorant monicker of “pink powder puff”.

Joe Di Maggio is easily one of the biggest baseball stars even, and was particularly huge during his tenure in the fifties with the New York Yankees, but it was hard for ordinary people to warm up to him due to his affiliation with the Hollywood glamorous lifestyle and his very private nature that made him even more unreachable.

Following the trend of the time, Harry Warren, the composer of such great and popular hits as I Only Have Eyes For You, Jeepers Creepers and what could be considered the unofficial Italian American anthem That’s Amore, was born Salvatore Guarenta, but his father had decided to change the family name for fear of discrimination.

On the other hand, Sinatra always wore his Italian heritage proudly. Early on in his creer, he had aptly refused the suggestion from record label owners and producers to change his name to Frankie Satin, in reference to his distinctively smooth vocals. And while the first Italian character he portrayed on screen was Maggio in From Here to Eternity in 1953, Italian Americans were always aware of him as “one of us”. There was something about his overall behaviour that seemed to represent the ethnic American who had made it big due to his enormous talents, who made it to the top of the heap and yet never forgot his roots.

Even in Italy, Sinatra was hugely beloved by Italian audiences. The first time he played a concert there was as a young man approaching his thirties in 1944, and the very first concert was in Rome on June 21 of that year at a show put together for the allied troops, where he was featured in the lineup that included singer Fay McKenzie, dancer Betty Yearton and comic Phil Silvers at what was then called the Foro Mussolini, later renamed Foro Italico. A few nights later he played in Milan at the Teatro Manzoni in Milan with the Bill Miller Sextet.

It took him over forty years to perform live in Italy once again. He arrived to Milan from Madrid with a private jet on September 26,1986 and spent that whole day locked into his room. The following day he was overwhelmed by the ecstatic reception, playing to a sold out arena filled with nine thousand spectators. The concert was even broadcast live on tv, and viewed by another eight million people from the comfort of their home.

He was so overjoyed by the experienced, that he returned to Italy the following year for another round of performances, one of which was in Genoa, the birthplace of his mother, where the little known fact that he was a supporter of the local football team Genoa first came to light.