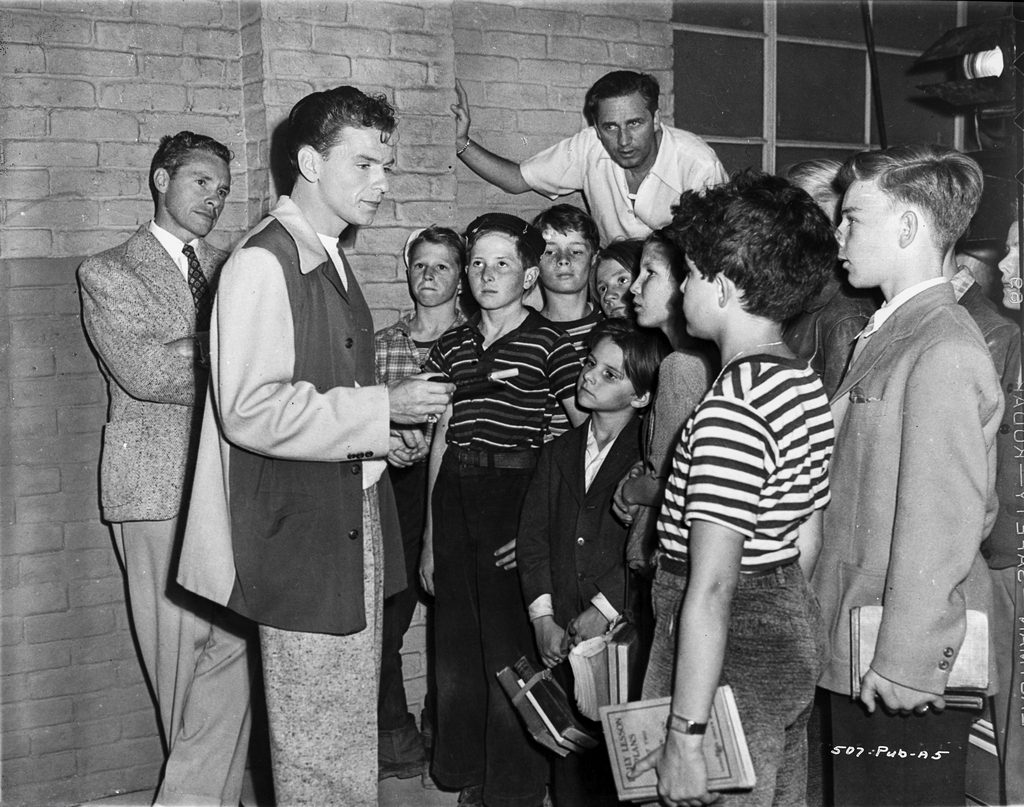 In the forties and fifties, America was in apartheid, and the courts, legislations, laws, churches and institutions converged with the blessing and rationalization to justify it. It is surprising to think that a skinny kid from Jersey, born in 1915, would then go on to champion the rights of all people both publicly and his private life.

An early example of the way in which Frank Sinatra used his popularity to do so, came in 1945, at the start of his road to Sinatramania, when he appeared as himself in a fictional film in which, upon taking a break during a recording session, he witnesses a scene on the street in which he sees ten boys chase down a Jewish kid. He intervenes, and through dialogue first and then a short speech, tells them that all Americans are equal, regardless of race or religious creed. The film was called The House I Live in and went on to win a special Academy Award and Golden Globe the following year.

Throughout his career, Sinatra insisted on having integrated backing orchestras. He helped open many doors by collaborating and became great friends with almost every black idol of jazz, blues and swing, such as Billie Holiday, Ella Fitzgerald, Nat King Cole, Duke Ellington and many others. He recorded two records with Count Basie in the sixties on Reprise, and quoted him musically and lyrically in his fifties works at Capitol Records – in his version of Come Dance With Me, for instance, a notable reference can be seen in the line “hey there, Cutes, put on your Basie boots and come dance with me!”

During this time, black musicians also experienced embarrassing dispairities. For instance, those who performer in Las Vegas and were not allowed to stay on the Strip and, and were relegated to much less glamorous arrangements downtown. Lena Horne was an exception, perhaps because she was a favourite of big time mobsters, including Bugsy Siegel. Staying at the Flamingo, room service would be instructed to burn the sheets as soon as she checked out she checked out.

Sinatra once escorted her to the ultra-swanky Stork Club, and when he was told she could not be admitted, he threatened to leave and create a public stink in the media if she was not welcomed.

He simply downright refused to play at any club that did not admit audience members of any race. One of the only reported incidents in which he marred his record came in 1981, when he played in Sun City, South Africa, despite an organized boycott to protest the country’s policy of apartheid.

The initial members of The Summit, or more commonly known by the press as The Rat Pack, were Frank Sinatra, Dean Martin, Sammy Davis Jr., Joey Bishop and Peter Lawford. Each represented a different segment of America, and appeared together on stage, in films and on records countless of times. With the inclusion of Davis, who had been a headline vaudeville act for many years, in his close circle of friends he automatically made a statement on what America should look like in the sixties and beyond.

Frank Sinatra was a generous financial supporter of Martin Luther King. He was always willing to headline fundraisers and help the Civil Rights Movement in any way that he could. He received a lifetime award from the NAACP. During the turbulent sixties, Rev. Martin Luther King Jr. recruited Frank Sinatra to join the Civil rights marches in the South.

His stance upon the racial issues can be summed up in a few lines from the July 1958 edition of Ebony Magazine, which featured an essay by Sinatra on race. “A friend to me has no race, no class and belongs to no minority. My friendships are formed out of affection, mutual respect and a feeling of having something in common. These are eternal values that cannot be classified,” he wrote. “We’ve got a hell of a long way to go in this racial situation. As long as most white men think of a Negro first and a man second, we’re in trouble. I don’t know why we can’t grow up.”