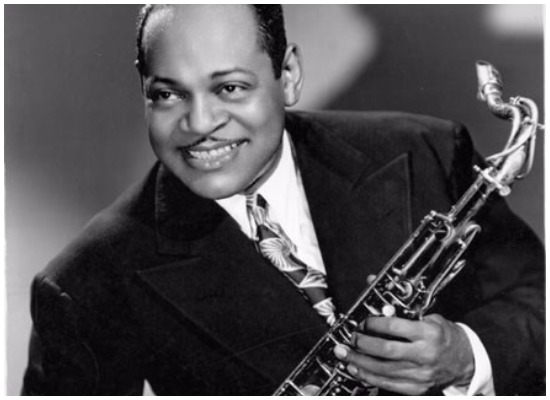 “Disorder at the Border” was written by saxophonist Coleman Hawkins and first recorded for Apollo in 1944. Hawkins had been active for over twenty years and was one of the first pre-bop monarchs to embrace the new jazz style and facilitate the transition from swing to bebop. He hired the youngest and most talented players on the scene, such as trumpeter Dizzy Gillespie and drummer Max Roach. Both were part of Hawkins’ orchestra which, in February 1944, recorded a number of tracks that have been referred to as being among the first ever bebop recordings. “Disorder at the Border” is one of the most forward-thinking tracks from these sessions, which also premiered Gillespie’s “Woody ‘N You” and Budd Johnson’s “Bu-Dee-Daht.” Brian Priestley has also said that “Disorder at the Border,” “in a very real sense … encapsulates the sources of both bebop and rhythm-and-blues, and of the ultimate conflict between them.”

The new sounds took some time to get used to, and not all reviews were favorable. For instance, a Billboard review from the time reads: “There is more confusion than cohesion in the playing and even the Hawk is not at his best at all times.” In retrospect, Henry Martin and Keith Waters have also argued that here, “bebop had an embryonic sound: the ponderous big band, the rhythm section, and many of the solos still seemed weighted down by the conventions of swing.” Furthermore, it has been said that the more daring improvisations on “Disorder at the Border” came from Gillespie, while Hawkins still appears in the process of branching off into new territory. Yet, it is important to note that “Disorder at the Border” benefitted from a Gillespie arrangement, which was itself influenced by the riffs and style of saxophonist Charlie Parker.

Although “Disorder at the Border” never reached jazz standard status, it is still an important, landmark track from a time of experimentation and transition in jazz. Despite it lacking the popularity of many tracks from the time, it has been covered by a number of artists, including trumpeter Sonny Dunham and his orchestra in 1977, and saxophonist Cecil Payne and trombonist Curtis Filler in 1979. Three years after its birth, saxophonists Dexter Gordon and Wardell Gray played “Disorder on the Border” on the road and a lengthy live take recorded in 1947 was included in The Hunt, released in 1977. More recently, it was listed as the closing track of Zootcase, the album by Alan Barnes and Scott Hamilton with the David Newton Trio featuring Matt Miles and Steve Brown.

Song of the Day: Charlie Parker, “Scrapple from the Apple”