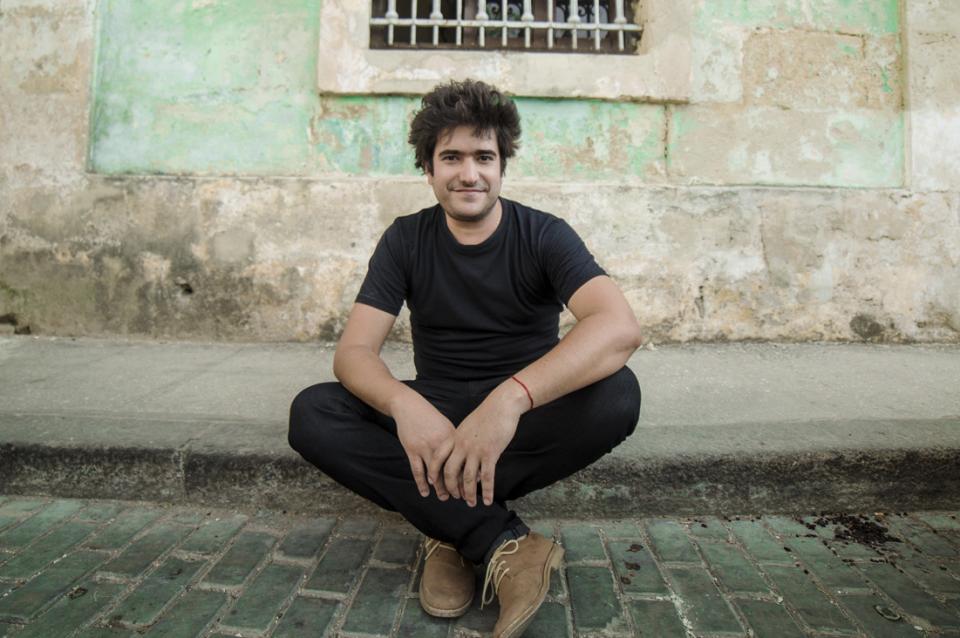 Cuban pianist Harold Lopez-Nussa descends from two strong lineages, both of which inform his playing and shape his sound.

One is familial: His father, Ruy Lopez-Nussa, is one of Cuba’s most respected percussionists, and his mother is an esteemed piano teacher. His uncle, Ernan Lopez-Nussa, is a keyboardist and recording artist in their home country, and his brother Ruy Adrian is a drummer on the rise. (He’s also an admirable piano player. Watch the brothers play a four-handed duet here.)

The other lineage is cultural: Lopez-Nussa was trained in accordance with his country’s long tradition of classical music. He began piano lessons at eight years old, first at the Manuel Saumell Elementary School of Music, and later at the Instituto Superior de Artes, where he graduated with a degree in classical music, winning several awards along the way.

From the intersection of these two paths, however, Lopez-Nussa decided to forge his own route. Because for as long as he can remember, he’s been obsessed with jazz. A self-taught improviser, he describes having to learn the language of jazz in the gaps between his classical training. It was a challenge, he says, but a challenge he wholeheartedly embraced. “I fell in love with it,” he said during a phone interview with JAZZIZ. “It became my life.”

And it’s within the jazz idiom that Lopez-Nussa’s career is flowering. He’s a profoundly deep and immeasurably skilled player, and though he’ll be the last to admit it – “I don’t consider myself a jazz musician,” he told JAZZIZ – he ranks easily among today’s top jazz pianists. Only 35 years old, he’s already recorded seven albums as a leader, including 2016’s phenomenal El Viaje and 2013’s New Day.

His latest project is the trio album Un Dia Cualquiera, released June 15 on Mack Avenue Records and featuring his brother Ruy on drums and longtime friend Gaston Joya on bass. The album binds the branches of his musical pedigree together — incorporating elements of classical music, Cuban folk, Yoruban ceremonial music and jazz — while at the same time advancing Lopez-Nussa’s highly personalized aesthetic.

Lopez-Nussa is currently on a European tour in support of the new album. (He’ll be in the United States for the remainder of the summer, including a performance at the Rockport Jazz Festival on August 4.) JAZZIZ spoke to him over the phone from Paris, where he and his trio were scheduled to perform at the vaunted jazz club Sunset Sunside. In the interview, Lopez-Nussa discusses the new album, his experience with jazz music in Cuba, the impact of Yoruba on his playing and his continuing evolution as a  musician.

Un Dia Cualquiera means “just another day” in Spanish. What is the significance of that title?

It’s just the three of us doing what we do every day. Just another day of our lives, where we share music and try to put some ideas together. We have some fights sometimes (laughs), but we wanted to just show us being ourselves together, playing together just like any other day.

The album features a new trio with your brother Ruy and your good friend Gaston. Bandmates don’t get much closer than that.

Yeah, I went to school with Gaston. I’m a little bit older than he is, but he was in the same class with my brother at university and we’ve known each other for a long, long time. We were playing together in Cuba very often, but this is the first time that we are touring as a trio. And this is our first album as a trio, so this is quite special for me.

The album has great energy. Where did that come from?

You were trained as a classical pianist. How about your bandmates? Do they have classical training?

Yes, that’s the same for all three of us. In Cuba, what you learn in school is classical music. So I was trained in classical piano. Gaston was playing classical bass. My brother was trained in classical percussion, like marimba, xylophone, those kinds of things. At the same time we were in school, we were trying to play some jazz together, but we really didn’t know how. So we were sharing knowledge, we were sharing music, sharing lessons about background and harmony. And not just with those guys, but with my other friends, too. That’s how we learned to play jazz.

What about the native music of Cuba? Was that taught in schools?

We didn’t study any Cuban music in school. Well, we studied a little bit of the classical Cuban composers – like Ignacio Cervantes, Manuel Saumell, Ernesto Lecuona – those guys. But you don’t learn how to play cha-cha-cha or son. The percussionists might have a class on folkloric music or a course on congas, but nothing for piano or bass players.

But the folk music of Cuba sounds like a major influence on your music. Where’d you pick it up?

Well, I was born in Centro Habana, which was one of the popular neighborhoods for Yoruba [religious ceremonies] in Havana. Every week we had three or four ceremonies of Yoruba. I wasn’t into this religion – I’m not a religious person – but even if you are not into the religion, you hear the music. I also had a lot of friends who practiced this religion, and I was able to go with them to many, many ceremonies. It’s something very special. When you’re in a Yoruba ceremony you feel something very powerful.

Is it still the case that musical schools in Cuba aren’t teaching jazz or traditional folk music?

Yes, it’s still like that. That’s just the way it’s built. The problem is that, when you’re a teacher in Cuba, you don’t really get paid anything. So good musicians don’t want to teach in Cuba. It’s a really difficult thing.

What was your exposure to American jazz in Cuba?

Well, my family was very musical. My uncle is Ernan Lopez-Nussa, a famous jazz piano player in Cuba. He taught me my first chords in the left hand. Then, you know, trying to listen to the CDs that we were able to get in Cuba, trying to play solos from Bill Evans, Herbie Hancock, Chick Corea. And then just sharing things with my friends, really. Asking them, “Hey, have you heard this solo from Herbie Hancock?” And we would try to transcribe the solo together, trying to teach each other things. “How would Herbie voice this B minor 7 chord?” We had to figure these things out on our own.

But I remember this as a very unique moment in my life. It was very joyful. Trying to get into this music that was so far away from my background in classical. I fell in love with it. It became my life. I was all about it. I don’t know if you’d call what we’re doing now “jazz,” but I’m in love with improvisation. I get to feel this excitement every night that’s always different. Not knowing what’s going to happen – that’s exciting for me still.

Was making the leap from classical to jazz a challenge for you?

It was very, very hard for me. I’m coming from this framework where you have to play exactly the score that you learn. And then when I was trying to play my first jazz song – I think it was “Autumn Leaves” – I learned the song and when somebody told me I had to improvise I was like, “What? What is that?” I didn’t know how to do it. I was scared.

You mentioned Bill Evans and Herbie Hancock, but one of the tracks on your new album is dedicated to Bebo Valdes. What influence did he have on your playing?

Well, I don’t know if he has a big influence or not on my playing, but he’s someone who really affected me when I heard him. Any time I listened to Bebo’s music, I feel something very strong. He has this kind of feeling that moves me. So when we were trying to put the song “Un Matin Cualquiera in Paris” together, something reminded me of Bebo’s playing. I was trying to dedicate it to him, his way of playing, his way of transmitting the feeling. It’s one of the most important things for me, that ability to touch people with your art.

So it’s more about mood or emotion than about actual musical influence.

You’re traveling a lot behind this new record. Has the exposure to the cultures of other countries opened your eyes to any new musical styles? Any styles you may want to tackle in future records?

Yeah, that’s been wonderful. It’s a gift to be able to do this. I was listening two nights ago to two wonderful musicians at a festival in the south of France, one who played the accordion, one who played guitar. They were doing a duet. And I was just falling in love with those guys. And this all thanks to my travels. I was thinking after their concert to maybe even collaborate with one of those guys! I’m glad to have these kinds of opportunities, to travel, to listen, to meet new musicians and cultures. It’s something that probably wouldn’t have happened to me had I decided to just play at home!

Speaking of recordings, do you have any urge to record in other styles? Straight-ahead jazz? Classical?

Well, I can see myself recording a classical album before I try my hand at a straight-ahead jazz album. I have too much to learn about jazz (laughs). But who knows!

You’ll be in the United States next month, playing at the Rockport Jazz Festival on August 4. Have you played that festival before?

Learn more about Harold Lopez-Nussa’s performance at the Rockport Jazz Festival by visiting the fest’s website.

For more information on Nussa’s albums and upcoming projects, visit him online.