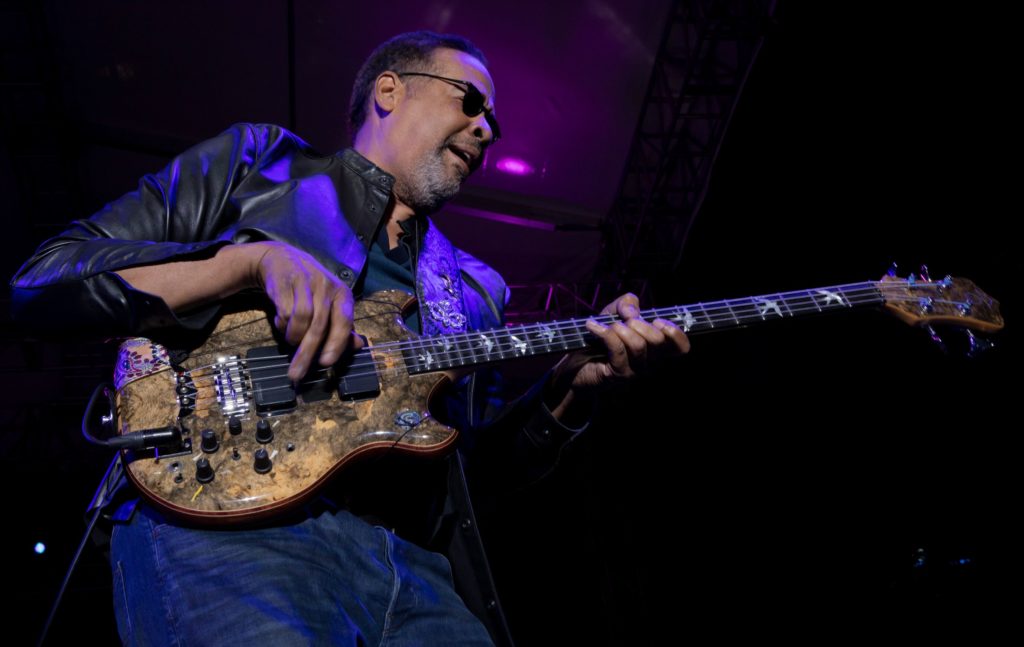 Stanley Clarke performs at the 2019 Detroit Jazz Festival, which ran from Aug. 30 to Sept. 2 in the Motor City. ((Photo: Takehiko Tokiwa)

Bass legend Stanley Clarke had been scheduled to headline the Detroit Jazz Festival for the past two years. But as fate would have it, the sets were canceled because of inclement weather, leading many loyal festival-goers to believe that, when it came to weather in the Motor City, Clarke was hexed.

Well, the organizers of the four-day festival don’t believe in hexes, because they gave Clarke another shot, booking the Grammy-winning bassist as the festival’s artist-in-residence for its 2019 edition, which took place Aug. 30-Sept. 2 in Detroit’s downtown Hartt Plaza. Lucky for all in attendance, the hex was lifted. The weather for Clarke’s opening night performance was as perfect as his set of jazz fusion.

Leading up to that point, the night started with a terrific concert from pianist Danilo Pérez’s Global Big Band, featuring Luciana Souza and Miguel Zenón. Adding to the musical heft of the performance were the Detroit Jazz Festival Orchestra and a string quartet. Together, this ensemble served up a delicious set of original global jazz music, which got the crowd sufficiently hyped for Clarke’s set. Clarke went into the basement of his discography, returning with classics such as “School Days,” and ”I Wanna Play for You.”

The festival was rich in other such memorable concerts. This year marked the event’s 40th anniversary, which meant that a number of the festival’s most popular headliners — including Terence Blanchard, Ron Carter, and Sheila Jordan — made triumphant returns.

At 90, Jordan sounded as inviting as she did on her debut album. She delivered a stick-to-your-ribs set along with bassist Ron Carter and guitarist Pat Metheny. They were so in sync during their duet that it appeared it was one musician playing the guitar and bass.

Ron Carter’s performance with his quartet was a master class in artistic splendor. Carter reworked classics from his songbook, stitching the tunes together where it appeared to be one beautiful suite.

Saxophonist Kenny Garrett blew the sun out the sky during his set, and those who attended Clarke’s second concert witnessed his acoustic bop side. He cast the zoom lens on the teenage saxophonist Emilio Modeste, who swung with the knowhow and maturity of a jazz veteran.

Other bands made sizeable impressions. The Tottori Jazz Sand Dune Band, from Japan, offered up a phenomenal set, charging through bop, swing and the blues and ending their set with a funk number. Trumpeter Aya Takazawa was the band’s ace, blowing as if the spirit of Clifford Brown and Lee Morgan possessed her horn. Pianist Connie Han set also left a mark.

But back to Clarke. He was supposed to close the festival. It rained, and sets were being canceled. But not Clarke’s. Despite the downpour, the bassist played on.