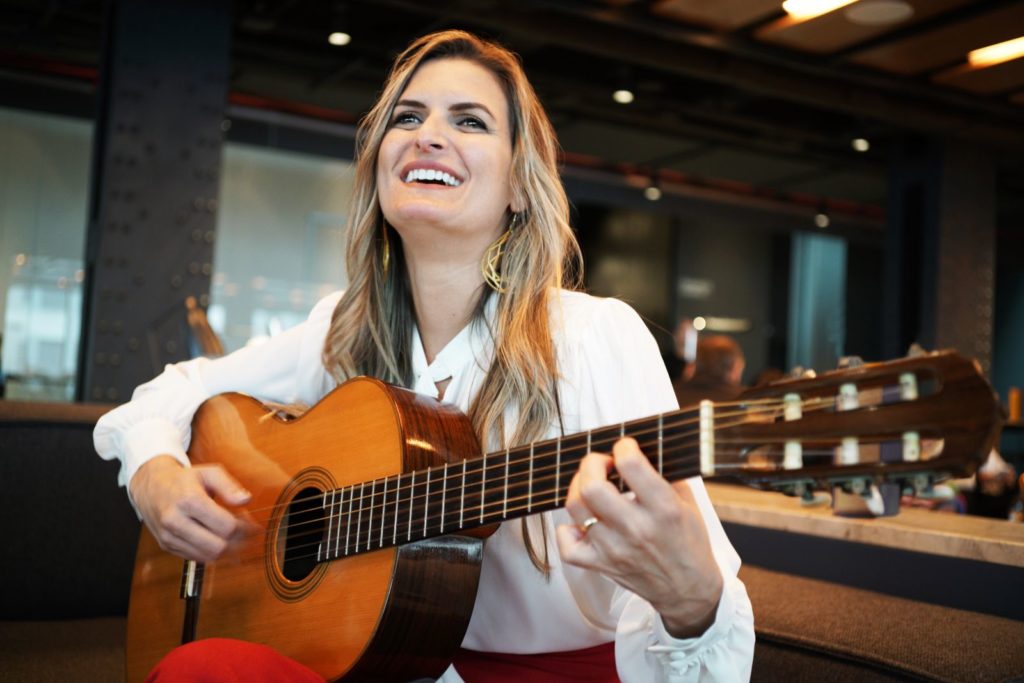 Following in her father’s and grandfather’s footsteps, vocalist Daniela Soledade is making her mark on the Brazilian jazz world. Her debut album, A Moment of You (Blue Line Music), reveals her easy command of the idiom, as she interprets bossa nova classics, puts a Brazilian tinge on jazz standards and honors her lineage by including compositions by her dad and granddad, guitarists who worked with a who’s who of Brazilian musicians. In fact, “Song for Baden” was written by Soledade’s father, Paulinho, in tribute to his friend and mentor Baden Powell, and he plays behind his daughter on the track.

The singer evinces the quiet, intimate style of João Gilberto as she caresses the lyric — in English and Portuguese — with apparent affection, her voice riding the rising and falling guitar accompaniment and subtle percussion. Guitarist Nate Najar, who also plays on the album, produced the session, and his and Soledade’s sensibilities could hardly be more simpatico.

We recently spoke with Soledade about the making of the album, her extraordinary pedigree in Brazilian music and the influence of the recently departed Gilberto. Below is an excerpt of the conversation that has been edited for length and clarity.

You come from a long line of Brazilian musicians. Tell me what your life was like growing up.

Growing up as a kid, my dad always had a home studio. I basically grew up in that studio. I was always listening to his projects, and as I got older, he started bringing me around recording studios in Rio. At first, it would just be to watch him work, and later, he started getting me to work in TV shows and commercials and things that needed a kid’s voice.

When I was 13, I went to the conservatory of music and picked up the flute. It was at the Villa-Lobos School of Music in downtown Rio. I did all kinds of music lessons. I was highly influenced by Pixinguinha. He played a musical genre called choro. So I played that kind of music and just general Brazilian music. I sang at the conservatory, too. I started playing the guitar almost right after that, because I could sing and play guitar. Of course, my dad showed me things, because he was a great guitarist.

What was his stature in the Brazilian music community?

Your new album has a few jazz standards on it. You’ve obviously got the chops for Brazilian music, but what was your first exposure to jazz?

Well, bossa nova is samba with the influence of jazz. That’s really what bossa nova is. It has a lot of jazz components in it naturally, so I always had an ear for the kinds of things people like Billie Holiday and Ella Fitzgerald and Sarah Vaughan were doing. But when I moved to the States, I was exposed to more contemporary artists who did the Brazilian thing but were a little more jazz-centric, people like Diana Krall, Stacey Kent, Eliane Elias. They were definitely inspiring.

What was the process of putting your first album together?

Well, I’ve always wanted to record my own album. I was introduced to Nate Najar last year, and when we first met, we immediately figured out that we both loved bossa nova. Pretty quickly, Nate came up with the idea of recording an album. He has recorded Brazilian jazz albums before, but instrumental. He plays multiple instruments, and he really masterminded the whole thing. We recorded in Largo, Florida, near Tampa. We went to New York for some songs so that we could get Duduka Da Fonseca on drums.

What was it about Nate’s playing that was such a perfect match for you?

Nate’s playing is amazing. He’s fantastic. I listen to him play and I think he’s Brazilian. He loves the same aesthetic I love. He just has a clean, immaculate way of playing the guitar. He cares about every note and every detail. I couldn’t ask to be working with a better guitarist for this genre.

How did you and Nate decide on repertoire?

There were a few components for picking the songs for this album. Nate and I picked them together. First and foremost, we wanted to avoid some of the obvious choices, because we wanted to bring out some gems that are not recorded.  So “Dunas” is a perfect example. It’s such a gorgeous melody but you hardly ever hear it anywhere.

And there’s the song that my grandfather composed with Jobim that maybe has been recorded once ever. The other thing we did that was really special was that we put one of my grandfather’s songs, one of my father’s songs and one of my songs. In fact, on my dad’s song, we sent the recording down to Rio, and he played the guitar on it. He’s playing the guitar on the “Song for Baden.” (Stream the song via the player below.)

You also cover Great American Songbook tunes like “I Wish You Love.” What made that song stand out to you?

It was really just the aesthetic. Bossa nova isn’t just about the beautiful harmony and richness, but also the themes of love and of nature and all the beautiful things in the world. “I Wish You Love” has all the right ingredients: The harmony and melody are gorgeous, and the theme is about love. It all fit together.

Where did the album title, A Moment of You, come from?

Well, that lyric was part of the “Someone To Light Up My Life” song that Antônio Carlos Jobim wrote for the Orfeu da Conceição play, which became the movie Black Orpheus. The play itself was written by Vinicius De Moraes, and while he was writing it, he needed somebody to compose the music. My grandparents knew Vinicius, and my grandmother was actually the choreographer for the play. Well, when Vinicius asked them for a recommendation, they said, “We know this young composer named Antônio Carlos Jobim.” And that’s pretty crazy, because if you think about everything Antônio Carlos Jobim did, it all goes back to this play.

We recently lost one of the great Brazilian composers of all time in João Gilberto. What kind of influence did he have on your work? On your family’s work?

I don’t recall my grandfather composing anything for Joao Gilberto, but he was a part of my grandfather’s inner circle. He was a great influence, because he was a big influence on Jobim. But my grandfather had a nightclub in Rio called Zum Zum. All of the first bossa nova shows were played. I wonder if João Gilberto played there ….