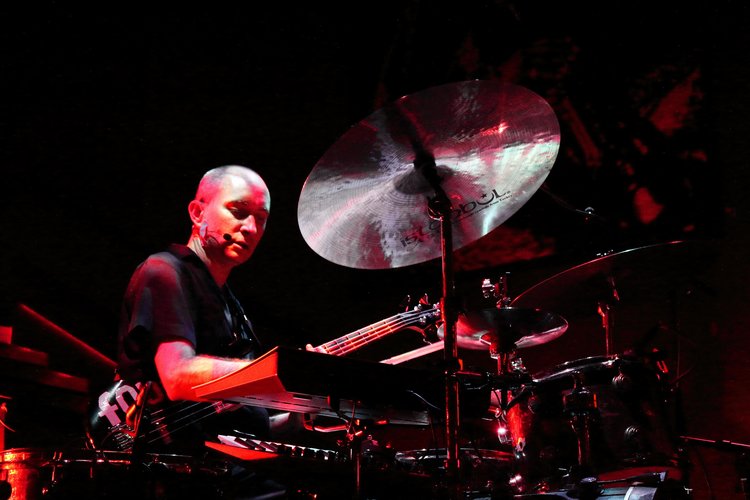 Throughout his career, acclaimed multi-instrumentalist Nate Wood has performed or recorded with such artists as Donny McCaslin, Chaka Khan and Sting, among others. He is also a core member of the GRAMMY Award nominated jazz collective Kneebody. His latest project, fOUR, finds him going solo, playing everything - analog synth, drum, bass and sometimes adding vocals to the mix - at the same time, with no overdubs, click tracks or pre-recorded tracks.

The fOUR project touches upon all aspects of Wood's career - jazz, improv, rock, singer-songwriter - and veers from complex space prog to electronic tinged instrumentals. While it began as a video project, with the multi-instrumentalist posting videos of his fOUR performances on YouTube, Wood released a full-length album of fOUR music, titled X.IT, on July 27. He also hopes to make this his main project, as the process continues to evolve and he prepares to take on more live performance dates in the near future.

Wood spoke to JAZZIZ over the phone about the origins of the fOUR project, the new album, the physical element involved in the process and about partly drawing inspiration for the music from visions of the future and A.I. Below is an excerpt of our conversation, which has been edited for length and clarity.

JAZZIZ: Can you tell us about the origins of the fOUR project?

Nate Wood: I've seen a couple of my drummer friends do projects with multiple instruments, where they take on a lead role. Like Deantoni Parks with Technoself and Josh Dion with Paris Monster, who are using that to get their songs across, as opposed to just backing somebody up. I've been playing drum and bass at the same time, and singing background for people since 2005. I thought, "if I just add a keyboard, I could just make full music by myself." I found the perfect analog synthesizer, the Korg Monologue, that could complement both the drum set and what I was hoping to achieve. I added it to my kit and started experimenting with how I could incorporate it and make music around it. It took about a year or so of trial and error before I found something that worked. I released the "Rabbit" video on February 2017, and that was the first fOUR thing that I released. It was the first thing that kind of worked.

Did you always think of it as a video project as well as an audio project?

Actually, I only thought of it as a video project. But then I thought this kind of music could stand on its own too, and thought it would be cool to release an audio version of it. The physical version of the record is the audio only version of the videos, which are available on YouTube.

That's very true. Over this past year and a half, while making the videos, the record, and practicing to perform it live, I've been trying to minimize the movement and make things economical, like making sure to get the correct height for the keyboard so that my wrists aren't strained, so that I don't have to twist anything. I'm playing a much smaller bass now because it's a lot less heavy on my back and allows me to move my back without putting stress on it. I'm also using a headset mic so that I don't have to have my neck in one place while I'm singing. So, I'm just trying to make it as comfortable as possible.

Do you find the music of this project more personal? Do you think it would be difficult to play it with other musicians?

I don't think so. Prior to this, I made three records on my own where I played all the instruments. They're kind of singer-songwriter stuff, a bit similar to the later songs on the fOUR record but kind of a little more dense harmonically - and of course with a lot of overdubs, so it's richer music. But I performed that music live and I'm not the kind of bandleader who wants everything the way that I did it. I'd rather just hire somebody who I think is amazing and have their own interpretation of the music. I think if I ever were to play fOUR songs with other people, I would be excited to hear what they would do with the music. But right now, playing the music on my own, it's fun. I really enjoy the process of fOUR because it's literally pushing me to the limits of what I can physically and musically do, all at the same time, which also encourages me to get better at playing four instruments simultaneously. I'm also getting better at singing. I'm getting better at playing the bass with one hand. I'm getting a wider knowledge of the keyboard instrument. It's just a very efficient way to get better at music.

What is the theme of this album? What do you impulsively find yourself singing about?

On my other records, the lyrics were all over the place; a lot of made up stories about various people and songs about my relatives, or whatever. This record is mostly about being a little disheartened with the current political climate and also an eye towards the future of where A.I. will go. This future that we're moving into that's uncertain. The music is kind of unsettling at times and since it's electronic, I just feel like the lyrics should kind of fall in line with that a little bit.

Yeah, I'm totally interested. Those have always been my favorite kinds of movies and I've always loved reading about whatever technological advancements were happening with A.I., what people view, how it's going to change our lives and when we're going to see it in our lifetime and all that stuff. I think it's exciting. It's scary, but super exciting too.

There's lots of different musical influences in this album. Would you describe this type of music as genre-defying?

Yes. I'm really not putting any borders or setting parameters on what my writing will be. I just let it happen. And I kind of trust that it'll always sound like it's coming from the same person, from me. But my influences are literally everything. I say to somebody who might not know what it sounds like that if you could combine Aphex Twins and Talking Heads, that would be a good starting point.

Do you find technological developments have made it easier for you to pursue a project like fOUR?

Absolutely. I've always been a do-it-yourself kind of person because I like all aspects of music production. I like the recording aspect, I like mixing, I like taking my time to get things to sound the way I want them to. Obviously, I like playing all the instruments. Thirty years ago, none of this would have been possible. When I made my first record in 2003, it was before computer recording had really come into its own, so I recorded it on a very primitive, early digital hard disk recorder, and it took months and months to mix. Regardless, I got a product I was happy with and I got to do it all by myself. And I didn't have to spend thousands of dollars in studio time paying somebody to record it and mix it and all that stuff.

I feel like every year it just gets exponentially easier and easier. Now, I have a computer that can render these giant video edits that I'm doing in very little time. I recorded this whole record in my apartment, and I have the entire thing wired so the mics and the cameras are always set up. When I have a song ready for recording, I just press go. I have the ability to oversee the whole project from beginning to end. I shoot the video, edit it, and record, mix and master the entire record. The only thing I paid for is the art layout and printing of the physical media. That's very exciting for me.

Despite the technological developments, do you find that physical media is still important?

Yes. The videos are interesting to look at because I'm doing everything at once and because they appeal to all the senses. But then, in terms of the audio thing, I'm old enough to feel that it's not really a record until it comes out as a record and that a record is a milestone. Apparently, a lot of people who have been following the project feel that way too. Also, the sound quality is generally better. Most streaming sites are lossy, so if you get a CD, it's the master that I made. It's not reduced in any way. And of course, vinyl made a huge comeback and so I'm printing vinyl of that as well, which takes forever. But the people love vinyl and I love it too. I just love the sound of it and its physicality.

Are you hoping to take the fOUR project on the road and perform the music in front of people?

It's early days for me. I've already done maybe four or five gigs. I've basically just started and played only in two places. I played at the New Blue in New York City, to basically mostly people who know who I am that are coming to see me play. And they kind of know what to expect. I realized really quickly that it's a project that is going to be influenced by the audience. The only other gig I did was a jam band festival in New Jersey and I was playing for younger kids who were under the influence of something fun... It became kind of a dance party and so I improvised a lot of the time and extended sections and made things more danceable. And it worked really well.

So, there are elements of improvisation in the music.

Yeah, I improvised a couple of full compositions for that concert. The goal eventually with this is to be able to play a dance set and improvise an entire ninety minute of music. This is where my jazz background comes into play. A lot of the work that I'm doing as a sideman is with projects with heavy electronic influences and with a jazz background. It's a lot of improvisation in the jazz form, but using modern, electronic elements to make spontaneous forms that sound like they're compositions. And that's what fOUR is and will become more of - more improvisational based and more flexible and fluid, depending on the situation I'm in.