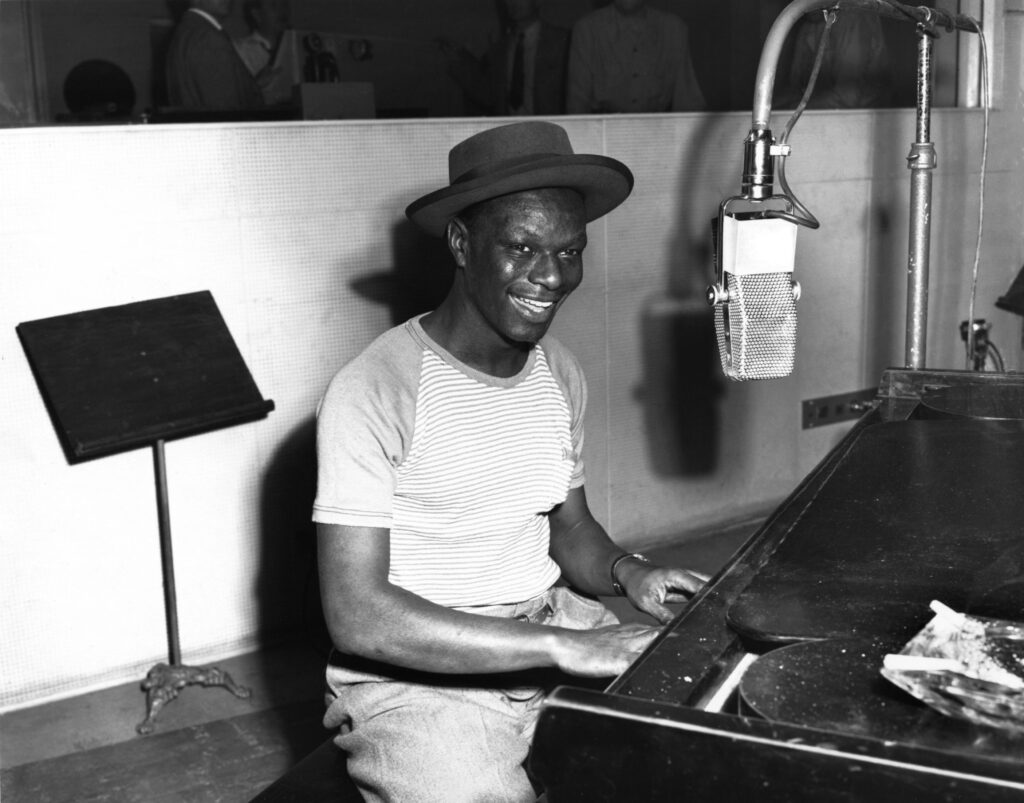 Presently enjoying a renewed spotlight in his centennial year, Cole (1919-1965) seemingly needs no introduction, as a pianist-singer who gloriously married jazz and pop sensibilities and enjoyed both popular and critical success on an epic scale in the ‘50s and ‘60s. The love and lingering influence surrounding Cole’s music is a renewable resource, via lavish and affectionate tributes by such artists at Diana Krall in her early, pre-stardom years, John Pizzarelli throughout his career, and, just last year, through a strikingly luminous Cole tribute album-tour by current jazz male vocalist-of-note Gregory Porter.

But wait, there’s more. Call it the prequel to a legend: the new Christmas-timed box set on the history-conscious Resonance Records, Hittin’ the Ramp: the Early Years (1936-1943), gives us some significant backstory to the Nat Cole saga which many never fully realized or bothered to explore.

True to the best instincts of the Resonance label’s preservation efforts, the seven-disc, 183-track package — fleshed out with extensive liner notes and scholarly research from author Will Friedwald — is one of the revelatory historical releases of 2019. It also helps to support the notion that Cole, much more than a populist jazz crossover sensation, was a pianist-arranger-composer who came to the vocalist role after his initial pianist phase, and who deserves even more artistic recognition than previously acknowledged.

In this case, humble sonic qualities count for something akin to authenticity. The varying degrees of hiss and crackle of tracks, some of which were live-to-disc “transcriptions” from broadcasts during the late 1930s, hardly diminish the mission at hand here: exposing the remarkable versatility and virtuosity of a teenaged and early twentysomething Cole, just before his long, commercially fruitful Capitol Records era, which lasted from late 1943 through the end of his life, in 1965.

Hittin’ the Ramp is the newest major vault-diving and treasure hunt adventure from producer Zev Feldman (working with others). Feldman was behind many a notable Resonance historical project, including admirable packages of unreleased music by Wes Montgomery and Bill Evans. Most famously, last year’s Grammy-winning Eric Dolphy set was a coup which led to Feldman’s hiring as an archivist specialist for Blue Note, in tandem with his work at Resonance.

A timely Christmas-geared release schedule makes this box set a ripe gifting item this shopping season, and with a uniquely diverse appeal–just as his music touched the masses and discerning jazz aficionados (although balking at his proximity to the dreaded “pop sell-out” later in his career). Cole’s musical good spirits have made him a perennial favorite in the yuletide circles, especially given his defining version of “Christmas Song,” and this package includes “Jingle Bells.”

Even that seasonal chestnut emerges afresh, via Cole’s intricate and swingingly syncopated rethink of vocal arrangement, with a fleet guitar solo by Cole’s close musical ally Oscar Moore as a bonus. (Moore’s supremely tasteful and fluid playing on the album is remarkable, making him a secondary star of the collection: he remains a guitarist deserving greater recognition in jazz annals).

Over the course of seven pleasurable hours, the set provides a valuable pre-history of Nat King Cole’s musical pre-Capitol Records trek, starting with the Chicagoan teenager’s work (as pianist, arranger, and composer) with his bassist brother Eddie’s band in 1936, leading to the formation of Nat’s signature format of a drummer-less trio a year later. As a fitting endpiece, shortly before the Capitol era began in late 1943, the package closes with a solid pack of tracks from the 1943 Armed Forces Radio Service (AFRS) recordings, including a seminal take of future hit “Straighten Up and Fly Right,” as finale to this story, and harbinger of the success to come.

In between the box set’s bookends is a densely-packed yet somehow relaxed and engrossing culling of tracks to tell the Cole story’s first chapter. There are early commercial recordings for Decca, including the WWII-geared “Gone with the Draft,” “Honeysuckle Rose” and his later identifying hit “Sweet Loraine,” discourses with Lester Young on themes of “Indiana” and “Body and Soul–” from a Norman Granz-arranged session in 1942–and comical turns along the way (“Call the Police,” “I’m an Errand Boy for Rhythm,” with dazzling solos by Cole and Moore, all tucked into a 1:40 time frame).

Newly-discovered and unveiled tracks—discovered by co-producers Matthew Lutthans and Jordan Taylor in the process of putting this opus together—add to the album’s intrigue and archival value. “The Romany Room is Jumping” was cut during a stint at Washington D.C.’s Romany Room,” while “Trompin,’” was a jukebox-bound Cinematone track, and the heretofore unreleased radio broadcast take of “Whatcha Know, Joe?, ” performed with just the trio, also jumps out for special attention.

Special attention also goes to Cole’s rich, resonant touch as vocalist, which stands out amidst other cheekier harmonized vocal parts and spotlights on other lead singers.

But, of course, we knew about that element of his music: it is Cole the Pianist who rules the day here. Cole’s stellar, technically adroit piano work, influenced by Earl Fatha Hines and full of rhythmic verve and emotional uplift, lines the path. He sensually stretches out on a 1941 “transcription” recording of “You’ve Changed,” with Boyer as vocalist, and flexes easily between the rare, moody minor-mode instrumental, “Fudge Wudge” (an ill-fitting goof of a title), and on the album’s title track, “Hit the Ramp.” That breezy, suave instrumental from 1941 which finds Cole and his soul mate (and here, fourths-stacking) Moore tearing it up, with customary taste and life-affirmative moxie.

Hittin’ the Ramp is a musical and jazz archival gift that keeps on giving, revealing a semi-secret repository and lively reliquary of Cole’s witty, warm urbanity of yore, in ways both recognizable and newly illuminating. Welcome to Nat’s world, before he became the Nat who would be, and was, king.