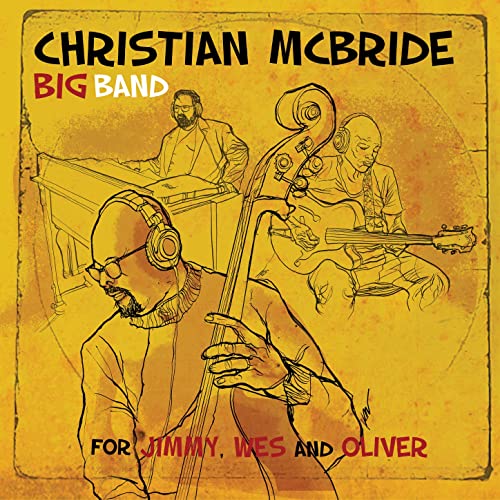 For Jimmy, Wes and Oliver

On their third release, For Jimmy, Wes and Oliver (Mack Avenue), the Christian McBride Big Band salutes three artists who were undoubtedly important in bassist-bandleader McBride’s musical development: Jimmy Smith, Wes Montgomery and Oliver Nelson. A veteran sideman and leader of his own groups, McBride first recorded with his big band in 2011, cherrypicking some of New York’s first-call players to fill up the sections. And it’s testament to McBride’s stature that most of them re-upped for the new session, with trumpeters Frank Greene and Freddie Hendrix, trombonists Michael Dease and Steve Davis and saxophonists Steve Wilson and Ron Blake, among others, returning to the fold. The slinky “Pie Blues,” our selection, begins with a staccato brass fanfare, which is punctuated by bass, guitar and organ, while trumpet slurs and wails recall the early years of hot jazz. McBride’s fellow Philadelphian, organist Joey DeFrancesco, lays down typically heated riffs on Hammond B3, before guitarist Mark Whitfield enters with a steamy blues solo of his own, followed by Carl Maraghi’s edgy baritone-sax solo. The full 17-piece swing machine engages in some hearty ensemble play, but McBride gets the last word, his bowed bass rumbling its way to the exit. The bandleader’s hearty chuckle and studio chatter shirttail the piece. “Hey, let’s get some of that!” he exclaims, to which we can only add, “Yes, please!”