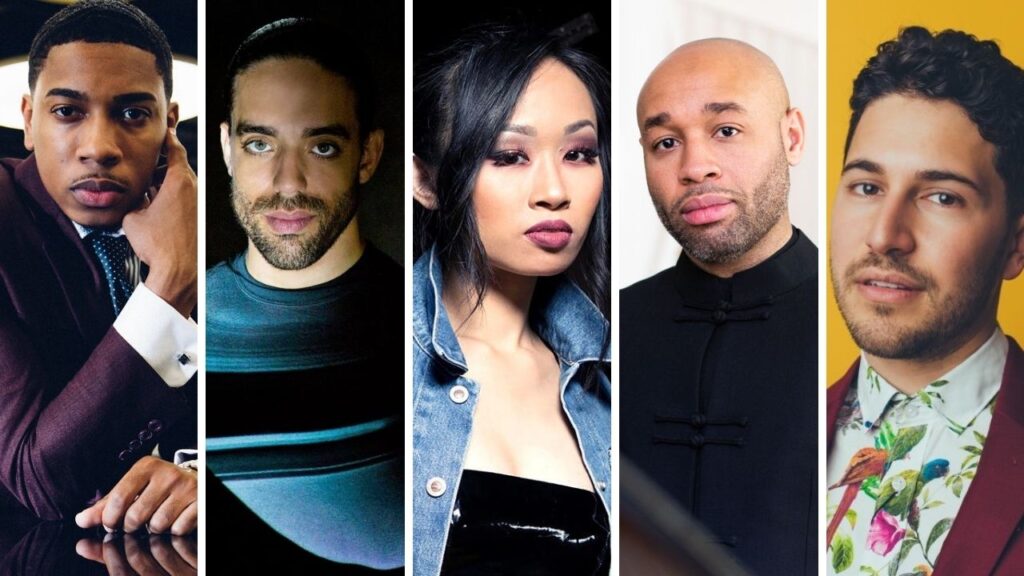 Jazz pianism today — in all of its compositional variety — serves as a roadmap to our shared cultural history. Through the innovations of ragtime and stride pianists like James P. Johnson and Jelly Roll Morton, swing players like Duke Ellington and Art Tatum, bebop pioneers like Thelonious Monk and Bud Powell, and post-bop experimentalists like Chick Corea and Herbie Hancock, we can track the unfolding of modern musical thought. Mack Avenue Records advances this legacy by providing a creative platform for several young pianists on the vanguard of new jazz traditions.

In February, the New York Philharmonic presented an online concert of selections from Mary Lou William’s luscious jazz symphony, Zodiac Suite. Aaron Diehl—like Williams, a third-stream adept — played the discrete movements with unflagging elegance. This sans-audience performance was one of the few gigs the Juilliard grad has had since the launch of The Vagabond, his third Mack Avenue release, almost exactly a year before.

How regrettable that the pandemic interrupted the concertizing that would have accompanied this remarkable record, with its even-handed reach into European and American musical idioms. The album’s vibrant jazz originals—plus new arrangements of works by classical giants Philip Glass and Sergei Prokofiev—beg for a live setting, if only to witness Diehl in action. Just how does one musician finesse disparate musical forces so fluently?

“I’m still trying to figure that out,” he said in a recent interview. “I was listening to Charlie Parker play a version of ‘Cheryl,’ and he quoted ‘West End Blues,’ by Louis Armstrong. That was when he had real genius, right? And I thought, how does this man create a completely new language that doesn’t sound derivative, but that is derivative at the same time? In a hundred years, only a few people do that. Not everybody has to—there can only be one Charlie Parker, one Armstrong, one Ellington, one Stravinsky. And I don’t know if I’ll ever get there. But it’s important for me to learn as much as I can from great artists like these.”

For Emmet Cohen, all great music is evergreen and thus at the player’s disposal. “I think that art is contemporary in general, but it spans all time periods—past, present, and future,” he explained from his Harlem home. “If you listen to Thelonious Monk or Duke Ellington, that music is ancient, but it’s also modern. And it affects people in the same way across time. That’s the case for all art.”

Cohen hints at this paradox in the title of his latest album, Future Stride, his Mack Ave debut and first major release. On the album, his originals brim with spontaneity and stylistic allusions without devolving into disarray or languishing in clichés; that he can interpolate so many fleeting musical notions into one mutating composition is astonishing. (And delightful.)

“People will say that [stride] is an old style of music, but it’s a style that I’ve fallen in love with,” he went on. “[In playing it], I get to interact with the music of [the stride masters] in one moment and then perform an original composition in the next. The originality is found in how we put the sounds and rhythms and vibrations together, the way you would ingredients from the pantry. We aren’t inventing new ingredients. We’re finding the unique combinations of sounds that push us into the future.”

Where Cohen allows for syncretism, Connie Han goes for purity. She wants to honor the achievements of her jazz forebears by extrapolating on the brilliance of their work. In particular, the L.A.-based musician credits the “spiritually charged, high-drama, deep-swinging jazz of John Coltrane and McCoy Tyner” for her trio’s fresh, neo-bop sound, characterized by her keen leader presence and bold attack on the keyboard.

“Staying true to your own path and having integrity allows the individual voice to really shine,” she said in a phone interview. “I am a very strong advocate of the tradition, but I’ve steered clear of different experiments—like hip hop—as a way of moving jazz forward. There are so many nuances within the existing jazz vernacular. The unique statement, I think, is what more can we say within the genre, without having to introduce new elements to it?”

Han launched her second Mack Ave release, Iron Starlet, in June 2020, during widespread pandemic lockdowns and near-universal tour cancellations. In this forced respite from performing, she found a rare opportunity to immerse herself in shedding.

“I’ve been expanding my range, particularly with dynamics and texture, and really filling out the solo skill set,” she said. “Even though jazz is a social art form, as a solo pianist you have to understand how to accompany yourself, how to create an environment. I want to transcend just playing notes.”

Like Han, California native Cameron Graves appreciates the concentrated intent that it takes to develop pianistic expertise. And like Cohen, Graves’ musical interests are surprisingly ecumenical. This said, he’s unwilling to sacrifice expertise for novelty. Luckily, he doesn’t have to.

“Not once did I half ass my education in the different genres,” he said, recalling his years of in-depth training in classical, jazz, R&B, pop, and rock. “Stanley Clark helped me a lot with finding my sound. He made me dig deep, because he knew that I had more of a composer’s mind. So when I started mix-moshing stuff it was easy for me to put R&B together with metal, or metal with an opera singer on top. Because I had studied the details.”

Even if you don’t know the details—which amp or guitar strings work best for a heavy rock sound, for example—Graves’ compositions on Seven, his second Mack Ave leader date, ring with authenticity. Pounding metal grooves fuse with intricate harmonies and refined solos, landing dead center on the continuum between aggression and persuasion. He calls this amalgam of influences “thrash jazz.”

“When you hear the music, you’ll go, ‘wow, this stuff is crazy,’” he said. “But the music, with its shock value, is what pulls you in. It has an energy to it, and you end up liking it and diving deeper. That’s my goal.”

For a year now, Christian Sands has been grappling with the strange reality of life without audience contact. For musicians like Sands, whose been gigging consistently since the age of nine, the sudden dearth of live performances has been especially shocking.

Into this vacuum, however, dropped his first Grammy nomination as a leader, for last year’s Be Water, his third Mack Ave record. The album’s stirring passages and exultant peaks underscore its positive, pre-pandemic message—to keep flowing, regardless of obstacles. Thus Sands, in heeding his own advice, continues to write and collaborate, even though he’s not on stage. But the new output, he says, is darker, bolder, and more angular.

“All of my ideas are built upon what I experience in the world,” he said. “They never come from just a stylistic choice, but from how I feel and what best captures that. I like thinking of it in smaller terms. Is there a destination that we’re trying to get to? That destination is defined by how we feel, by our emotions. With composition, the possibilities are endless because our emotions are endless.

“I’ve been playing piano since I was one,” he added. “It was the way that I expressed emotion, even before words. So, when I play, I am telling you how I feel and think, what I believe. With my records, I want to show you exactly who I am.”