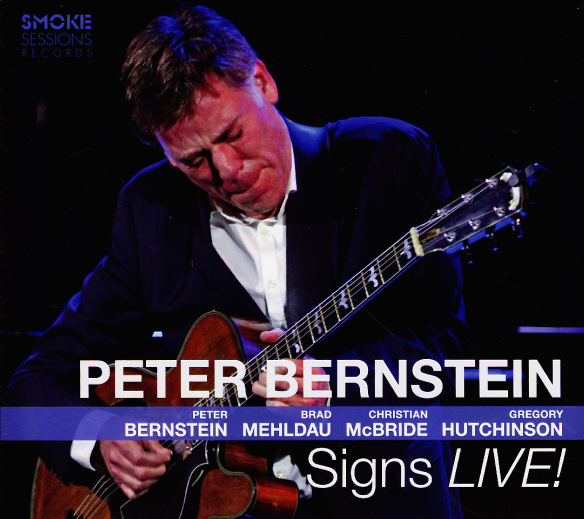 In 1994, guitarist Peter Bernstein assembled a rhythm section of rising-star sidemen for Signs of Life, his second recording as a leader. Since then, bassist Christian McBride and pianist Brad Mehldau have become two of the most celebrated instrumentalists of their generation. Rounded out by drummer Gregory Hutchinson, who’s also enjoyed a stellar career, the quartet has released Signs LIVE!, an 11-track, two-CD document of two Jazz at Lincoln Center concerts that were staged 23 years after the release of the quartet’s initial — and only — recording. The results reveal the evolved skills of these innovative players and the effortless way in which they bring out the best in one another.

“Dragonfly,” a Bernstein tune not included on the quartet’s original outing, shows how the group can make a lot out of little. The song boasts a blues-, funk- and Latin-informed vibe reminiscent of Freddie Hubbard’s “Little Sunflower” and other structurally simple but melodically attractive fares of the mid-1960s. Hutchinson is the groove-maker here, reveling in his arsenal of choppy rimshots and slashing cymbal attacks. Mehldau enters with single-note lines that gradually blossom into a more complex exploration of the form behind percussive chording and call-and-response choruses with himself. McBride remains characteristically supple and surefooted throughout.

Two Bernstein originals from Signs of Life, “Blues for Bulgaria” and “Jive Coffee,” are reprised in an affectionate, good-natured manner, as though two long-lost friends had suddenly reappeared. The guitarist, like his rhythm mates, is a master of understatement. Throughout the session, he demonstrates how much can be said with just the right inflection at the tail end of a bluesy chord. And while the impulse of pure spontaneity Bernstein and his bandmates radiate throughout is palpable, they also display a pronounced intellectual character and subtly calculated nuance that elevate the performances to a realm removed from any conventional quartet date.