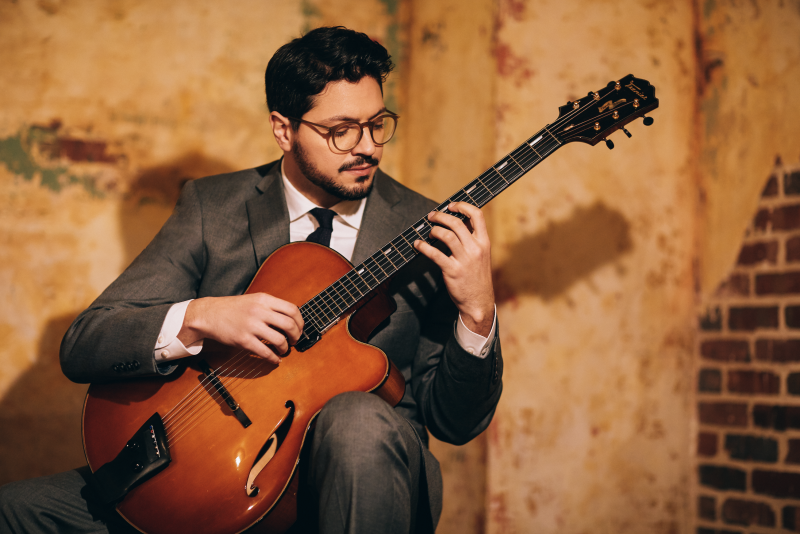 Pasquale Grasso may not be on your jazz radar on the moment, but the 30-year-old Italian guitarist is certainly getting noticed by the right people. In an interview with Vintage Guitar magazine, Pat Metheny called Grasso “the best guitar player I’ve heard in maybe my entire life,” adding that “he’s the most significant new guy I’ve heard in many, many years.” That’s high praise from a living jazz legend.

So don’t be surprised if Grasso starts popping up in your “artists to watch for” playlists, especially now that the guitarist in the midst of rolling out his new EP series with Sony Masterworks. The series, which launched in June and will continue through October, showcases him in the solo guitar format, where his intensive studies of both the masters of bebop and classical guitar technique “meld into a signature mastery that is at once unprecedented and evocative.”

Grasso’s first installment in the series, Solo Standards Vol. 1, was released in June and featured Grasso’s interpretations of Great American Songbook standards like “All the Things You Are,” Tea for Two” and “Dancing in the Dark.” The second installment, Solo Ballads Vol. 1, debuted in August and captured a quieter, more emotive side of Grasso’s playing. Highlights from that album included “Someone To Watch Over Me” and “Round Midnight” and “Body and Soul.” Just recently, Grasso produced a video for yet another of the album’s standout tracks, “Over the Rainbow,” which JAZZIZ is proud to premiere. In it, you can see for yourself the remarkable technical skill and artistic vision that Grasso brings to each performance.

The next installment in Grasso’s EP series, Solo Monk Vol. 1, will be released on October 11 and features the guitarist taking on the compositions of one of his earliest musical influences — Thelonious Monk — with equal measure reverence and reinvention. “It’s just genius music,” says Grasso of Monk’s work. More information can be found at pasqualegrasso.com.