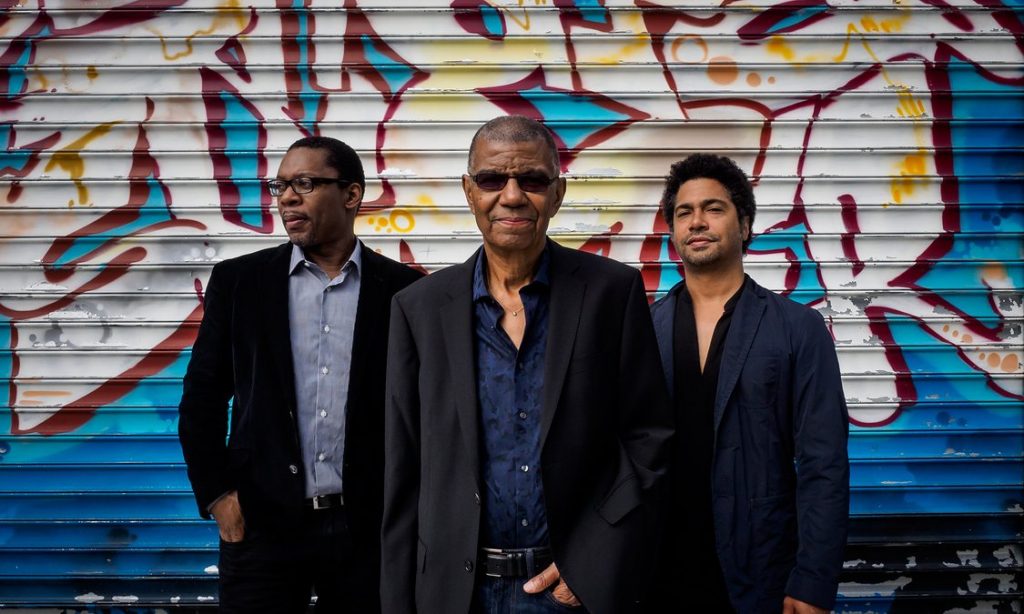 In the mid-60’s, a young Jack DeJohnette attended a John Coltrane concert at a Chicago music venue. At the time, DeJohnette was a young talented composer, drummer and pianist and was making a name for himself playing in other musicians’ ensembles and fronting some of his own. Meanwhile, Coltrane was making history with his celebrated quartet, featuring bassist Jimmy Garrison, pianist McCoy Tyner and drummer Elvin Jones. On this particular concert, the saxophonist asked DeJohnette to join them onstage for a few numbers. The drummer has often referred to this moment as one of the most important ones of his entire career.

Earlier this year, and around fifty years after the aforementioned event, In Movement was released on ECM Records. Produced by ECM label head Manfred Eicher, the album features DeJohnette playing alongside the sons of John Coltrane and Jimmy Garrison: saxophonist Ravi Coltrane and bassist Matthew Garrison. Although the trio played together for the first time in 1992, In Movement marks their debut studio recording. Despite their intertwining personal histories, the homages and influences from the past are just as important on this album as the search and exploration of new territories within the jazz idiom and beyond.

This statement  is made clear from the very beginning. The album’s opening track sees the trio ambitiously take on one of the most important compositions in jazz history: the Civil Rights-elegy “Alabama.” The song was composed by John Coltrane in response to the dramatic events surrounding the 16th Street Baptist Church bombing of September 15, 1963. On this tragic date, four members of the Ku Klux Klan planted at least fifteen sticks of dynamite attached to a timing device beneath the front steps of the Church. The explosion killed four young girls and injured many others. In the version presented by the trio on In Movement, after some evocative cymbal play by DeJohnette setting up the tone, Ravi Coltrane starts the song’s famous theme by playing its final part, which makes it seem like a continuation of Coltrane’s statement on racially motivated violence rather than a standard modern-day adaptation. Garrison gradually turns up the fuzz tone in his bass sound throughout the song, a move that adds further intensity to the mood of the piece.

The original version of “Alabama,” is also generally considered to be a significant landmark composition in John Coltrane’s personal artistic evolution, much like the live album on which it was first released (Live at Birdland, 1964). In the years that follow it, the saxophonist would enter freer territories, especially in terms of improvisation. Interstellar Space was certainly one of his wilder albums from his later years. The album was part of a wealth of recordings that were only released, on the Impulse label, after the saxophonist’s death and has since gone on to be considered as one of the saxophonist’s greatest works. Interstellar Space features Coltrane playing alongside drummer Ali Rashied. The music they recorded on this album serves as the inspiration for “Rashied,” from In Movement. On this track, DeJohnette on drums and Ravi Coltrane on sopranino play in much the same way. The resulting track is arguably the most faithful tribute presented on the album. (According to a press release, their performance inspired a standing ovation from the crew in Avatar Studios in New York City, where it was recorded.) 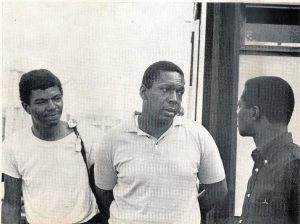 DeJohnette occasionally performed second drums alongside Ali onstage in the John Coltrane Quintet at the end of the ‘60s. In a 1989 interview with Rick Mattingly, later published on his book The Drummer’s Time: Conversations with the Great Drummers of Jazz (1998), DeJohnette said, “Rashied Ali is another favorite drummer. He and I worked together with Coltrane for a week in Chicago, and I really got a chance to know him. A lot of people didn’t understand what he was doing but when I first heard him play with [John] Coltrane at Newport, it just clicked. It was this multidirectional sound, multi-rhythms where he could play or play free over it, but it was all based out of the rudiments and time playing.” In that same interview, DeJohnette also sang the praises of Ali’s work on Interstellar Space. “One of my favorite records is Interstellar Space. There are a couple of drum solos on there that bring tears to my eyes. He gets that motion going – talks about that rolling sound!”

Ravi Coltrane also has a personal relationship with Ali. In a press release for In Movement, he says, “Rashied Ali was an incredible man, an incredible drummer, and somebody who affected us personally in a very deep way. Rashied was like a second father to me, just like Jack has become a second father to me.” This quote also reveals an important element of the album, which relates to the familial bond shared by the three musicians. DeJohnette, in fact, strengthened his family bond with the Coltranes and the Garrisons since those days of performing with them in the ‘60s. For instance, when in 2004, pianist Alice Coltrane ended her 26-year hiatus by recording her album Transcendent Light, produced by her son Ravi, DeJohnette contributed to the project by playing drums on five of its tracks. This bond is even greater in the case of Matthew Garrison. After the death of his father in 1976, Garrison and his family moved to Rome, Italy, where he began to study piano and bass guitar. When he returned to the United States, he lived in the house of DeJohnette, his godfather, with whom he continued his studies, before receiving a full scholarship to attend the Berklee College of Music in Boston.

In the years that followed, Garrison played bass with such artists as vibraphonist Gary Burton, pianist Herbie Hancock and guitarist John McLaughlin. He also made a handful of albums as leader, the first of which was his self-titled and self-produced release from 2001. Along with his skills as a bassist, he established a reputation as an electronic experimentalist. His second album as leader, Shapeshifter (2005), features compositions often blending ethnic, exotic melodies with electronica. On In Movement, his electronic layering, loops and chords add color and enhance the music’s soundscape. Often they even provide the framework for the group’s improvisations. Such is the case with the title track, with its looping chords and swirling layer of electronic noise, over which DeJohnette beats on his drum authoritatively and Coltrane blows on his soprano impassioned. Such electronic experimentation is as notable on the album’s original compositions as it is in distinguishing the trio’s versions of older compositions. “The use of electronics gives me the opportunity to re-imagine how I hear those compositions,” Garrison states on the album’s press release. “I like to be able to take those things and filter them through my own processes, and then they have to bounce off Ravi and Jack, so that the music becomes this series of undulating movements.”

Garrison’s words echo the mission implied by the title of the album, which also conveys the re-occurring theme of motion in DeJohnette’s over fifty-year career. The drummer has often described his music as “multi-directional” and whether it was through his involvement with the Association for the Advancement of Creative Musicians or his aptly titled acclaimed group Directions (and subsequent New Directions, with its constantly changing line-up), among many other notable projects, one always gets the feeling of DeJohnette’s music constantly heading places. His stylings and innovations have kept his works constantly new and invigorating. They have also contributed to the evolution of the music of his collaborators. Miles Davis recognized the size of his impact on the music they made together from 1969 to 1972, a time-span that included the transformative Bitches Brew (1970). On his 1989 autobiography, co-authored by Quincy Trope, Davis said “In the band with [pianist] Keith Jarrett and Jack DeJohnette, Keith and Jack dictated where the sound went and what they played, the rhythms they laid down. They altered the music and then the music pushed itself out into something else.” 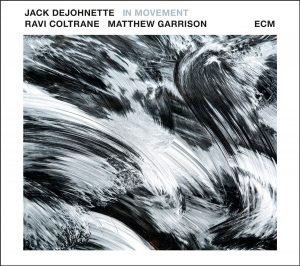 Something similar happens in the trio’s tribute to Davis on In Movement, a version of his smoky modal classic “Blue in Green” from Kind of Blue (1959), co-written by Bill Evans (DeJohnette was the only musicians to play in both men’s groups). On this track, DeJohnette dictates the rhythm through his piano for Coltrane and Garrison. Here, too, the music pushes itself out into something different. Like “Alabama,” this reading of reading of “Blue in Green” is recognizable, but the lack of drumming adds tension to the piece and makes it seem more abstract.

“Blue in Green” is also one of three tracks on In Movement on which DeJohnette sits at his second favorite instrument. The other two are his loving tribute to his wife “Lydia” and the album’s sweet closer, “Soulful Ballad.” DeJohnette’s musical training began on the piano, at the age of 4, before switching to the drums in his teens. Throughout the years, however, he has occasionally performed on the piano, gaining recognition for his skill and creativeness on this instrument, as well as others. On his debut album as leader, The DeJohnette Complex (1969), he also played melodica. Later, on his Golden Beams label meditation and relaxation albums, he experimented prominently with synthesizers. One of these releases, Peace Time, was awarded a Grammy for Best New Age Album in 2008. Earlier this year, DeJohnette released his first ever piano solo album, Returns. On it, he revisits some of his older compositions in solo piano format. The album was released on vinyl only on the French label NewVelle Records.

During the early part of his career in Chicago, before his move to New York City, he founded a number of piano groups. One of them, a trio, featured Maurice White on drums. White’s passing this February makes the inclusion of the Earth, Wind and Fire R&B track “Serpentine Fire,” a fitting celebration of his legacy. It’s also one of the highlights of In Movement. Its blend of jazz funk recalls the drummer’s stint with Davis’s fusion era ensemble, and the hard-grooving sophisticated backbeat echoes the grooves that Davis loved to play over. Coltrane seems to express the same type of delight, showcasing his own, slow, snake-like and hypnotic phrasing. That song is directly preceded by “Two Jimmy’s,” a joint tribute to fellow innovators Jimmy Garrison and Jimi Hendrix. The song, written by the trio, showcases the undulating movements referred to by Matthew Garrison, with its modal Middle Eastern influenced psychedelic synth and a treated bassline.

Every track on In Movement has a fascinating history behind it. DeJohnette, Coltrane and Garrison’s past is inescapably interlinked. Yet, what truly makes this album stand out is the plain excitement the three musicians showcase by the simple act of playing with one another. This excitement and delight allows them to experiment with new sounds, often breaking through the boundaries of jazz. It is therefore hard to disagree with DeJohnette’s statement, from the album’s press release, in which he says: “I’m inspired by what we did – we got into some amazing sonic grooves. It’s a continuation, a moving our music forward – music that’s not locked into any one genre. I know I haven’t heard any combination like this. There’s the past and the present and the future in what we are doing.”