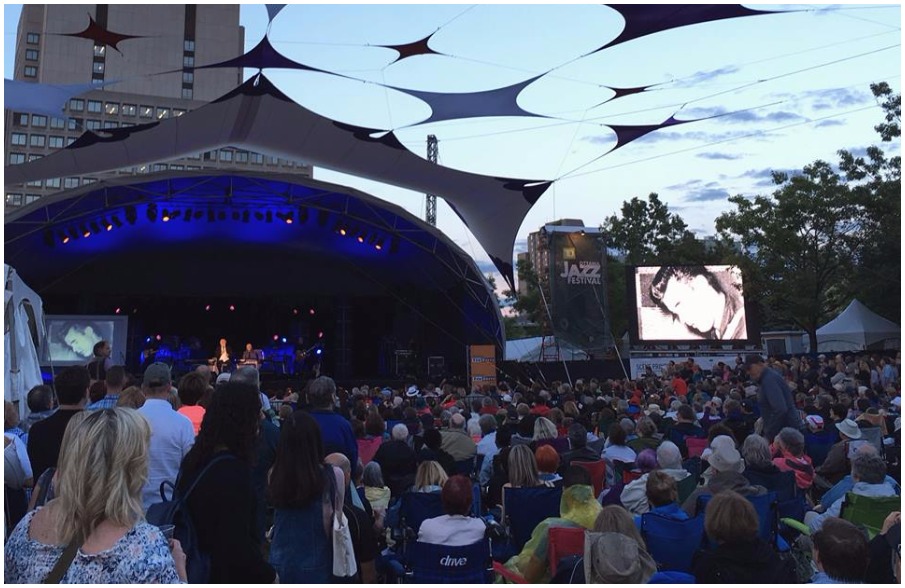 James Hale wraps up his report on the 2017 TD Ottawa Jazz Festival.

For its 37th edition, the TD Ottawa Jazz Festival had the advantage of reaching a much larger audience than ever before. Tens of thousands of tourists were swarming through Canada’s capital city for the nation’s 150th birthday celebration. But that celebration brought challenges, too: higher security measures, street closures, and many more competing events than the festival usually faces. As well, the exterior of the National Arts Centre—one of the festival’s prime venues—continued to resemble a massive construction site, although its new facade was revealed to the public before the festival wrapped up on July 2.

In addition, there were weather challenges to contend with. Colder-than-average temperatures and ongoing downpours curtailed attendance at the festival’s outdoor main stage on several nights. That was never more evident than on the evening that a transportation issue demanded that The Bad Plus be shifted into the headlining spot to replace Charlie Haden’s Liberation Music Orchestra, which was stranded by a storm in New York City. The Bad Plus has headlined the festival before, drawing 5,000 people to the venue, but on a chilly evening barely 1,000 fans shivered through a lackluster set by the trio.

Other main stage outdoor shows covered the gamut—from country-pop legend Kenny Rogers (in the midst of his final tour) to British R&B belter Joss Stone (who appeared to have picked up a move or two from her former bandmate Mick Jagger) to popular Canadian rockers Serena Ryder and Feist.

The inside venues focused more on jazz artists like Hudson—the new supergroup consisting of Jack DeJohnette, John Scofield, Larry Grenadier and John Medeski—who disappointed several hundred people who were hoping for a seat. The presence of Hudson, as well as performers like Bill Frisell, Kenny Barron, Robert Glasper and Donny McCaslin, illustrated the festival’s determination to remain in the top rank of the summer circuit. Although in recent years the festival has moved artists like these to smaller indoor venues in favor of pop and rock musicians who draw more than just jazz fans, it remains committed to keeping a large percentage of improvisers among the 800 performers it books.

The festival has also maintained its determination to find new venues, in an attempt to attract a broader audience from across the community. Ottawa has been undergoing wide-ranging renovations in preparation for the 150th party, and one benefit has been a new performance space on the eastern edge of the urban core, which provided the festival with an additional soft-seat venue and a chance to expand its footprint. A traditional black-box space inside a multi-use theater, the venue at La Nouvelle Scene provided a number of the festival’s highlights. Included among them was an exceptionally rich and wide ranging performance by BassDrumBone—bassist Mark Helias, drummer Gerry Hemingway and trombonist Ray Anderson. Celebrating their 40th year together, the three musicians dipped into their deep repertoire and reservoir of extended techniques.

In the same space, drummer Nick Fraser—an Ottawa native who lives in Toronto—led an expansive trio with the much-in-demand pianist Kris Davis and veteran saxophonist Tony Malaby. Fraser cut his musical teeth as an observer and jam session participant at the Ottawa Jazz Festival, and it would be difficult to find a better example of how a festival like this spreads the beauty and power of improvised music.