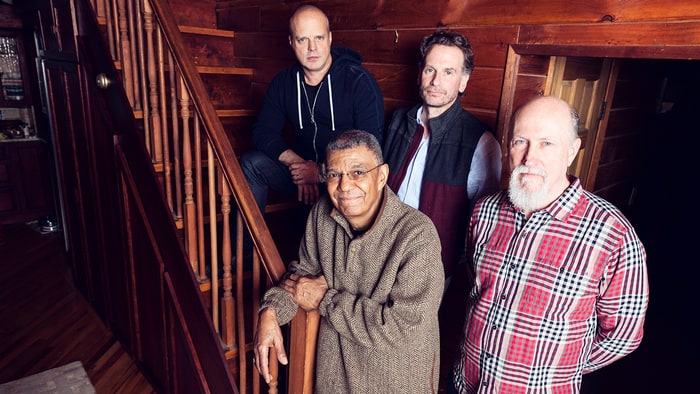 Opening the concert by the co-operative quartet Hudson, drummer Jack DeJohnette launched into a riff that was funkier than anything he has recorded since his epochal Elvin Jones-meets-Clyde Stubblefield intro to Miles Davis’ “What I Say” on the trumpeter’s Live-Evil album in 1970. The fact that this booty-shaking set of flams and single-stick explosions was an introduction to Jimi Hendrix’s “Wait Until Tomorrow” announced Hudson’s raison d’être. All four members—DeJohnette, guitarist John Scofield, keyboardist John Medeski and bassist Larry Grenadier—live in the Hudson River Valley north of New York City, and they share an interest in extrapolating and improvising on the music associated with the area from the 1960s and ’70s.

Another Hendrix piece, “Castles Made Of Sand,” allowed them to explore the sonic possibilities that occur only at high volume, while The Band’s “Up On Cripple Creek” gave DeJohnette and Grenadier the opportunity to dig into the slippery-beat feel that one-time Woodstock, New York, denizens Rick Danko and Levon Helm rode to rock stardom. Bob Dylan’s “A Hard Rain’s A-Gonna Fall” was articulated by a beautifully arpeggiated solo by Scofield, but it was rapidly deconstructed by Medeski into a howling maelstrom—the contemporary political point driven home decisively by Scofield, who echoed Hendrix’s Woodstock-closing “Star-Spangled Banner.”

To end the show, the band turned to more gentle territory—Joni Mitchell’s lyrical “Woodstock,” joining the raft of jazz musicians who have used the Saskatchewan singer-songwriter’s unique chords as an opening to expansive improvisation.

Concept-driven projects like Hudson often succeed better on paper than on stage, but this was one all-star band that coalesced around the right things, and with musicianship as high as these four players bring to everything they touch, this was a recipe for success.