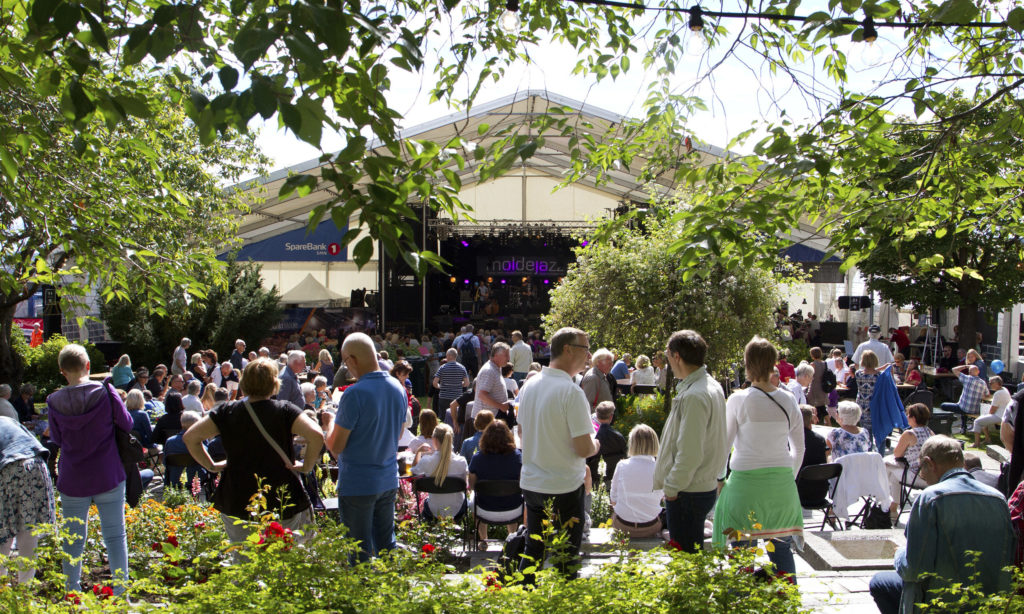 Moldejazz, verging on its milestone 60th anniversary in 2020, is the oldest and widely considered the finest of Norway’s strong and steady jazz festival scene. It also qualifies, along with such other seasoned jazz festival pioneers as Newport and Monterey, in the category of events with a dichotomous inside-outside charm and substance.

Outside in the idyllic small Norwegian town, north of Trondheim and adjacent to the ocean-hugging “Atlantic Road,” visitors are treated to the healing properties of western Norway. Inside, in the several venues where the musical action unfolds, jazz of various stripes comes alive and engages the mind. It’s a win-win.

Like those seminal American jazz festival models, Molde is a destination location in itself, situated along an actual fjord (the Romsdalfjord) and surrounded by stunning western Norwegian natural splendor and in view of 222 snow-flecked mountain peaks on the horizon. In other words, the annual July fest is well worth a trek for even those only marginally tuned into the jazz cause — those who, for instance, might only primarily be interested in this year’s general audience marquee bait of Melody Gardot and jazz-pedigreed funk-meister Marcus Miller. A more moving “mainstream” act, in the large Bjørnsonhuset venue of the fjord-nuzzling Scandic Seilet hotel, was official festival-opener Gregory Porter, bringing his soulful Marvin Gaye/Nat King Cole/Bill Withers/Gregory Porter patois and unique original material to life.

Ambrose Akinmusire had his own genre-crossing field day with his intriguing but not entirely cohesive Origami Harvest project, divvying up musical responsibilities between rhythm section, string quartet and rapper Nappy Nina.

Come festival time, for six days, the town of Molde is literally transformed. Daily street parades of the New Orleans-ian ilk announce the day just before noon, and traffic-blocked blocks of vendors and tents line the main street. The central Alexandra Park, across from the hub hotel of the Alexandra, becomes an outdoor venue, with acts such as a tight, reconstituted Blood, Sweat and Tears, before the post-midnight dance/electronic sounds pumping into the wee hours.

Cuisine beckons, both inside official eateries and with such street food options as Elgburgers (elk burgers: reindeer is available in other forms) and the stuffed-baked potato treats of the “bakt potet” vendor.

Local beauty aside, Molde’s turbulent history is evident in subtle and dramatic ways. It is a rebuilt city, post-1940, when the infamous Nazi bombing and occupying of western Norway devastated the status quo in this spot once known as the “city of roses.” The rose population has since diminished.

For a scenic slice of the old Molde, head up the steep streets to the culturally-enriched escape zone and heritage haven of the Romsdalmuseet, with its well-preserved houses, often thatch-roofed, and recreated streets in the old-style. An illuminating museum details the region’s long history and devotes a room to absurd modernist German artist Kurt Schwitters, who spent time in the Molde area in the 1930s, avoiding the Nazis and savoring the peaceful enclave in his stone dwelling on the nearby Hjertøya island. (Pop over on a boat and you can visit the Schwitters dwelling, along with the small island’s other appeals).

The festival also has an important stake up at the Romsdalmuseet, presenting multi-act concerts in a vast lawn area. The first time I visited Molde, in 1999, I remember catching Ray Charles and Joe Zawinul’s band, and two years ago, Esperanza Spalding livened up the outdoor space. This year, the musical component went pop, with Madrugada and Highasakite.

Among the discoveries in the Norwegian segment of the program were young and innovative artists demanding attention, now and in the future. Young singer-songwriter Siril Malmedal Hauge, who played in the intimate “Storyville” venue atop the central Plassen compound on opening day, presents an entrancing twist on the fertile soil combining art-folk, jazz colors, post-Joni Mitchell elements and a certain personal stamp and allure.

By contrast, the wily young quartet Master Oogway — dirty-toned electric guitar, tenor sax, acoustic bass and drums — brought it on in its own way. Call it toothy yet tie-dyed psychedelic Nordic punk jazz. Bassist Sigurd Hole delivered a bold but meditative solo bass performance over the course of a hypnotic hour in the compact Radsalen room, dwelling in a landscape of enigmatic harmonics, impressionistic melodic logic and ambient aesthetics of his distinctive devising.

As a sweet, deep almost-finale, the final night featured the transcendent duo of Bill Frisell and bassist Thomas Morgan, with drummer Nilssen lending an empathic sit-in at the end.

At festival’s end, new of next year’s artist-in-residence was announced: madly prolific polymath John Zorn. “Zorn by the fjord” might seem an odd cultural equation, but Moldejazz has a long-standing habit of accommodating all modes of adventurism. Mark your calendar.