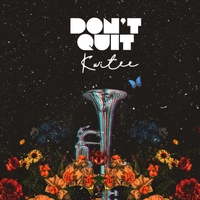 Okwi Godwin Iguwe also known as Kwitee hails from Abia state, eastern Nigeria. Though he was born and brought up in Warri, Delta state, owing to the ambitious nature of his parents, he lived his early life with his late maternal grandmother, who gave him every push and support he needed. She always insisted he goes to church with her for all church services and programs where he got attracted to the music department, this jump started his musical career at the age of 9 as a percussionist. He eventually became a front-line drummer at the age 11.