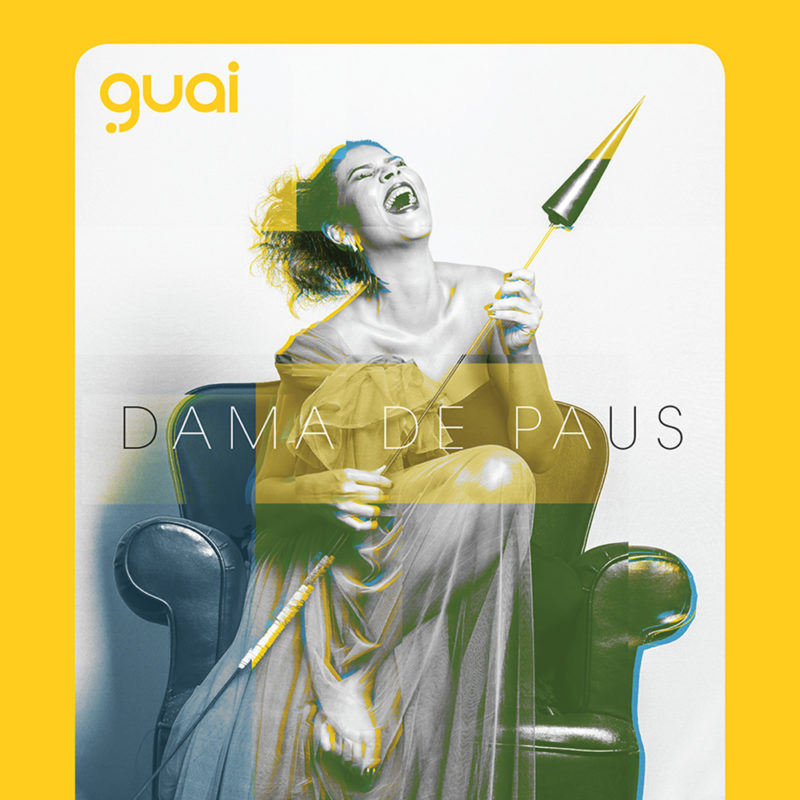 A Brazilian who has Brazil and Jazz in her voice and soul. She had her first stage experience at the age of four. In 2016 she released her debut album independently, titled DAMA DE PAUS. A bold and conceptual work that struck great reviews of important music journalists and also of the biggest names of Brazilian music, such as Roberto Menescal, Ivan Lins, Carlos Lyra and others. She was nominated for the biggest music awards in Brazil in 2011, 2012 and 2017. That year, she has been internationally launched in Lisbon, Portugal, where she is currently based.

Daughter of a pianist father and a singing mother, GUAI was exposed to music from an early age was was destined to fulfill a personal mission: to sing. At the age of four, her talent, voice and unique style were impressive. She grew up and studied Social Communication and Marketing but she never let go of her real love to sing and perform. With time, GUAI music matured and she became one of Brazil's most sophisticated singers.

Through her musical performances and travels, GUAI became sensitive to the diverse musical influences present in Brazil's music. She has an impressive collection of achievements. In 2009, she created, produced and directed the daring "Eu, Ella & Elis: the divas of Jazz":, a concert in which she tested and expressed her extraordinary talents as a music interpreter.

In 2011, GUAI. in partnership with the label QLouva Music, made an audacious rereading of Noel Rosa's classic "Último Desejo" (Last Wish). This was the origin of her first music video and was nominated as a finalist in Brazil's biggest musical Award the 22nd Brazilian Music Award (formerly the Sharp / Tim Music Award). GUAI was also nominated as a finalist of this prestigious award in 2012 with her performance of "Coisa Feita", song written by Joao Bosco.

In 2013, GUAI moved to Rio de Janeiro. There she met Nema Antunes with whom she performed "Senhorita" (the Miss) project in which she is accompanied by distinguished instrumentalists. Two years later, this partnership would resulte in her debut CD "Dama de Paus" a contemporary work with a clear influence of Jazz, Afro-Brazilian rhythms, groove and samba. This album got importants reviews around the world and it was critiqued by such notable music stars as Roberto Menescal, Carlos Lyra, Ivan Lins and recommended to audiences for their listening pleasure.

In 2017, GUAI was nominated for Best Female Vocal for the Brazilian Caymmi Music Award. That same year, GUAI lauched her international career with a performance in Lisbon, Portugal which received higt praises from both Brazilian and Portuguese media. In Portugal, she promoted a season of performances, including television appearances.

Artistically restless and in a constant state of interpreting music in GUAI's fresh and unique style, she entered into her most inspirational season in 2018. After careful selection of her repertoire and, again, using the exuberance of the best of Brazil's musicians, she is once again presenting her formidable musical arts to the delight of public audiences of good Brazilian music. This new music is full of surprises and great musical art.