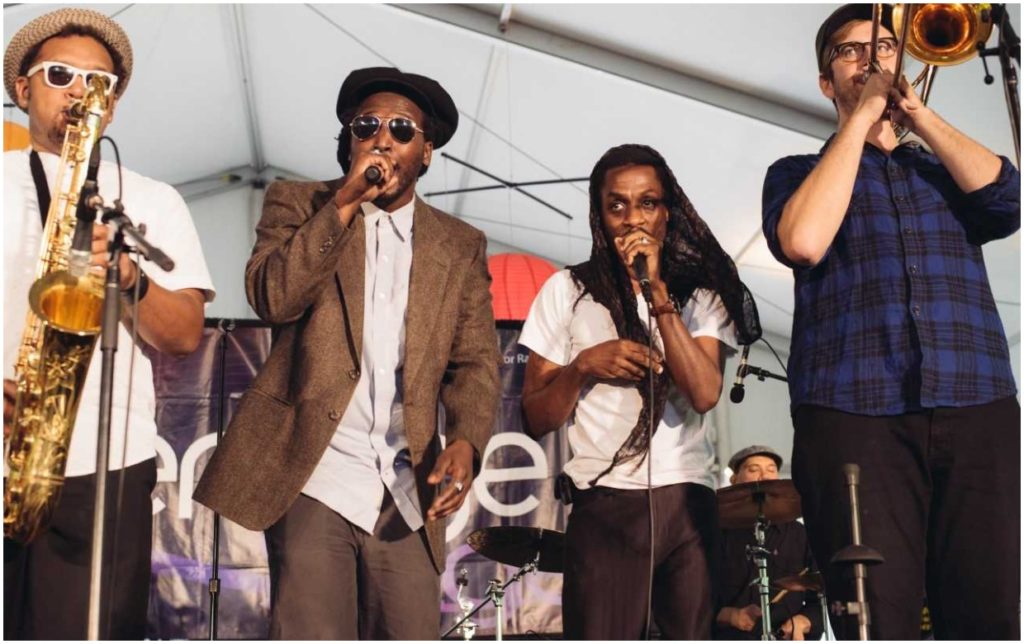 Looking for some Monday motivation? We’ve got you covered. This week’s “fab five” list of new songs that you can listen to right now to start your week the right way includes a video premiere from an exciting Chicago-based second line marching jazz fusion group, a live performance of a new song from the first joint album by two major figures of the British music scene, the riveting sound of plucked cellos and more.

“Don’t Wait! Right Now!” is a new song by Chicago-based second line marching jazz fusion group LowDown Brass Band, and you can watch the premiere of the video for the song via the player below. This Afrobeat tune written by saxophonist Chris Neal also features Fada Dougou, a singer-songwriter with West African and Native American roots, singing in Djioula, his home language, and it is included on the band’s recent album, LowDown Breaks. Neal tells JAZZIZ that it is “a call to action and an urge for revolution. I, like so many of us, am frustrated by the political landscape, crippling oppression and inequality amongst brothers and sisters because of selfishness and misguided entitlement. If you feel called to do something, change something, start something – do it! Don’t wait! Right now!”

Jacob Collier, “With the Love In My Heart”

Singer-songwriter and multi-instrumentalist Jacob Collier shared the video for “With the Love In My Heart,” a composition from his forthcoming magnum opus Djesse – a four-volume and 40-song project that will be released over the next year, with the first of these volumes out on December 7. The music from Djesse was recorded with the Grammy Award-winning Dutch ensemble Metropole Orkest, and this collaboration marks the first time Collier has ever scored for an orchestra. The set will also feature guest appearances from Laura Mvula, Take 6, Voces8 and the Moroccan Gnawa musician Hamid El Kasri, among others. Each volume of Djesse, which traces Collier’s life in 2018, will find the artist exploring a different musical fabric and feel.

Piano prodigy Joey Alexander shared the video of his studio performance of “Blackbird,” a cover of the famous Paul McCartney solo effort from The Beatles’ The White Album, released in 1968 – and he plays it with the sensibility of a seasoned master. His take on this song is also included on his latest album, Eclipse, which was released on May 4 via Motéma Music. Eclipse was recorded in just over three days. It features contributions from saxophonist Joshua Redman and bassist Rueben Alexander, among others, and its sound ranges from classical to jazz to gospel. “This album represents who I am,” Alexander said via an official statement.

Marc Almond, the vocalist of Soft Cell fame, recently teamed up with another revered figure of British music, pianist and bandleader Jools Holland, on their first joint album, A Lovely Life to Live, released last week on November 23. They recently made an appearance on Holland’s own popular British TV music show, Later… with Jools Holland, where they performed “Mercedes 600,” one of the album’s original compositions. “If this record were to be a movie, it’d be a black and white movie of the late ’50s or ’60s, set in London and starring Dirk Bogarde – with maybe a brief visit to Paris where we’d meet Deneuve and Delon in a smoky bar,” said Almond. “Jools and I have a performing history that stretches back many years now and at last we can bring our joint love of Bogarde, London, vintage cars, afternoon tea and the blues to a record.”

Me and My Friends, “You Read My Mind”

“You Read My Mind” is the new single from Look Up, the forthcoming album by UK-based quintet Me and My Friends, which will be released next month. The group focuses on creating a timeless sound with a global outlook, and are known for making soulful, poignant, danceable music that references many styles. “You Read My Mind” features sparkling guitar lines, an addictive vocal hook and a bouncy, syncopated groove, and pays tribute to the vintage Ghanaian highlife greats. The riveting sound of plucked cello also leaves its mark; songwriter Nick Rasle explained that the band had been “toying with using plucked cello as a lead line for a while, as we felt it’s such an underused texture – more melodic than the double bass, and more meaty than the violin or viola.”