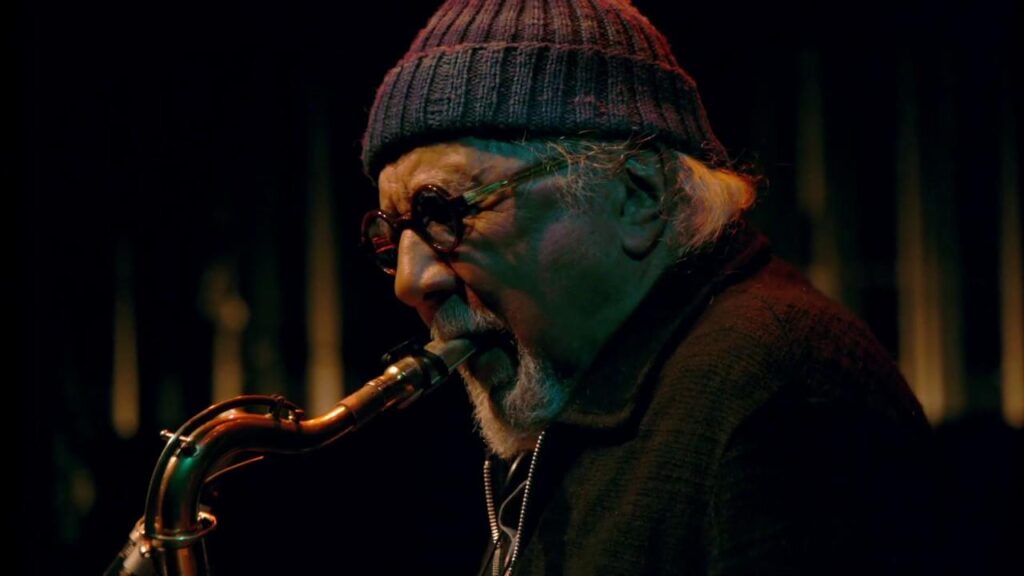 Looking for some Monday motivation? We’ve got you covered. From cross-cultural music to a sax legend’s 80th-birthday celebration, here are five new songs that you can listen to right now to start your week the right way.

Farafi is an exciting, nomadic duo presenting an eclectic collection of sounds inspired by the music traditions of Africa, the Middle East, India and Western contemporary music. The duo is made up of Joy Tyron and Darlini Singh Kaul, who both sing and play a variety of instruments, many of which are traditional. “Gina” is one of the songs from their debut album, Calico Soul, released on November 8 via Piranha. This video presents a live studio performance of the song, filmed at Rad Ryah’s studio “indoor jungle,” which provides the perfect backdrop to this transportive music.

This video of Charles Lloyd performing his “Requiem” was filmed at his special 80th-birthday concert at Santa Barbara’s Lobero Theatre last March. The concert featured the saxophone great alongside guitarist Julian Lage, pianist Gerald Clayton, bassist Reuben Rogers, and drummer Eric Harland, with special guests organist Booker T. Jones and bassist/Blue Note president Don Was joining the ensemble midway. The show is documented in a new live album, 8 Kindred Spirit, and this video is part of its limited edition’s accompanying DVD, due out February 14.

Classic Bollywood movies scores, Spaghetti Western soundtracks, Indian folk and jazz improvisation are just some of the influences blending into one on Sunny Jain’s upcoming album Wild Wild West, due out February 21 via Smithsonian Folkways. The musician/composer has released the title track and accompanying videos, and says about the song that it is about his multi-cultural lineage: “The courageousness of all immigrants to leave their family and home in search of opportunity in a foreign land is a wild and bold move. One that truly embodies the romanticized ideas the cowboy has always professed to be.” The video for “Wild Wild West” was directed by Adeel Ahmed and was filmed throughout various locations, including Manhattan, Los Angeles, New Delhi, Rajasthan and more.

Tower of Power, “Step Up”

R&B-based horn section and band Tower of Power have been rocking their eclectic, soulful and funky sound since 1968. They are all set to release a brand new album, Step Up, on March 20. The title track presented here is one of 14 compositions featured on the LP, and that was written and arranged during a careful 6-year-long process and recorded in the same sessions of Soul Side of Town (2018). “Lyrically, it’s a call to ‘Step Up’ and do whatever’s needed to succeed in life’s endeavors,” says Tower of Power’s Emilio Castillo. “The track has super soulful background vocals and the B3 solo is completely off the charts!”

“We’ve Landed” is a new track from Rejoice, a special collaborative album by drummer and Afrobeat pioneer Hugh Masekela, and the Father of South African Jazz, trumpeter Hugh Masekela. The album, originally recorded in 2010 by producer Nick Gold, finds them accompanied by a new generation of well-respected jazz musicians, including Tom Herbert, Joe Armon-Jones, Mutale Chashi and Steve Williamson. Due out on March 20 via World Circuit, this is Masekela’s first posthumous release. In addition to his unique drumming style, Allen contributed a semi-spoken commentary to “We’ve Landed.” “The song is dedicated to today’s youth,” he explains via an official statement. “The lyric addresses people at 17, 18, 19 years old, who are slowly becoming more mature, finding out who they are and realizing that it’s their generation’s turn to wake up!”