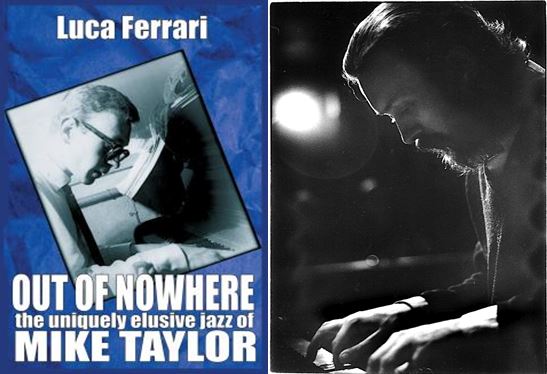 In January 1969, a man known as Mike Taylor drowned in the River Thames near Leigh-on-Sea, UK. Despite having had a brief but intense career as a jazz composer, pianist and recording artist in the British scene of the mid to late sixties, his death was widely unremarked. Now, a new biography entitled Out of Nowhere, written by underground author Luca Ferrari and published by UK’s Gonzo Media aims to resurrect his memory.

Ferrari says: “My book was a real challenge because apart two good articles nothing was known about Mike Taylor, just some dates from his past, often fakes, never verified.”

Mike Taylor was born in 1938 in Ealing, West London. Having rehearsed and written extensively throughout the early sixties, he recorded two albums for the Lansdowne series produced by Denis Preston. The first was a standard hard-bop driven record named “Pendulum” (1966), with drummer John Hiseman, bassist Tony Reeves and saxophonist Dave Tomlin. The second “Trio” (1967), with Hiseman and bassists Jack Bruce and Ron Rubin, geared more towards a temperate free jazz style.

His pieces were recorded and played by many of his contemporaries. Among them, rock legends Cream. Three of Taylor’s compositions – Pressed Rat and Warthog, Passing the Time and Those Were the Days – are featured in their album Wheels of Fire (1968) with lyrics by drummer Ginger Baker.

A failed marriage and heavy drug use would mark his demise. He would spend the last two years of his life homeless and painfully wandering around London, often near Kew and Richmond Park, until his sudden death in the water of Thames.

It was not before 2007 that his memory was somewhat resurrected, when the independent record label Dusk Fire Records released Mike Taylor Remembered for the first time – a 1973 tribute to the musician by Neil Ardley, Jon Hiseman, Ian Carr, Barbara Thompson and other major modern British jazz players.

And now, his memory lives on with the first biography on his life Out of Nowhere by Luca Ferrari, who has written extensively about rock and folk music in the past. “Listening to [Mike Taylor’s] few records I discovered this wonderful obscure world of sounds, a very rare dimension of intimacy, made of experimentations and great sensibility”, Luca says. “This book is a sort of reparative way to celebrate his musical genius and to recollect his life.”