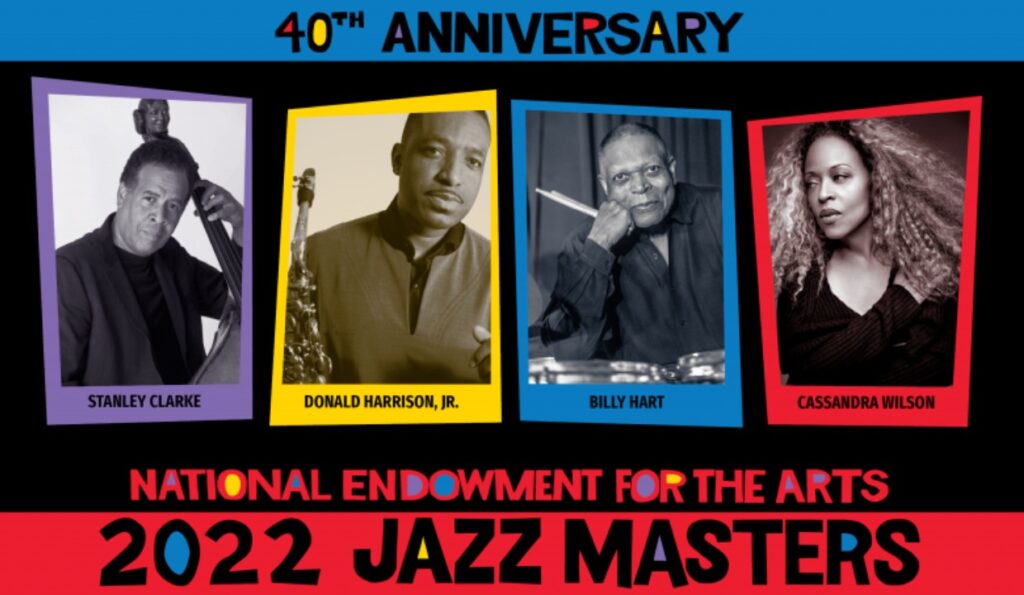 The National Endowment for the Arts, which celebrates its 40th anniversary next year, has announced bassist Stanley Clarke, drummer Billy Hart and vocalist Cassandra Wilson as the 2022 NEA Jazz Masters. Saxophonist Donald Harrison, Jr., has also been announced as the recipient of the 2022 A.B Spellman NEA Jazz Masters Fellowship for Jazz Advocacy.

According to an official press release, each recipient will receive a $25,000 award. In addition, they will be honored in a concert on March 31, held in collaboration with and produced by SFJAZZ. The concert will take place at the SFJAZZ Center in San Francisco, California, in front of a live audience. It will also be livestreamed online.

Stanley Clarke is one of the most influential bass players in modern jazz history. In addition to his acclaimed solo career, Clarke is fondly known as a founding member of one of the most popular jazz fusion bands of all time, Return to Forever. In 2001, he founded the Stanley Clarke Foundation, a charitable organization that awards scholarships to talented young musicians each year.

Billy Hart is one of the most sought-after and versatile jazz drummers of his generation. He’s heard on over 600 recordings by such greats as Miles Davis, Herbie Hancock, Eddie Henderson, Stan Getz, Lee Konitz and many more. He’s also recorded twelve albums of his own as a leader and is a member of the jazz supergroup The Cookers.

Cassandra Wilson‘s body of work has expanded the definition of jazz, and her voice and arrangements have provided definitive versions of several standards in jazz and many other genres. In addition to her own albums as a leader, she has been featured on recording sessions led by other greats and earned critical acclaim for her performance on Wynton Marsalis’ Pulitzer-winning Blood on the Fields jazz oratorio, released in 1997.

Known for his hard-swinging, improvisational style, Donald Harrison, Jr., was one of the architects of “Nouveau Swing” and a mentor to several now world-renowned jazz artists. He is also recognized for his work and dedication to preserving the music and culture of his native New Orleans, including after the devastation of Hurricane Katrina in 2005, when he created employment opportunities in his own bands for young musicians who remained in the city.

“The National Endowment for the Arts is proud to celebrate the 40th anniversary of honoring exceptional individuals in jazz with the NEA Jazz Masters class of 2022,” said Ann Eilers, acting chairman for the National Endowment of the Arts. “Jazz continues to play a significant role in American culture thanks to the dedication and artistry of individuals such as these and we look forward to working with SFJAZZ on a concert that will share their music and stories with a wide audience next spring.”

The NEA Jazz Masters Fellowship is the highest honor that the United States bestows on jazz artists. Since 1982, it has honored musicians representing a wide range of styles and instruments, and the A.B. Spellman NEA Jazz Masters Fellowship is given to individuals who have made major contributions to the appreciation, knowledge and advancement of the jazz art form. 165 fellowships have been awarded to such great figures as Ella Fitzgerald, Dizzy Gillespie, Charles Lloyd, Pat Metheny, Carla Bley, Sonny Rollins and many more.