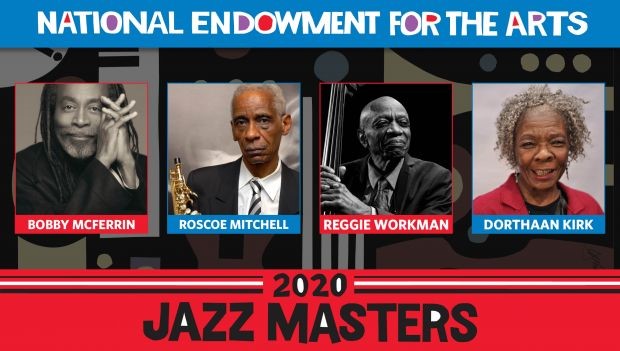 They will be celebrated at a tribute concert on April 2, 2020, at the SFJAZZ Center in San Francisco, California, in collaboration with SFJAZZ.

Bobby McFerrin is one of the world’s most famous vocalists, admired around the globe for his astounding four-octave range and multi-phonic technique. A t10-time Grammy Award winner, McFerrin has moved comfortably among genres, and has won awards in both jazz and classical. His 1988 crossover hit “Don’t Worry Be Happy” became the first a cappella song to hit No. 1 on the Billboard 100 Charts. But even at the height of pop music success, he continued to hone his jazz bona fides, forming powerful musical partnerships with pianist Chick Corea and bassist Richard Bona.

Chicago-born Roscoe Mitchell is a living legend of avant-garde jazz and a key figure in the Association for the Advancement of Creative Musicians, a Chicago-based nonprofit organization founded in the mid-1960s to advance new creative music. As a composer he draws from various wide-ranging sources, from classical music to funk to African folk songs, and he has maintained a prolific recording career that includes dozens of albums under his own name and with artists like Wadada Leo Smith and Anthony Braxton. He currently serves as the Chair of Composition at Mills College in Oakland, California.

Bassist Reggie Workman has been a member of two of jazz’s most important groups: the John Coltrane Quartet and Art Blakey’s Jazz Messengers. Outside of the mainstream, he has maintained a rich sideline in the avant-garde, working with Yusef Lateef, Pharoah Sanders, Oliver Lake and Andrew Cyrille, among others. He also is a professor at the New School’s College of Performing Arts in New York City, where he has been teaching since 1987.

Dorthaan Kirk is a jazz radio pioneer and an integral member of WBGO Jazz 88.3 FM, Newark Public Radio — working in various roles for more than four decades. Called “Newark’s First Lady of Jazz,” Kirk has been active as a curator and producer of jazz events primarily in and around Newark, New Jersey, and is an avid supporter of musicians and jazz education for children. She will be receiving the A.B. Spellman NEA Jazz Masters Fellowship for Jazz Advocacy.

NEA Jazz Masters Fellows are nominated by the public, including the jazz community. Jazz Masters Fellowships are up to $25,000 and can be received once in a lifetime. The 2020 recipients will be honored on April 2 at the SF JAZZ Center’s Robert N. Miner Auditorium in San Francisco, marking the first time in nearly 14 years that the NEA Jazz Masters award ceremony and tribute concert will take place in California. The event is free and open to the public and will be available to worldwide audiences via a live webcast. For more information about this event, as well as other related NEA Jazz Masters events in San Francisco, visit the NEA website.