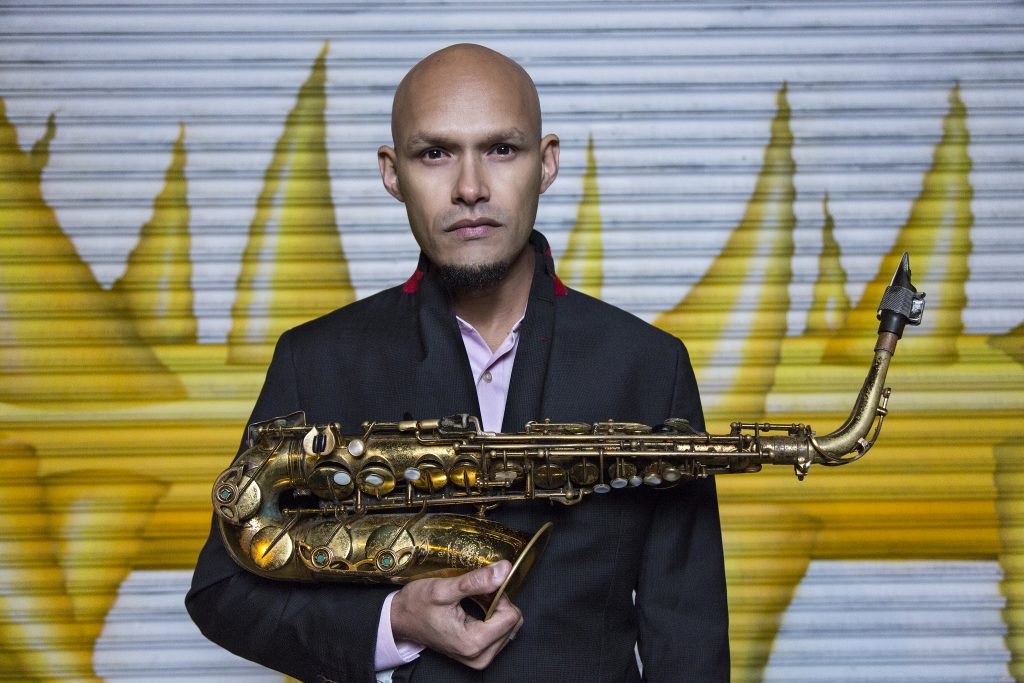 When Hurricane Maria rampaged through Puerto Rico on September 27, 2017, one of the first jazz musicians to rush to the country’s aid was saxophonist Miguel Zenón. On October 8 he organized a benefit concert in Berkeley, California, called “Juntos por Puerto Rico, which featured a host of West Coast jazz luminaries. All proceeds went to Hurricane Maria recovery funds.

Zenón, a Puerto Rican native now based in New York, is a proud believer in the strength and spirit of his birthplace. That dedication is reflected in his music.

A MacArthur “Genius Grant” award winner, Zenón has spent the bulk of his career operating in the zone between modern jazz and traditional Puerto Rican folk music. In the process, he’s yielded fascinating albums that explore themes of Puerto Rican identity and the evolution of jazz. Of particular prominence is his 2014 release, Identities Are Changeable, which fused music and oral history to striking effect. In preparation, Zenón interviewed a group of Puerto Rican natives on topics of ethnicity and self-perception, and later paired the audio from those interviews with bristling, rhythm-activated original compositions.

For his latest album, Yo Soy la Tradición, Zenón performs alongside the Chicago-based string ensemble Spektral Quartet. The concert-length studio recording is scheduled for release on Miel Music on Sept. 21.

On June 16, Zenón is scheduled to perform at the Pittsburgh International Jazz Festival, where he is a Featured Artist. It will be his first time performing at the fest. JAZZIZ spoke with Zenon while the saxophonist was on tour in Basel, Switzerland. In the wide-ranging interview, we discussed his upcoming performance in Pittsburgh, as well as his ongoing efforts to shed light on the music and people of Puerto Rico.

JAZZIZ: Thanks for taking the time out of your busy touring schedule to talk with us, Miguel. What have you been up to lately?

Zenón: Right now I’ve been doing a lot of work with a good friend of mine, Guillermo Klein. Guillermo Klein is a composer from Argentina. I’ve been working with him for about 20 years now. We get together every year to play a little bit. We just played the Village Vanguard [at the end of May]. Now we’re in Basel, Switzerland, to play some concerts over here. We just finished off an album with a new band — sort of an 11-piece mini big-band — with a lot of amazing players. Then we’re going to do a couple more concerts here in Europe. So for me, the last couple weeks have been concentrated on this specific project with Guillermo and his band.

Let’s talk about your new project, Yo Soy La Tradición. I know you’ve written for strings in the past, but this seems to be your first real foray into writing for a chamber ensemble.

Right. It’s definitely the first time that I’ve written for string quartet in this context, meaning no rhythm section — just the strings and me. And it was challenging, of course. But I took my time and made sure that I was writing something that was within my comfort zone, and within their comfort zones, too. Just trying to find things that worked both ways. I’m super happy about how it came out.

Will any of that music be performed at the Pittsburgh International Jazz Fest?

In Pittsburgh I’m going to be playing with my quartet [featuring pianist Luis Perdomo, bassist Hans Glawischnig and drummer Henry Cole], so you’ll be hearing a lot of stuff from my quartet albums.

Have you been to Pittsburgh before? Are you familiar with the scene?

I’ve been to the city, yes, but never to the fest. So I’m really excited about that. I know it’s a great scene.

You’re known for your deep investigations into Puerto Rican folk music. Does the new album continue in the same vein?

Did adding strings open up any new doorways in that investigation?

There’s always something new, I feel. The more I get into it, the more I investigate, the more I know that I don’t really know a lot. (laughs) For this specific project I was looking at traditions from Puerto Rico — most of them are very rural traditions, meaning that they’re concentrated in rural areas, and mostly in the mountainside area of Puerto Rico, as opposed to something that was concentrated in the coastal areas, which is usually very percussive and very African influenced.

The music in the rural areas is more string-based, and the traditions are more connected to Europe and to the creole aspect of Puerto Rico, that sort of in-between of the American, African and European traditions.

So some of those traditions are actually musical traditions, and some of them are not. Some of them are traditions that have to do with religion or religious practices. I looked into them and tried to find a way to filter them into a musical language. I also interviewed a bunch of folks who are super immersed in these type of traditions, and I talked to them about the development of the music and things that I could do. Slowly, I found my way through it.

How did the Spektral Quartet get involved?

The whole thing ended up being written for string quartet kind of by chance. I met these guys from the Spektral Quartet a couple of years ago when I was performing in Chicago. They were recording with somebody else — Julien Labro, this great accordionist who’s based in Canada — and he was recording a piece of mine on his session. He saw that I was in town and asked me to come record it with him. I went in and the whole thing was great.

I was approached a little later by the Hyde Park Jazz Festival about writing something for their fest, something that incorporated musicians from Chicago. I immediately thought of Spektral Quartet.

You know, I look at opportunities like this as a way of walking into a challenge. I’d never done this before, so it was the perfect opportunity. I was being commissioned to write something; I could do whatever I wanted. I thought, Why not try to tackle working with a string quartet? Why not try to find ways to incorporate these ideas of Puerto Rican traditions that I’ve been thinking about for a long time? I just hadn’t found the right vehicle for it until then.

The people of Puerto Rico are still reeling from the effects of Hurricane Maria. How has it reshaped the culture — musical and otherwise?

I’m very much in touch with everything that’s going on there. My whole family’s there. Most of my friends are there. And things are not looking good. I guess it’s pretty obvious if you look at the news. I mean, they now estimate the death toll in Puerto Rico could be between 800 and 8000. They haven’t really figured that out yet. They don’t have access to the records yet. So it’s a disaster. It’s a humanitarian disaster. Like any disaster, it takes a while for it to come back — in every sense.

I have a lot of musician friends; I have a lot of people who were self-employed or they work in culture or the arts, or they own their own businesses. They’re struggling, as are most people there. It’s going to be a while for Puerto Rico to actually be a functional society again. It’s going to require a lot of different things, a lot of best-case scenarios. But I also think that it’s never going to be like it used to be. Puerto Rico’s going to be a different place, and the citizens there and people like me — who don’t live there but are very much connected to everything that’s happening there — we’re just going to have to cope with that new reality.

I think this is a tough pill to swallow, but I could put together a benefit concert every day, and it wouldn’t be enough. This is a major crisis. There has to be a real, substantial change in Puerto Rico and the way things work there.

You’re a true student of Puerto Rico’s history and culture. What have you learned about the people there in the wake of this tragedy?

I’ve been surprised by the resiliency of the people of Puerto Rico. I know a lot of people who had the chance to go when all this happened, to leave and be more comfortable. And they decided to stay, because they decided that they would be more help there than they would in New York or Florida or elsewhere. That tells me that these are people who love their country — in many ways more than they love themselves. They really try to do all they can to help things get better and help it from the ground up.

I have musician friends and artists who are basically going around building houses and fixing roofs, saying “We’re going to grind it out. This is our country. No matter what happens, nothing is going to take it away from us.” For me, that’s the kind of mentality that’s needed, the idea that We’re going to stay here and deal with this together.

For more information on Zenón, visit the saxophonist’s website. To learn more about the Pittsburgh International Jazz Festival, visit the organization’s website.

Miguel Zenón will release Yo Soy la Tradición on September 21 via Miel Music. Stream “Rosario,” the first track of that new recording, via the player below: