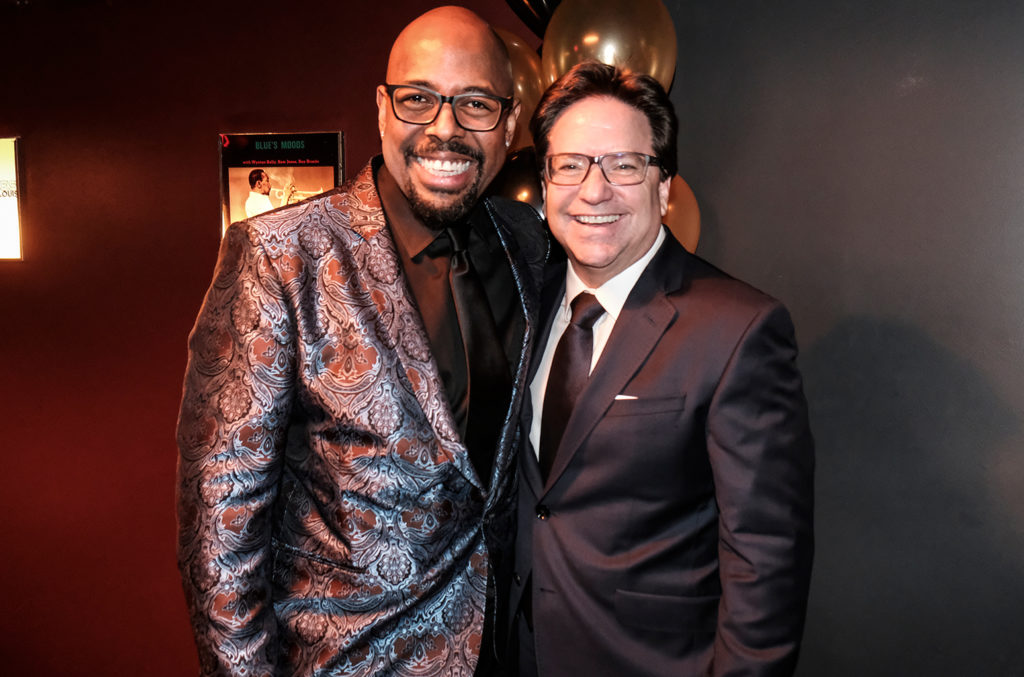 Though just two months in, 2019 is shaping up to be a great year for Mack Avenue Records. Earlier this month, the label scored a major victory at the 61st Grammy Awards when vocalist Cécile McLorin Salvant, a Mack Avenue mainstay, took home the Best Jazz Vocal Album award for her sensational duet project The Window. (Remarkably, it was her third straight win in that category.) Saxophonist Tia Fuller, another pillar in the Mack Avenue roster, was also nominated for an award — for Best Jazz Instrumental Album — for her fifth LP, Diamond Cut. (Even more remarkably, Fuller was the second-ever woman to be nominated in that category.)

The label is also still buzzing from its recent release of Gary Burton’s Take Another Look, a deluxe vinyl box set released last November that comprises select tracks from the vibraphone legend’s 50-year career. Around the same time, the label announced that it would be launching a new imprint, Brother Mister Records, that would be overseen by bass icon Christian McBride. His first album on the label, Christian McBride’s New Jawn, was a chart-topper in last year’s jazz polls.

But the biggest thing to happen to Mack Avenue Records in 2019 is that it will turn 20 years old. That’s an exceptional feat for any company, but in the music industry, where institutions can come and go like one-hit wonders, it’s a glowing mark of distinction. The label has its origins in owner Gretchen Valade, a Detroit business leader whose passion for jazz runs deep and whose support for the artists who make it is boundless. But much of Mack Avenue’s continued success can be attributed to label president Denny Stilwell, whose supervision in the areas of artist acquisition and business development has helped build the label into a premier destination for jazz, R&B, gospel, and more.

JAZZIZ recently spoke with Stilwell by phone from Los Angeles about the significance of the label’s 20th anniversary and what it means for Mack Avenue’s future (and the future of music labels everywhere). Below are excerpts of the conversation.

How long have you been involved with Mack Avenue?

I think since the third release, which was in 2002.

And how would you describe your role at the label?

The focus of my role has been largely on A&R [artists and repertoire] and acquisitions. I help to build the roster out. I think, going forward, my responsibilities will definitely start to evolve, both out front and behind the scenes, because we have a fantastic head of A&R right now in Will Wakefield and Al Pryor. The three of us have worked together for many years to build the Mack Avenue roster into what it is today.

[Another big part of my job] is answering questions: How are we running internally, our processes and systems? And do they support our mission? And then, because our most valued partners are always the artists, how are we ensuring that they remain the focus of our attention?

What are some of the most important things you learned from Mack Avenue founder Gretchen Valade, who brought you into the label?

Anyone who knows Gretchen Valade knows that she has a very artist-focused philosophy. Equal to that is her insistence on quality. Now, that’s kind of a vague term, because everyone says they want to focus on quality, but she’s very intentional about it, from the look and feel of our packaging to the sound quality of our albums.

Knowing that there’s a commitment to the music, and that a mark of quality is affiliated with our brand, is fantastic. It’s part of who we are, and a cornerstone of who we want to be. And it governs everything we do, from how we approach individual projects to how we envision entire careers for developing artists. That all came from Gretchen.

I’m always answering questions: How are we running internally, our processes and systems? And do they support our mission? And then, because our most valued partners are always the artists, how are we ensuring that they remain the focus of our attention?

Mack Avenue has always shown a commitment to nurturing young, up-and-coming artists. Why is that so important to the label? And what kind of services do you provide for new artists?

It’s been a stated intention for us to honor veteran artists and legacy artists, but at the same time, we want to keep an eye on where the future of this music is heading. In terms of developing artists, there’s a variety of ways we work with young musicians, but it starts with making a commitment. You’ll find very few projects in the Mack Avenue catalog that are just one-offs. Most of our catalog is made up of multiple projects from a single artist or group. In that sense, we look at the entire arc of the artist’s career over the course of three or four albums — or more, in many cases. There’s investment upfront — and not just monetary. We’re really looking at the broader picture.

As the music business has struggled, a lot of companies have had to move away from highlighting lesser-known artists. They’ve had to look more short term. We tend to make sure that we’re able to look past the length of our arms and try not to make decisions that are short-sighted.

Obviously, the promotion that we’re able to do to help a developing artist rise above the noise of all the other releases coming out every month is a distinct advantage. And at this point in our business’s development, we have great relationships throughout the industry, and we can help further their careers by providing those resources.

Being the president of a major jazz label, you have a unique vantage point on the genre. Where do you see this music heading?

I’ll say this: I am constantly blown away by the talent of the “next generation” of artists, the younger players that are just coming out, some still in their teens, many in their early 20s. I’m amazed at their sophistication, how they have absorbed the past but have found a way to make it their own. I’m thinking about musicians like Cécile McLorin Salvant, Christian Sands, even newer artists like Connie Han or Veronica Swift. The ability to add their voice — which is unique to their generation to their own past — and still understand and absorb the history of the music is amazing to me.

In this new music consumption environment that we’re in, young people have so much more access to music than I did growing up. There’s so much more exposure, and the influences on the artists are much greater. We see, and we’ve been seeing, a collision of different genres. And what comes out of that collision is oftentimes magical. I love seeing that, and I think we’re going to see more of that, and for the betterment of this music.

As the music business has struggled, a lot of companies have had to move away from highlighting lesser-known artists. They’ve had to look more short term. We tend to make sure that we’re able to look past the length of our arms and try not to make decisions that are short-sighted.

The future of jazz will also bring changes in the way we listen to music. How has Mack Avenue adapted to the streaming culture we’re in now?

Data is a big word, but it’s very real for us. We have access to more information than we’ve ever had before, so being able to look at that and make it part of your decision — be it a business or marketing or A&R decision — is one way that we’ve been adapting over the last several years. It will continue to inform us, because the market is a moving target.

The last 10 years, everyone in this industry has been experimenting, trying to figure out how the market is going to turn and shift. Obviously, there’s a big shift now toward streaming, and we’re very much focused on that. Interestingly, there was a counterbalance to this, too. Because at the same time streaming is taking a foothold, we’re also consistently seeing more vinyl go out the door.

You’ve also put out some phenomenal Latin jazz releases as of late, anchored by an impressive roster of Cuban artists: Chucho Valdés, Alfredo Rodriguez, Harold López-Nussa and Pedrito Martinez. As we talk about the future of jazz, I can’t help but think that Latin artists are going to play a major role.

I agree. A couple of years ago, when we were looking at the Mack Avenue roster, we realized that we didn’t really have a Latin jazz component. It wasn’t part of our personality at that time. Looking at covering a broader spectrum of jazz — whether it’s avant-garde or vocal jazz or mainstream jazz — one thing that was missing was the Latin element.

Essentially, it was a combination of opportunities that came our way and us keeping our ears to the ground, asking questions about certain artists. Alfredo came our way, and he’s just fantastic. Shortly after that, Harold came to our attention. They’re two fantastically talented artists, both pianists but approaching the piano in different ways. And then being able to work with Chucho Valdés is a fantastic development for us. We’re thrilled.

I am constantly blown away by the talent of the “next generation” of artists, the younger players that are just coming out, some still in their teens, many in their early 20s. I’m amazed at their sophistication, how they have absorbed the past but have found a way to make it their own.

What are you doing to ensure that Mack Avenue stays around for another 20 years?

One of the biggest things we’re doing is looking out beyond the borders of the U.S., toward what’s happening internationally. Over the last 10 years, we’ve paid attention to what’s happening overseas, and that’s worked out very well for us. We very much feel like we have a sense of what’s happening in jazz and in music in other places around the world. I think that has been paying off for us as we continue to look at our business globally.

Looking back at your career at Mack Avenue from the 20-year mark, what moments jump out at you?

The moments that mean the most to me are when an artist has commented on how they feel like they’re part of the Mack Avenue family — whether they send me an email or a handwritten note. Those stick with me, because it means that the artist feels supported, and that their creativity was fostered. When I get those kinds of messages, they stay with me for a very long time.