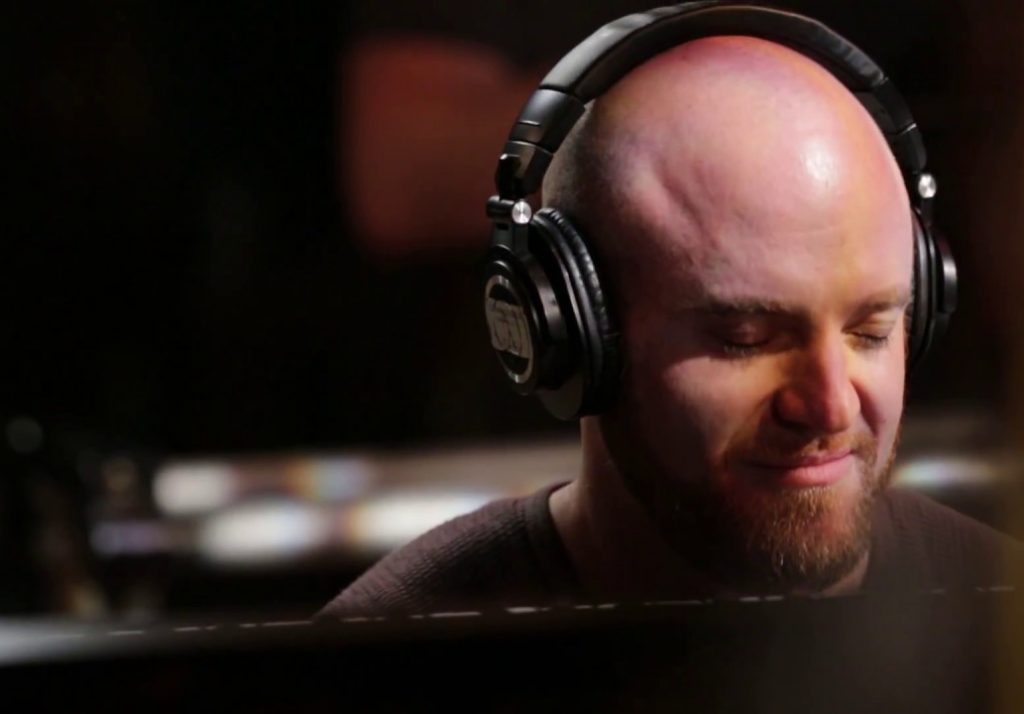 Keyboardist Lao Tizer is no stranger to reinvention. Throughout his nearly two-decade professional career, the Colorado-born, Los Angeles-based musician has charted a course through various styles and genres, beginning with his 2000 adult contemporary debut, Golden Soul, and arriving at his latest project, the fusion-oriented CD+DVD combo, Songs from the Swinghouse.

Released March 16, the new album is in many ways an intersection of Tizer’s musical interests, which range from classic rock to traditional jazz to world music to funk. But because of the added visual component, Tizer also frames the project as a bold new venture into the realm of brand outreach and social media marketing.

“We live in a more visual world than ever with social media,” said Tizer during a phone interview with JAZZIZ. “So how, as a musician, are you going to increase your brand and reach outside of just touring? Well, video is the way.” 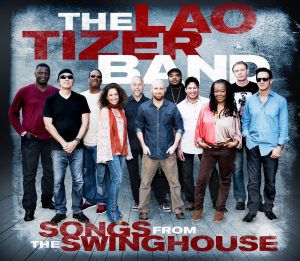 Songs from the Swinghouse pairs its 11 scintillating tracks with live-in-the-studio DVD footage documenting the making of each song. To produce the video, Tizer joined forces with director Andy LaViolette, known for his work with social media-savvy bands like Snarky Puppy and Banda Magda. The director, a graduate of the University of North Texas jazz program, brings a keen eye to the proceedings and demonstrates a remarkable ability to capture the visual side of music-making with penetrating clarity. “He really understands the music,” said Tizer. “That’s why he’s so good at directing it.”

But LaViolette wasn’t the only newcomer to Tizer’s longstanding group. The album also features vocalist Tita Hutchison, a dynamic and versatile singer who accompanies the band on three brilliantly re-imagined cover songs: Led Zeppelin’s “Ramble On,” U2’s “Pride (In the Name of Love)” and Cat Stevens’ “Sad Lisa.” It’s worth noting that Hutchison is the first vocalist ever to record with the Lao Tizer Band, and in doing so, she joins the ensemble at its largest iteration ever, comprising up to 15 musicians at various points throughout the disc.

Saxophonist Eric Marienthal and violinist Karen Briggs are featured soloists throughout, and they find themselves in good company with a core band that includes Tizer on keys; Chieli Minucci and Jeff Marshall on guitar; Gene Coye on drums; Munyungo Jackson on percussion; Ric Fierabracci and Cheikh N’Doye on bass; and Steve Nieves on saxophone.

Conceptually, Tizer considers the CD+DVD combo a coming-together of his stylistic influences, as well as a musical recollection of his journey to the present moment. He seems pleasantly surprised with the project’s ultimate destination. “It’s interesting when you look back on the path that we take and the things that feed our musical muse,” he said in a phone interview with JAZZIZ. “Where we end up falling with our own music can be very exciting.”

Below is an edited transcript of our conversation, in which we discuss the new album, his musical upbringing and the “massive undertaking” that is film production.

Tell us more about your musical background. I hear it’s quite eclectic.

It was. I should preface this by saying that my parents were hippies. When I was 5, we were living on a property in southern Colorado, about seven miles outside a small town called Salida, which I think at that time had a population of about 5,000 or 10,000 people. My parents got a piano for my sister, and for whatever reason, I was the one that took the most interest in it. I didn’t know anything about music. But I was taken by it. There were times where I would just sit and improvise on it for an hour.

I had also been exposed to a really diverse array of music as a kid because my parents had a huge LP collection of a lot of really eclectic world music. You know, Ravi Shankar and Japanese shakuhachi music, the music of the Sufis, all kinds of interesting stuff. It’s ironic, really, but my dad’s not even into jazz, never connected with it, never listened to it. He was mostly into classical, and of course the music of his generation.

So what was it that first pulled you toward jazz?

I still remember it clear as day. I was 16, and the album that really opened my eyes was Miles Davis and Quincy Jones’ Live at Montreux. It just hit me, like how amazing this stuff is. And then before you know it I was listening to Kind of Blue. I loved Wynton Kelly and Bill Evans. And then interestingly enough I started listening to Keith Jarrett because my parents were into him. They had his recordings of him playing The Movements by George Gurdjieff. It’s kind of like a yoga-type exercise that my parents were into.

So anyway, that was the tip of the iceberg. Then I moved to L.A. and I started studying with a great pianist here named Terry Trotter, who’s a pretty legendary cat and also taught a lot of the real heavyweight guys as well. Terry was the one that really started to open my eyes and ears to the jazz canon and standards.

You also have an undeniable pop sensibility in your style. Where’d that come from?

I mean, I’ve always liked very melodic, accessible music. So I try to replicate that in my own work. It’s a formula that the Pat Metheny Group did a lot, combining really accessible, really memorable and melodic writing with a lot of room for improvisation and stretching. I subscribe to a philosophy that as long as something is melodic and grooving, then any audience that has somewhat open ears will connect with it. Once you draw them in, then you can go a lot of places.

I also believe in breaking down boundaries of genre a little bit. Because what I’ve found is that most jazz listeners respond to music that is well played and full of energy, that is entertaining and takes them somewhere, regardless of genre.

This album marks your first time working with a vocalist. How did you find Tita Hutchison?

She was kind of the last piece of the puzzle, actually. I was working with our manager at that time and he had a very specific vision for our cover tunes, because if you’re going to do a Led Zeppelin cover, you have to have someone that’s going to be believable. But that person also has to sing with delicacy, especially for a tune like “Sad Lisa.” And it’s funny because I had known Tita for quite a while, but her name didn’t come to mind right away. We had auditioned six to eight singers, and we weren’t finding the right one.

We were literally a few weeks out from the session and then I was like “Oh yeah, Tita!” She came over and she nailed it. And she’s the perfect fit for the group, too. She was super positive and her energy is totally chill. We really lucked out.

How’d you end up settling on these three cover tunes?

I like to think outside the box in the jazz realm. And if you’re talking about contemporary jazz, it’s more likely that people will do covers of Marvin Gaye or Motown or something that’s more R&B. Nobody ever touches on Zeppelin’s stuff. And you’re talking about maybe the single most iconic rock group of all time.

As for U2, I’m the youngest of four kids. And my older brother was listening to them a lot when he was in high school, and I was getting into whatever he was getting into: Joshua Tree, Live at Red Rocks, all that stuff.

The “Sad Lisa” cover came from the investors who backed the record. Their daughter had passed away one month shy of her 30th birthday. And they wanted me to dedicate a song to her on the record. I had never met her, but I was quite close with them, and I told them that I didn’t know what to write because I didn’t know her personally. I said, “Why don’t you tell me some tunes that were special to her?” And they gave me a list of tunes, and right away I knew it was going to be “Sad Lisa” by Cat Stevens. Tea for the Tillerman was right up my alley. I knew we could really take that and make it our own.

Eric Marienthal is another featured soloist. How did you two first cross paths?

So I met Eric via the bassist Cheikh N’Doye. Cheikh had come out to L.A. to do a show of his own music. I met Eric on that gig and asked if he’d be interested in playing with us sometime. I gave him a CD, and then I think he first played with us was at the end of 2014. By the time the sessions came around, Eric had done a pretty good number of shows with us. He had a great feel for the music. He’s also a class act and a monster musician in every way, as good as they come. I’m honored to be able to work with him, as well as all these other amazing players involved.

Was it always your plan to record a DVD alongside the CD?

It was absolutely the plan from day one. I wanted to do something that was going to give us a calling card. I knew how good the group was and I know what we were capable of, and all I wanted to do was get that in front of people’s eyes. So a video was the obvious approach.

Did you have any hand in the direction and editing? Or was it all Andy?

Andy would do his first cut of the videos and then I would just give him feedback. But like I said, he has such a good musical ear and understands music so well. He just naturally edits so appropriately for the song. But there was a lot of compromise between the director and the recording engineer. Because the recording engineer, Paul Wickliffe, wanted as much isolation as possible, right? And the video guy wants as much inclusion as possible. But, you know, if you have a horn section and acoustic piano in the room together, that’s generally a problem. (laughs)

That said, it’s a really, really beautiful sounding record. And to do that with some constraints as far as isolation definitely is a challenge. But it came out great.

Did you find that making the video improved your audience reach?

Absolutely. We’re seeing significant growth on every level. Now, had we released this project seven years ago, its impact might have been even bigger right out of the gate, because it would have been a bit more of a novelty. But I think it’s absolutely still a necessity. People live in a more virtual world than ever with social media. Everybody’s watching videos on their phone, whether it be on Facebook or Instagram or YouTube. And if you’re prepared for the literally massive undertaking that it takes to make a live video the way we did it, then I say go for it. But it’s definitely not for the faint of heart, that’s for sure.

Any new projects on the horizon?

I’m kind of tempted to do a live performance recording and video, maybe two or three nights at the same venue and then turn that into another album and film. I don’t know quite yet, but wheels are turning.

The Lao Tizer Band will be performing at the Huntington Summer Arts Festival Jazz Weekend in Huntington, New York, on July 20. Later appearances include the Telluride Jazz Festival in Telluride, Colorado, on Aug. 3-5  and the Clearwater Jazz Holiday in Clearwater, Florida, on Oct. 20. For a complete touring schedule, and to order a copy of Tizer’s new album, visit his website.