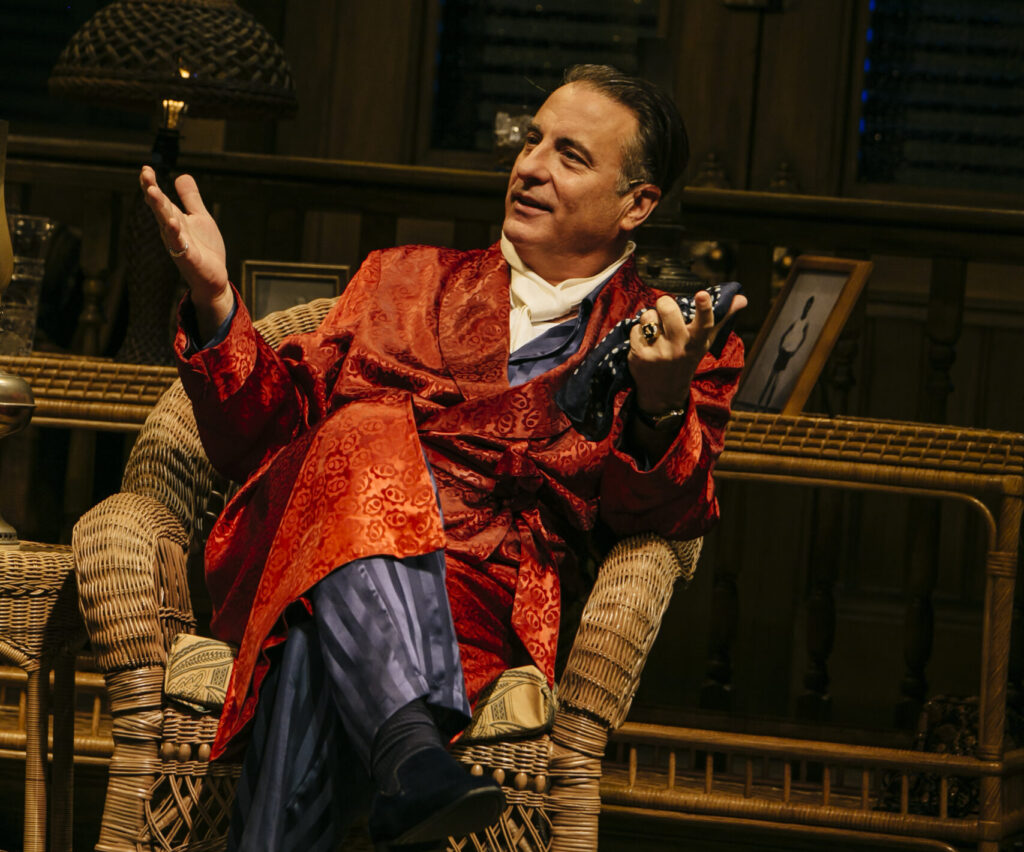 Actor Andy Garcia is one of the more bankable names in motion pictures today.  He is currently involved with two movies ready for release, four in post-production, with one television series being filmed, and a TV show and a movie project in pre-production.  How is it, then, that he’s found the time to star in a stage production of the Humphrey Bogart classic, Key Largo?  “This is something I’ve had in mind to do for many years,” he says, by phone, in time he’s stolen out of his busy schedule.  “The Geffen Playhouse in Westwood offered to let me stage a play, and I didn’t hesitate to use this opportunity.”

Key Largo (1948), one of the great Warner Bros. Bogart features, is a moody film noir.  Set in the Florida Keys during hurricane season, it’s the story of a cynical World War II vet who lands in a claustrophobic hotel that’s being held hostage by gangster Johnny Rocco (indelibly etched by Edward G. Robinson) and his henchmen.  The Geffen’s set, lighting and sound work together brilliantly to present a stately old building battered by the raging storm outside. 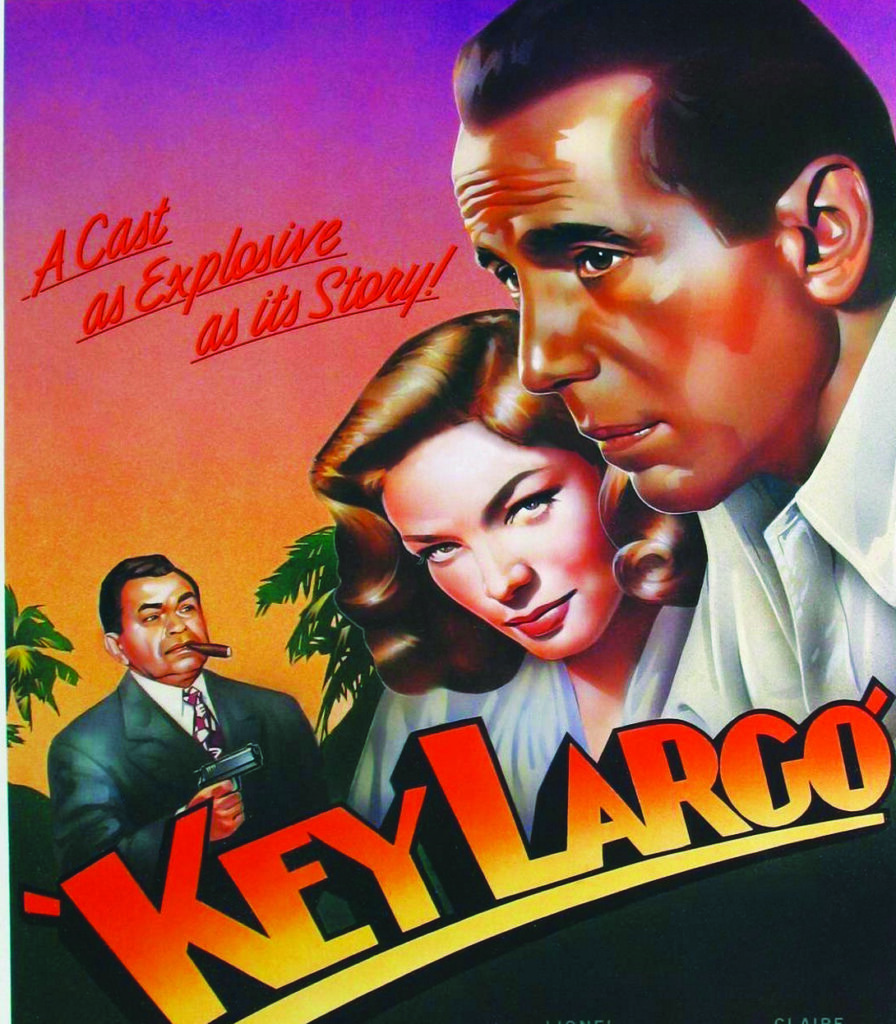 Adding to the atmosphere is the play’s soundtrack, composed and played by trumpeter Arturo Sandoval.  For Garcia, Sandoval was a natural choice for the project.  They first met briefly in Miami, at a birthday party for Cuban bass and composition legend Israel ‘Cachao’ Lopez.  Garcia championed Cachao, whose influential compositions hadn’t translated into meaningful recognition.  He languished in obscurity, and Garcia used his celebrity to bring Lopez to the attention of the national and international jazz audiences.  A first-class band was built around Lopez, and he headed for the big stages.  On the bandstand, Garcia handled short introductions, and played congas in the band—but always deferring to Lopez.  “Andy was so good to Cachao,” affirms Sandoval, from his home in Pasadena. “He rescued him.  Cachao wasn’t doing anything in Miami, and Andy’s name took him to all of the festivals and concert halls.”

“Cachao was such an influential composer,” Garcia points out, “and so many people took his music and adapted it for their own songs that it was truly a shame.  So, when The Man Up Above gave me the chance, it was an honor to be able to help Cachao.”

The Garcia-Sandoval relationship was cemented when the actor portrayed the trumpeter in For Love or Country, in 2000.  That was Sandoval’s own story–of his life in Castro’s Cuba, his relationship with Dizzy Gillespie, and Sandoval’s escape to the west.  “We reconnected on the movie,” Sandoval says, “and we spent a lot of time together.  We’ve been close ever since.  Andy is a real music lover; and he played pretty good percussion with Cachao.”  Sandoval has since scored some films for Garcia, as well as the recent movies Mule, and the forthcoming Richard Jewell–both by Clint Eastwood.

Each by his own route, they came to the movie version of Key Largo.  “I know that movie very well,” says Garcia, whose family fled Castro’s Cuba for Florida in 1961.  “I grew up in those Keys, and I know Key Largo—that’s why I’m so attracted to the temperature of the play.”

Sandoval knew the movie independent of his collaborator.  “I watched Key Largo many times over the years — long before I met Andy.  It’s a classic movie, and the cast is first-class: Humphrey Bogart, Edward G. Robinson, and Lauren Bacall.  I lived in Miami for 20 years, and I went to Key West and Key Largo many times.  And I saw how true to the actual Florida weather the story is.  It’s absolutely true.”

Though he’s played some hard-edged characters in his work, Garcia has seldom been cast as an irredeemable villain.  In Johnny Rocco, Garcia has a ruthless psychopath to sink his teeth into.  In the story, Rocco has been in prison, and then deported; he’s sneaking into Florida to pick up a heroin shipment.  His plans are to take it to pre-revolutionary Cuba and make a fortune with it.  Along the way, he plans to knock off the current underworld kingpins and reclaim his rightful place as crime czar.  And he’ll crush anything or anyone that stands in his way.  “Rocco is a malignant narcissist,” Garcia flatly states.  “He’s a bully, a predator, and a spoiled brat.  He thinks he’s king of the world, but we find out he’s scared to death of hurricanes.”  In the new treatment, Rocco is the story’s protagonist, with the Bogart character a largely passive figure.  It’s an outsized role, and Garcia’s performance is nothing short of a tour de force.

The weather as Rocco’s Achilles heel is an important element to the new treatment of Key Largo, which was originally a play by Maxwell Anderson.  Garcia collaborated with writer Jeffrey Hatcher for a new play script.  In their treatment, the threatening storm is practically another character.  And Sandoval’s pre-recorded cues move through the intense action on the constricted set like an aural apparition.  They are languid and melancholy.  He’s quick to credit his engineer, Dan Higgins, with help for the recordings.  “He’s a Berklee grad and a jazz guitarist,” Sandoval offers, “and we’ve worked together for eleven years.  He’s really good at giving my music some special edges.”

Max Steiner, one of the great Hollywood film composers, handled the soundtrack to Key Largo.  Did Sandoval take any inspiration from his score?  “No,” the trumpeter says firmly.  “I just tried to stay true to the emotion of the play at the moment the cue comes in.  It’s not a musical play, so the cues are atmospheric.  I played all of the music myself; on trumpet and keyboards.  Then, at the end of the play, I play an instrumental song.”  That piece is an elegy, full of barely restrained emotion—both in the chord changes and harmonies—and the plaintive trumpet lament.  Think of Uan Rasey’s tear-stained trumpet solo for Jerry Goldsmith’s score of Chinatown.  The instrumental virtuosity and the emotional impact are similar.

At the time of this writing, Key Largo (which opens November 14) was in the preview stage.  It was the product of an intense month’s work, three of which led up to preview week.  Garcia has nothing but gratitude to producer Frank Mancuso, co-adapter Jeffrey Hatcher, director Doug Hughes, scenic designer John Lee Beatty, and lighting director Peter Kaczorowski among them.  “This play came together very quickly,” says Garcia.  “Over the years I’ve seen how your own personal projects can run into roadblocks, and you get used to hearing no a lot.  Key Largo has been a dream because everything just clicked in so well, and I’m grateful to all the talented people who made this happen.”