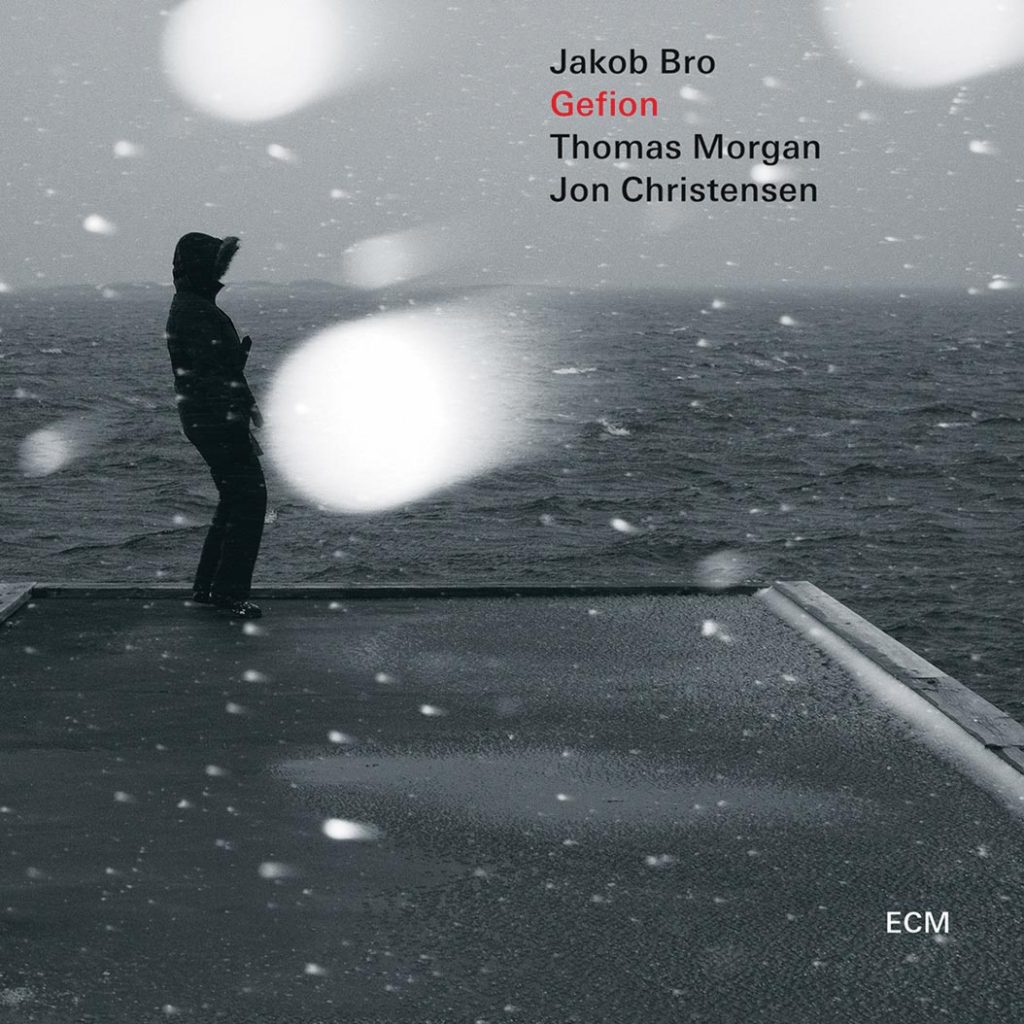 Danish guitarist Jakob Bro clearly belongs to the introspective, post-Bill-Frisell cadre of electric guitarists. Listeners may be tempted to point out Frisell connections and comparisons, from the floating quality of his sound and touch on the instrument to Bro’s role in bands led by time-melting drummer Paul Motian, with whom Frisell had a long and fruitful relationship. But Bro has been developing a fascinating voice of his own. And he reaches new heights on his quietly powerful ECM debut as a leader, which finds him in empathetic connection with bassist Thomas Morgan and ECM mainstay Jon Christensen on drums.

Gefion, named for a Norse goddess linked with prophecy and harvest, is meditative and mesmerizing, working its sonic approaches and musical strategies to painterly and poetic ends. The album literally begins and ends with ethereal washes of sound. Bro crafts an impressionistic sound cloud on the introduction to the opening title track, which unfolds as a folkish melody in Motianesque time, and he closes the album with the dreamy and aptly titled “Ending.” On the latter, a 6/4 rhythmic motif — and one of the rare steady pulses to be found on the record — stops abruptly, as the track dissolves into into a simmering atmosphere of pinging harmonics and delay-dusted guitar-tone haze.

Bro’s writing also beguiles. “Copenhagen” plays like a wistful ode to the city, while “Oktober” is a dusky waltz. And the solo-guitar piece “Lyskaster” conjures a character that’s both fragile and assured in its musical intent. Morgan sometimes provides the anchoring voice in the trio, crafting the martial bass lines on “And They All Came Marching Out of the Woods,” for instance. Meanwhile, veteran Norwegian drum poet Christensen — who has strongly influenced Bro’s playing — accesses his innate virtues as a colorist, rather than as a timekeeper in any conventional sense. Then there is Bro, in the center and on top, using delay and spacious reverb as expressive tools, coating the spaces between his sparing, clean-toned note choices and well-placed dissonances.

Gefion treads lightly, in no hurry to emphasize solo flights over the integrity of the musical whole. The album impresses on its own terms, via enigma and economy. —Josef Woodard