Journey is an apt title for Ivan Baryshnikov’s new album. The 10-track project is a chronicling of the tenor saxophonist’s jazz odyssey from his native Moscow to The Netherlands, where he pursued a college education in music, onward to New York City, where he recorded this album as part of an exchange program with the Manhattan School of Music. All that geographic variability makes for a heady concept, but the album’s strong yet tensile compositions stand up to the thematic weight. Journey is divided into three sections — one each for the countries Baryshnikov has called home — and each section is capped by a “transition song” that signifies the moment of passage between locations. 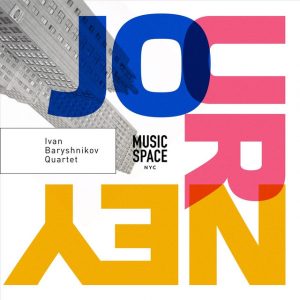 The resulting music is highly personal, with tracks that deal with the uncertainty of being a transplant in two countries, but more importantly, it’s music that reveals a player developing mastery over his own sound. “Beehive,” from the Moscow section, is a taut, action-packed number in the hard-bop vein that puts Baryshnikov’s muscular yet cerebral style in the spotlight. The saxophonist weaves some seriously intricate lines into the song’s complex harmony, but the tune also packs plenty of groove and melodicism.

Like what you hear? Buy this album on iTunes or Amazon today.