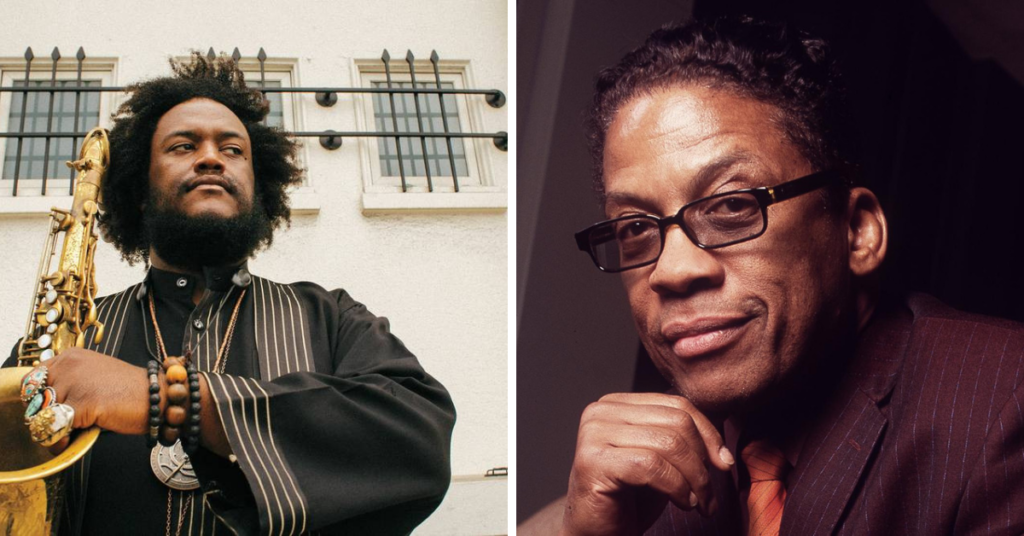 Music fans, brace yourselves. Two of the biggest stars in jazz are about to collide — and in the best possible way. Herbie Hancock and Kamasi Washington have announced a series of tour dates across the U.S. and Canada, each bringing their full band and performing two distinct sets.

The tour begins July 30 in Vienna, Virginia, with subsequent stops in Philadelphia, Toronto, Detroit, Chicago, Denver, Seattle and Berkeley, California.  Tickets go on sale to the public this Friday, April 12. (Coincidentally, that happens to be Hancock’s 79th birthday.)

An all-star band featuring Vinnie Colaiuta on drums, James Genus on bass, Lionel Loueke on guitar and multi-instrumentalist Terrace Martin will accompany Hancock on the road for the duration of the dates.  Martin’s presence, especially, is a meaningful one. The saxophonist has been collaborating with Hancock on a new album for the past several years, and during the tour, fans will finally be treated to a taste of Hancock’s highly anticipated new project.

Pianist, keyboardist, and composer Herbie Hancock is one of the all-time jazz greats. Born in Chicago, Illinois, in 1940, he began studying piano at the age of 7 and became interested in jazz during high school. In his college years, he was torn between a career in engineering and his love of music. Eventually opting for the latter, he somehow managed to integrate his interest in electronics, which he gradually included in his constantly evolving music styles. Known as a jazz innovator, Hancock was one of the first jazz musicians to integrate synthesizers and funk elements in his compositions and continues to experiment with various styles and genres to this day. (We recently celebrate his legacy with a list of his 10 best albums.)

Since the 2018 release of Heaven and Earth and its counterpart The Choice, Washington has toured the world over with sold-out shows in North America and Europe, including New York’s Apollo Theater and London’s Brixton Academy. Washington recently debuted his short film As Told To G/D Thyself which originally premiered at the 2019 Sundance Film Festival.

Washington is a multi-instrumentalist and producer born and raised in Los Angeles. Forming his first band, the Young Jazz Giants, with Stephen “Thundercat” Bruner, Ronald Bruner, Jr. and Cameron Graves in high school, Washington went on to study ethnomusicology at UCLA and play with Snoop Dogg, Raphael Saadiq and more. His debut album, The Epic, was released in 2015 to critical acclaim, embraced as one of the best of the year and awarded the inaugural American Music Prize. Heaven and Earth follows The Epic as well as Washington’s 2017 EP Harmony of Difference, an exploration of the musical concept of counterpoint that debuted as an original work for the 2017 Whitney Museum of Art Biennial.

See below for the complete list of tour dates:

Additional dates to be announced shortly. Check back with JAZZIZ to learn more.