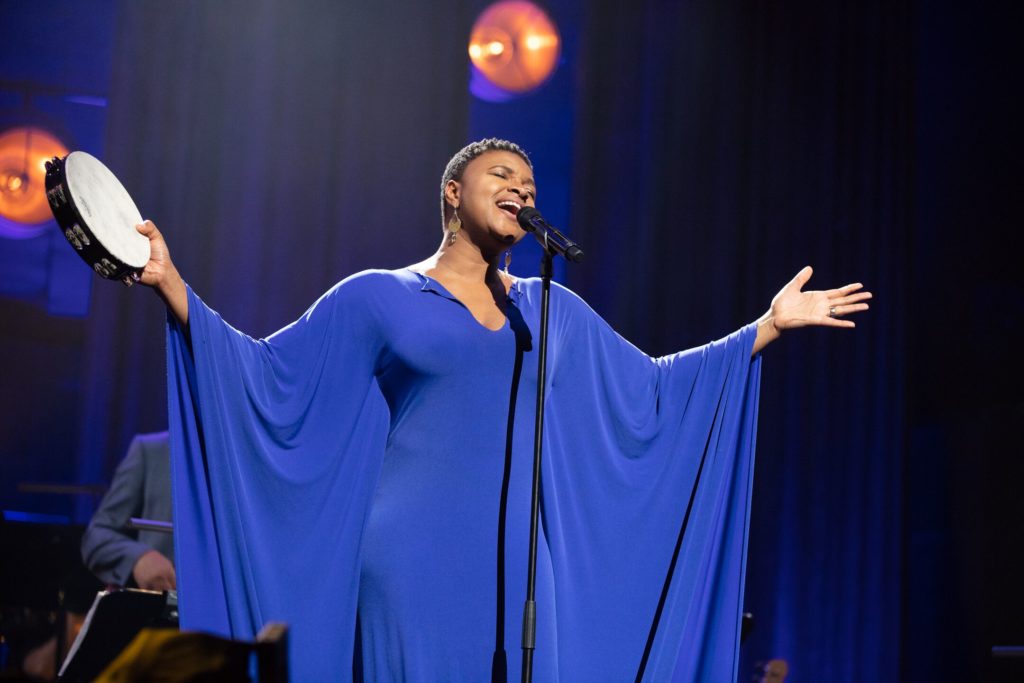 Herbie Hancock, UNESCO Goodwill Ambassador and the chairman of the newly named Herbie Hancock Institute of Jazz, had a message for the thousands of spectators on hand at the Hamer Auditorium in Melbourne, Australia, on April 30, as well as for the millions of fans watching him online via live web stream: “Jazz,” he said, “is the universal language of peace.”

The message had been conveyed in various forms throughout the night, driving home a central tenet of International Jazz Day, the UNESCO-sanctioned day of observance that had occasioned the night’s gathering. Celebrated every year on April 30 and commemorated in more than 190 countries around the world, International Jazz Day was created to highlight jazz and its diplomatic role of uniting people in all corners of the globe. Though its reach now spans the world, it culminates every year in an All-Star Global Concert that takes place in a specific locale. This year’s home city of Melbourne came after previous editions in St. Petersburg, Russia; Paris, France; Washington D.C.; Havana, Cuba; and other points international.

More than in past years, the 2019 concert in Melbourne took on a deeper socio-political significance, as it happened to coincide with another UNESCO-sanctioned observance: the International Year of Indigenous Languages. In raising awareness of the consequences of the endangerment of Indigenous languages across the world, this initiative seeks to establish a link between language, development, peace and reconciliation. That jazz may be counted among those peace-preserving languages is one of International Jazz Day’s ideological pillars. It’s also the philosophical underpinning of All-Star Global Concert’s musical programming.

Musically, the tone of cross-cultural exchange was set from the concert’s very beginning, as International Jazz Day co-artistic director James Morrison, a trumpeter and one of Australia’s most visible jazz figures, appeared on stage alongside William Barton, a respected master of the didgeridoo and an elder of the Aboriginal  Wannyi, Lardil and Kalkadunga tribes. Their duet, performed without accompaniment and with lights dimmed, felt at once like an ancient incantation and a contemporary Milesian improvisation, full of the kind of soul-stirring drones, whispered asides, guttural moans and rippling lines that tend to conjure spirits.

In a masterclass prior to the night’s performance, one of many held during the three-day leadup to the All-Star concert, Morrison and Barton emphasized a point that had implications both musical and unavoidably diplomatic, that true collaboration — in music as in politics — necessitates more than just talking. “It only works if we keep listening,” said Morrison.

Putting various jazz languages into conversation with each other has always been a central tenet of International Jazz Day, and the bulk of that responsibility falls to musical director John Beasley, who could be seen at points throughout the night lending his hand as a supervisor and conductor (as well as occasional tambourine player). His program — which packed nearly 40 performances and intermediary remarks into two hours — struck a well-calibrated balance between communalism and individuality, making room for a plurality of voices while preserving individual dialect.

The concert’s vocalists expressed that point to its fullest, with Jane Monheit swinging with her trademark coy confidence on “East of the Sun,” backed by an international ensemble that included Antonio Sanchez on drums, Ben Williams on bass and Austrian artists Mat Jodrell on trumpet, Paul Grabowsky on piano and James Muller on guitar. Later on, jazz’s eternal hepcat Kurt Elling appeared for a performance of “Did You Call Her Today?,” ratcheting up the hipness with a long vocalese solo that found exhilarating points of interaction with pianist Eric Reed.

Ledisi, one of the night’s standout stars, called into dialogue two closely related musical languages — jazz and R&B — for a poignant reading of Otis Redding’s “Try A Little Tenderness,” with organist Joey DeFrancesco adding a warm and soulful glow. Somi, meanwhile, delivered a powerful artistic statement during a performance of her original song “Lady Revisited,” whose message of global female empowerment touched upon International Jazz Day’s explicit purpose of “helping underserved people around the world.”

And Lizz Wright, a jazz vocalist with gospel bona fides, buoyed the audience twice over with a performance of “Seems I’m Never Tired of Loving You” and “Singing In My Soul,” both of which carried messages of optimism and perseverance while underscoring the common spirituality at the core of the world’s musical cultures.

Still, no other piece compressed more musical idioms into a single conversation than Morrison and Barton’s mid-set performance of “Melody in Esfahan,” a traditional Persian tune that featured an ensemble true to International Jazz Day’s name: Cievash Arian, from Iran, on komanche; Aditya Kalyanpur, from India, on tablas; A Bu, from China, on piano; and Antonio Hart, from America, on soprano saxophone. (Americans Brian Blade and Ben Williams filled the drum and bass roles, while Australian James Muller held down the guitar chair.) The song — shifting gracefully between gentle, sloping gestures and high-speed swirling lines — felt at once universal and specific, allowing the musicians to bend its harmony and melody into whatever words and syllables best suited their individual message.

As is its tradition, the concert came to a close with a group performance of John Lennon’s “Imagine,” a song that, said Hancock, exemplifies the tearing down of the “imaginary boundaries that stand in our way.”

“John Lennon’s revolutionary and beloved poem offers us hope for a peaceful and just world,” said Hancock, as the International Jazz Day all-stars reconvened on the stage. What followed was a riveting performance of a timeless peace anthem that in many ways served as the perfect summation of the night’s festivities, beginning with a slow meditation, then erupting into a joyous celebration of the world’s musical traditions. In a multitude of voices, each one drew strength from the other.