There’s something damned, tragic, passionate and even beautiful about the Frank Sinatra and Ava Gardner love story – something that makes it stand out among all other memorable Hollywood romances. The two first met in the early ’40s on the MGM lot. Sinatra, already a star crooner, limited himself to simply admiring the young starlet-in-the-making and her trademark big green eyes from afar. Gardner, on the other hand, immediately found him to be “conceited, arrogant and overpowering,” as a friend would later report.

They met again in 1948 and began to spend a lot of time together. Gardner was 23 but had already divorced twice (first from Mickey Rooney while in her teens, second from bandleader Artie Shaw). Sinatra, on the other hand, had been married to Nancy Barbato since 1939 and they had had three children together but with fame came many women who made themselves readily available to him and, from this point on, it was no secret that he too had made himself available to them. One of his most notable affairs had been with actress Lana Turner (who had also previously been married to Shaw).

Gardner and Sinatra seemed to love many of the same things – especially jazz, alcohol and sex. They also shared a common flaw: they were both insecure and dreaded being alone. At first, they were forced to meet discreetly and keep their romance away from the public, but in their circle of friends, they quickly gained a reputation as a fiery couple and for having the most spectacular fights over nothing at all. Despite this, there was an obvious attraction keeping them together and as time went on, they cared less and less about the repercussions an exposé of their affair would have on their careers. That exposé came in 1950 when a photo capturing them together at the London Palladium was printed on magazines and newspapers.

Sinatra’s career took the biggest blow; he fell out of favor with his more conservative fans who criticized him for being unfaithful to his wife and for being unfaithful to her with a woman who was considered by them as morally questionable. The negative publicity led him on a downward spiral that would leave him without a recording or film contract. It is possible that this turn of events hurt his pride and affected the psychology of the couple.

LISTEN OR BUY ON AMAZON:

In 1951, Nancy Barbato reluctantly granted Sinatra a divorce and he married Gardner in a small ceremony in Pennsylvania that same year. The idyllic honeymoon would not last; the day before the wedding, she received a letter from a prostitute claiming to have been sleeping with her sweetheart for months. The letter would leave her questioning Sinatra’s faithfulness. 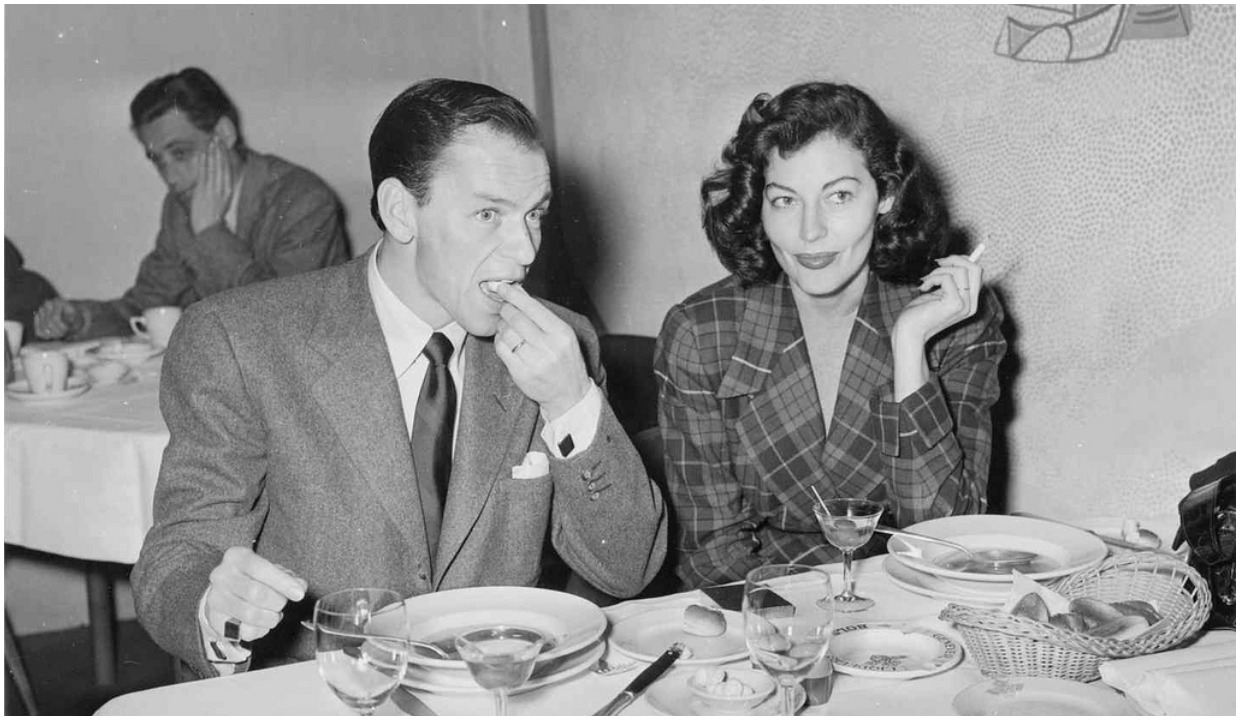 In August 1951, Gardner and Sinatra were at the Cal-Neva Lodge in Lake Tahoe, a casino-hotel where he often performed and of which he was a shareholder. The two drank copious amounts of champagne and had a huge argument. About 15 minutes later, Sinatra took a handful of sleeping pills. When he came to, Gardner was in his room worried sick. She readily forgave what would be the first of his suicide attempts, followed a few weeks later by another in his own house, after another one of their huge fights.

Gardner dreaded time on film sets and had regular one night stands. On the other hand, there was at least one reported incident of Sinatra re-igniting his affair with Lana Turner just to spite Gardner. In 1953, Sinatra visited his wife in Africa on the set of Mogambo; she told him she was pregnant with his baby. Sinatra was ecstatic but Gardner secretly flew to London to abort it behind his back. When the Mogambo shoot wrapped, she also moved to Madrid to pursue an affair with Spain’s most popular bullfighter, Luis Miguel Dominguin. A year later, she filed for divorce.

Heartbroken, Sinatra slashed his wrists, dreaming perhaps he would wake up to his wife sitting beside his hospital bed. She never showed up. He granted her the divorce in 1957. Before then, he made numerous attempts to win back her love, always unsuccessful. His 1957 album Where Are You?, one of the saddest concept albums of ballads in his discography, is an outpouring of grief and emotion that is representative of this point in his life.

The separation and break-up were savagely documented by the press and the coverage unexpectedly softened and humanized the image of the cocky Sinatra. The increase in popularity meant he was able to land a role as Maggio on Fred Zinnemann’s From Here to Eternity (1953), which led to unexpected praise as a “serious actor” and an Academy Award for Best Supporting Actor. Some say that it was Gardner who secretly begged the producer to screen-test him for the film, claiming that if he didn’t, Sinatra would kill himself.

Years after their divorce, while filming Von Ryan’s Express in Rome in 1965, Sinatra invited Gardner to the villa that had been provided to him by the production team. Friends who joined them for dinner could still tell he was trying to rekindle their relationship all those years later and actor Brad Dexter recalled how painful it was for Sinatra to see the woman he adored destroying herself with booze.

Gardner had, in fact, become an alcoholic. Despite her being the one who filed for divorce, many believed the event took a huge emotional toll on her. As the years went on and her beauty started to fade, she withdrew from the public and lived the rest of her life far from camera lenses. She even stopped taking calls when a stroke left her unable to speak – except the ones from her old lover, who did all the talking for her. As the nurses held the phone to her ear, he would repeat that he loved her and that growing old was terrible.

Every year after their divorce, he would send her a floral bouquet and she kept a photo of the two of them together from the early days of their relationship on her bedside table. She died on January 25, 1990, at the age of 67; he died eight years later, aged 82. Their deaths filled the front pages of newspapers around the world.