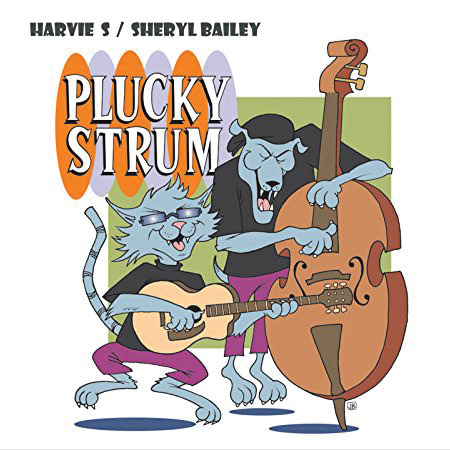 Although guitarist Sheryl Bailey and bassist Harvie S have been neighbors for years and have gigged together, recording a duo session together is an idea that didn’t materialize until Bailey acquired a new, custom-made acoustic guitar. An informal jam one day lit the spark, and the heartfelt, intimate and stylistically diverse Plucky Strum is the result.

The relaxed mood that permeates most of the tracks is particularly evident on Bailey’s “Broken Glass,” a ballad rhythmically tied to gently sashaying bossa pulses. The guitarist leads the way throughout, her lustrous chords and single-note soloing sketching the tune’s meditative theme while the bassist remains in a supporting role. On Harvie’s good-natured “Bluzin’ F,” he and Bailey partner on tight unison lines that lend the piece a sense of formal structure. Throughout the album, though, the duo mostly switch between lead and supporting roles while milking the blues dialect to full effect. Bailey’s folksy “Woods Talk” finds the guitarist at her most expressive, spinning off steely chords and blues-inflected solo lines while Harvie displays the full tonal range of his double-bass, from plucked staccato notes in the outer limits of his instrument’s upper register to the rich, resonant tones at the bottom end.

Two tributes are album highlights. “To Bea,” written by Harvie to honor his late mother, is a vivacious, up-tempo bossa romp. “Charlie Haden,” another work by the bassist, is an homage to the late jazz legend that radiates a happy, upbeat spirit.
Regardless of their stylistic orientation, the 10 performances captured on Plucky Strum are uniformly warm-blooded, refreshingly spontaneous and occasionally truly virtuosic. —Mark Holston

The Bad Plus Joshua Redman