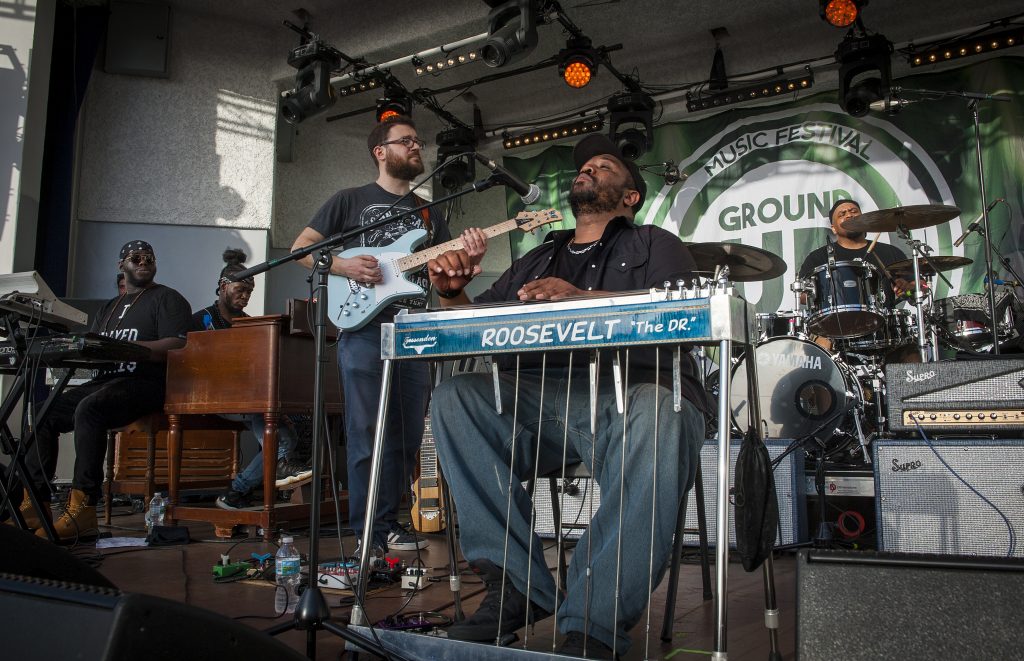 Saturday at the second annual GroundUp Music Festival at the North Beach Bandshell on Miami Beach sounded like the day (and evening) of the groove — and the perils of too much of a good thing.

There was, still, diversity. A program that, in the span of a few hours,  includes the horns-and-voices, R&B-rooted sound of Emily Estefan; the Sacred Steel tradition-gone heavy blues/rock/funk of pedal steel wizard Roosevelt Collier and the ferocious live /electronica experimentation of Swiss drummer Jojo Mayer’s Nerve, can hardly be considered homogeneous — and yet. The law of unintended consequences might have caught up with the festival.

Just as performances have been programmed between the Bandshell and the Park stages so there are no overlaps, sets have been, by design, shorter. That means that the artist has less time to impress and, it’s only human, when in doubt (and the offer here is large and varied), they might tend to punch as hard as they can and as repeatedly as they can.

Multiply that over several hours and certain sameness (and ear fatigue) begins to set in.

Mayer’s concept might be indeed brilliant — but perhaps not to ears that had been already beaten into submission.

In contrast, Snarky Puppy’s set (they were the penultimate act yesterday and today) was marvelously constructed, with variations in mood, dynamics and tone that created a narrative all of its own. Then again, they are the house band, so to speak, play all three nights (they close the event Sunday) and so they can and do take their time to tell their stories.

Another highlight Saturday was the quartet featuring Joshua Redman, Lionel Loueke, Larnell Lewis, and Michael League — even if the band also tiptoed on the groove overkill line.

This is what the better festivals do: not only do they offer a rich sampler of artists and styles but they also create the vibe and setting for special collaborations. This was the first time this foursome played together in public – but they didn’t settle for well-worn standards or two-chord vamps. Underscoring League’s stated preference for “not just sharing the stage but … each other’s music,” the group explored pieces such as Loueke’s “Aziza Dance” and Redman’s “Hide and Seek” and did make the occasion, and the music, special.

Sunday’s program promises greater variety and more surprises. Cuban guitarist and singer Eliades Ochoa, scheduled to perform with percussionist Sammy Figueroa, was taking in the sounds and sights of the Festival Saturday and while he said he had traveled alone, he also hinted there will be a group accompanying him tomorrow.

Locals know that “Only-in-Miami” is not something usually said approvingly. This promises to be that rare exception.