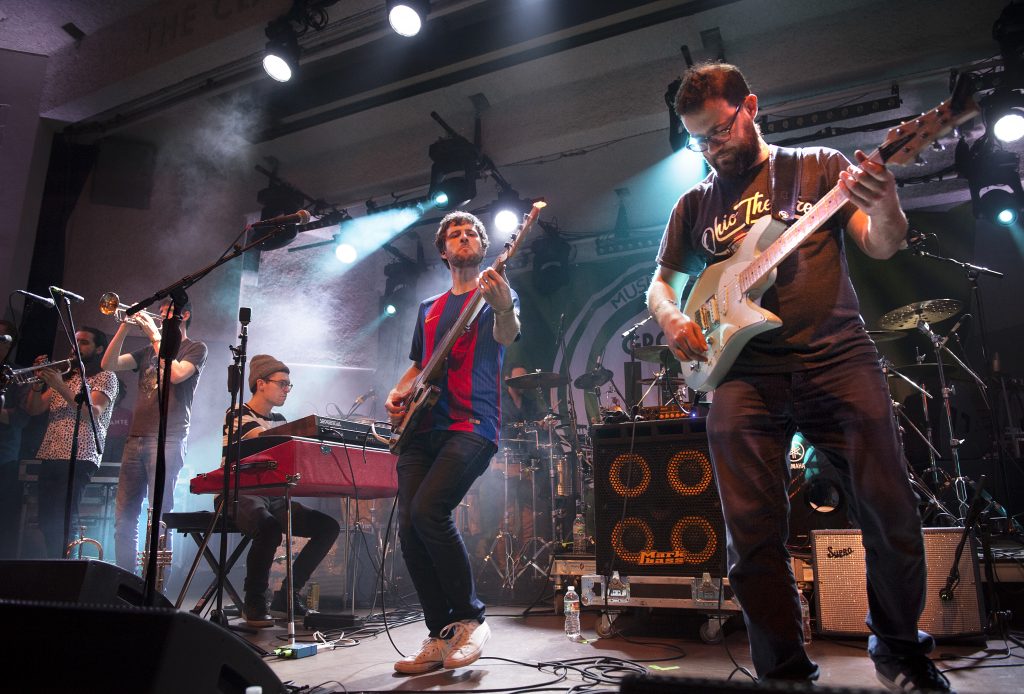 By the time Snarky Puppy finished opening their set, unspooling one of its long, engaging musical tales, full of catchy melodies and various asides and side trips, night had fallen over the North Beach Bandshell on Miami Beach but still, it was 75 degrees, there was a slight breeze from the ocean and palm trees were swaying just so. You can’t blame Michael League, the band’s leader, composer and bassist for being – let’s say – uncharitably truthful as he welcomed the audience to the second annual GroundUp Music Festival in “temperate Miami Beach while all our friends are freezing their asses back in New York.”

And yet, the great setting is only part of the story.

The three-day festival, produced by GroundUp Music, the label created by League, is an ambitious event that spills out of the bandshell grounds into the adjacent park. It includes two stages offering alternating performances, an after-concert late-night program at a local hotel, workshops, and talks. The setting also includes food and clothing stands and, if you must pace yourself, hammocks hanging between the palm trees.

“The festival is like a natural culmination of what we’ve been building for the last 15 years,” said League in a conversation backstage. “Snarky Puppy is a band of course, but really what we’ve been trying to do is build a community. And we have built it from the ground up […] we know these artists, not just on our label but artists that we hang and collaborate with and we were asking ‘How can we bring all these people together for our audience?’ A festival, of course. It was kind of a natural progression.”

Musically, the GroundUp Music Festival is a happily untidy mix of styles and approaches. For starters, Friday’s program zigged and zagged from sets by Buika and the Paris_Monster duo to those by the worldly Banda Magda, Snarky Puppy and the spellbinding Bela Fleck with his trio.

But still, something distinctive about last year’s event was the low key collaborative attitude of seemingly every artist participating. The Festival suggested a celebration of not so much genre-crossing but, actually, genre-ignoring, something that was emphasized by spontaneous, why not? collaborations. This year artists might take it a step further, said League.

“Last year it was all spontaneous,” he explained. “I think this year certain artists have talked to other artists and they’ve learned each other’s songs. And to have an artist like Lionel Loueke learn a song of Magda’s and then play it is for me cooler than jamming over one chord because then people are not just sharing the stage but they’re really sharing each other’s music.”

The tone is set and this has only started. This is Saturday’s program.