NEC Celebrates 50th Anniversary of its Jazz Studies Department; Luciana Souza Residency: GRAMMY-winning singer/songwriter Luciana Souza was recently at her alma mater, the New England Conservatory (NEC), for a week-long residency, during which she sad down for a conversation with NEC Master’s student Stephanie Borgani, which you can watch via the player below. NEC is celebrating the 50th anniversary of its renowned Jazz Studies Department this year and will showcase its vibrant legacy via a year-long celebration including concerts and events in Boston, New York City and Los Angeles, featuring many of the school’s distinguished jazz alumni, faculty, students and special guests. Click here to find out more.

Jane Monheit Confirmed as Jazz Institute at Brevard’s 2020 Featured Artist: The Jazz Institute at Brevard has announced jazz-pop vocalist Jane Monheit as this year’s featured program. The summer camp program will take place on June 8-18 in the beautiful Blue Ridge Mountains of Brevard, North Carolina, and applications are now open. During the two-week program, Monheit will host masterclasses, and join students and faculty in a live performance to anchor the program. “This is an incredible opportunity for our students to learn from someone as talented and accomplished as Jane Monheit,” said Micheal Dease, GRAMMY-winning trombonist and director of the Jazz Institute at Brevard. “She is a great addition to our all-star faculty, and it’s an honor and a privilege to have her as our featured artist.”

Jazz Workshop in Stellenbosch, South Africa: The Cape Town Music Academy and Toyota US Woordfees are calling on musicians to attend a free workshop at Paul Roos Gymnasium in Stellenbosch, South Africa, which will take place on March 6-8. The event forms part of the Youth in Music Excellence initiative, which seeks to develop, shape and elevate young the skills and pursuits of young musicians. The workshop will consist of a series of educational and performance workshops, including group lectures, ensemble and individual work. International lecturers will include some of Europe’s top jazz professionals, including the musical director of the Stockholm Jazz Orchestra Fredrik Norén and German bassist Martin Zenker, among others.

Gregory Porter Drops New Valentine’s Day Single: Singer/songwriter Gregory Porter has shared “If Love Is Overrated,” a heart-warming new single from his forthcoming sixth studio album, All Rise, which will be released on April 17 via Blue Note. Porter explains via a statement that this song is “a love song to love, in a pessimistic environment. It is the energy that excites the heart and the head without this love being announced to the world… a secret admiration even.”

Verve/UMe to Reissue Nina Simone Lesser-Known Classic: Verve/UMe is reissuing Nina Simone’s 1982 album Fodder on My Wings. An essential recording of Simone’s late-era, the album has remained relatively obscure within her universally acclaimed oeuvre despite the musician/singer/songwriter herself considering it one of her best ever. Fodder on My Wings will be released on April 12 on CD and LP, and made available digitally for the first time in an expanded version featuring three bonus tracks from its original recording session.

Boney James Announces New Album: Saxophonist/composer Boney James is set to release his new album, Solid, on April 17 via Concord. The album follows his acclaimed 2017 release, Honestly, and features eleven tracks, all of which were produced and written or co-written by James. “This record really flowed at an unusually quick pace,” Boney says via a press release. “There was a lot of positive energy in making this music. Solid is a very upbeat record. As I was writing them, these songs put a smile on my face.” 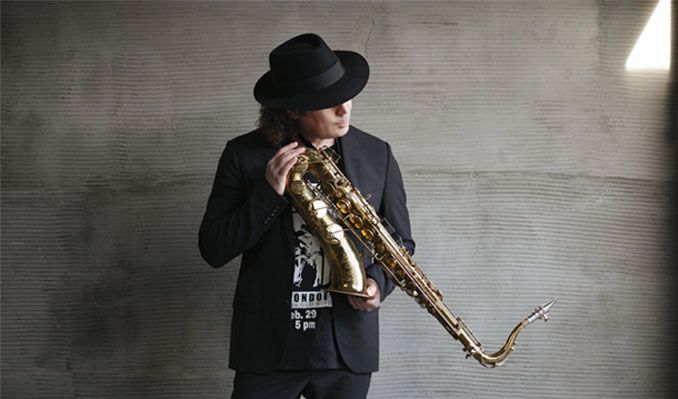 The B.B. King Blues Band Announces Partnership with The B.B. King Estate: The B.B. King Blues Band has partnered with The B.B. King Estate to bring the world The B.B. King Experience, the band’s new working name. With over 100 years of cumulative experience between them, the band – with trumpeter James “Boogaloo” Bolden, bassist/vocalist Russell Jackson, guitarist/vocalist Wilbert Crosby, keyboardist Darrell Lavigne, vocalist Claudette King and trumpeter Myron “Big Jack” Jackson – the “Experience” not only supported King but they would start each show by performing on stage before the guitar legend came on-stage. In addition to their upcoming world tour, the single “Rock Me Baby” featuring George Benson, Tito Jackson and Claudette King will be released this summer.

Back Lot Music Releases Robert Glasper’s Original Score to “The Photograph”: Back Lot Music has released the original motion picture soundtrack to Universal Pictures’ The Photograph today. The soundtrack to the film features an original score by Robert Glasper and two new songs by Lucky Daye and H.E.R. The Photograph is a romantic drama starring Issa Rae and LaKeith Stanfield. It is written/directed by Stella Meghie and arrives in theaters today, on Valentine’s Day. “It was an honor to be a part of this amazing film,” says Glasper via a statement. “Working with Stella was great. She allowed me to completely be who I am musically without compromising her vision. It was the ultimate win, win!”

Nona Hendryx Brings Multisensory Sun Ra Tribute to NY’s Metropolitan Museum of Art: Acclaimed musician/author Nona Hendryx and Harlem Stage have partnered with New York’s Metropolitan Museum of Art to present “Nona Hendryx and the Disciples of Sun Ra in The Temple.” This multisensory performance and tribute to Afrofuturism pioneer Sun Ra will take place inside the museum’s Egyptian Hall, the Temple of Dendur in the Sackler Wing, on February 29. The program will be led by Craig Harris and feature Sun Ra’s songs as well as original compositions, with costumes created by Virgil Ortíz and dance pieces choreographed by Francesca Harper. The event is part of a yearlong, citywide celebration of Sun Ra and his legacy, The Cosmic Synthesis of Sun Ra and Afrofuturism.

Fatoumata Diawara @ NY’s Town Hall, February 21: Malian singer/songwriter/guitarist/actor Fatoumata Diawara will bring her blend of traditional African music and elements of Western pop, rock, Afrobeat and R&B to New York’s Town Hall on February 21. She will be fronting a quintet featuring electric guitar, keyboards, bass and drums, and performing songs from her most recent album, Fenfo, which was nominated for a Best World Music Album GRAMMY. Opening the show will be Los Angeles-based Guatemalan singer/songwriter Gaby Moreno.

3rd Annual Luther Vandross Birthday Event @ Manhattan’s Joe’s Pub, April 19: FANDROSS is an annual event celebrating the continuing legacy of Luther Vandross. Its third edition will take place on the eve of what would have been the singer/songwriter 69th birthday, April 19, at Manhattan’s Joe’s Pub. The event will feature many of his talented friends and musical colleagues for a soulful exploration of his life and music. The lineup is set to include Nat Adderley, Jr., Alfa Anderson, Fonzi Thornton, Brenda White-King, Michelle Cobbs-Hardy and many more.

Jazzkaar (Tallinn, Estonia) Announces 2020 Lineup: The Tallinn International Festival Jazzkaar, the biggest jazz festival in the Baltics, has announced the lineup for its 31st edition, which will take place in Tallinn, Estonia, on April 17-26. Its main program is marked by a strong female presence and will include a total of 40 groups (16 of which are led by women) from 18 different countries, offering a wide selection of music genres and actively promoting jazz music among the general public. The lineup includes Cécile McLorin Salvant, Dee Dee Bridgewater, Airto Moreira, Jamison Ross and many more. This year, Jazzkaar will also present a one-time-only special project, “Antarctica 200,” which crosses geographical borders in featuring audio material recorded in the polar desert.

Pianist/composer Carla Bley leads her longtime trio with saxophonist Andy Sheppard and bassist Steve Swallow on their third ECM release, Life Goes On. Her compositions on this album – which was produced by Manfred Eicher and recorded in Lugano, Switzerland – take the form of three suites, which traverse a wide range of moods, from the deeply reflective to the darkly witty.

Alterations finds vocalist Robin McKelle delving into the catalog of some of the most celebrated women of songs. The LP features interpretations of music written or associated with a diverse range of artists – including Amy Winehouse, Dolly Parton, Adele, Billie Holiday – through the lens of jazz, plus one original composition, backed by an ensemble of consummate musicians, including co-producer/pianist/arranger Shedrick Mitchell.